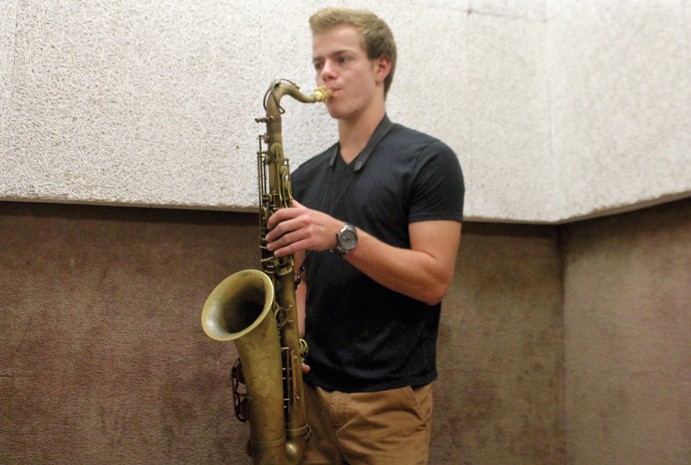 Jordan Leicht has made CSUN his second home, finding the support he needs among his fellow jazz musicians. Photo credit: Yocasta Arias

They say the best artists in through history started with humble beginnings. Jordan Leicht began his saxophone career being denied to play his first choice of instrument: the piano. With not many options outside of some recorders, the fourth grade Leicht saw a interestingly shaped instrument and thought “that looks cool,” and picked it up and started his career.

Now 19 and a sophomore at California State University, Northridge, Leicht passionately pursues his love for the saxophone and is putting his everything into one life’s oldest pleasures: music.

Growing up in a family of five, Leicht was surrounded by music since his birth. His father played the guitar and piano, his mother played the clarinet and his brothers both were in their school bands.

Still new in his instrument of choice, sixth grade Leicht was told to try out for the jazz band by his teacher Mike Gangemi.

Nervous and lacking deep musical understanding, Leicht knew he could only play about a page of audition song and made Gangemi aware of it.

“I seriously got placed in the top seat in second tenor of the jazz band and to this day I still am amazed that happened,”said Leicht.

In high school Leicht was surprised to find the same teacher, Gangemi as the band director. Wanting closure, Leicht asked Gangemi why he chose him out of everyone despite how bad Leicht knew he was at the time.

Gangemi said he saw confidence in him. The director knew kids could learn how to technically play jazz well. But there’s more. They needed soul. Gangemi saw that in Leicht at that age.

Leicht continued to play throughout high school and realized his passion for his instrument through an experience with his brother.

His older brother, 22-year-old Steven, was a chemical engineering major at UCLA and frequently played jazz piano in his school. The younger Leicht noticed that in his older brother’s time at UCLA, he simply had no time for piano and would only play scarcely on holidays or breaks.

Leicht was scared straight with the fact that his life could potentially turn out that way if he pursued a degree in an engineering field.

“I freaked out when I realized this,” said Leicht. “I was like ‘oh my God!’ and I discovered my passion for music when i realized I never wanted what happened to my brother to happen to me.”

Since then Leicht knew exactly what he wanted to do with his life, and he knew out of all the colleges available to him which he would choose.

“Other schools always foster this competitive atmosphere,where everyone is trying to gun for first chair and be the best,” Leicht said. “Here at CSUN, it’s seriously like having a family.”

Within this family, Leicht has grown with people and grown increasingly more in sync with their playing styles.

When describing what playing jazz is like, Leicht compared it to communication.

“Just as easily as I can talk to you, a full ensemble can do the same,” said Leicht. “When a group of us are ‘talking’ during a solo and we find this perfect sync where everyone is in the moment, it’s something you can tangibly feel.”

When he was new to CSUN, Leicht encountered Gary Pratt, an avid and highly skilled musician as well as the semi-retired head of the jazz department here at CSUN. One day Pratt asked Leicht if he wanted to meet up and play for a bit, and Leicht was astounded at Pratts knowledge and skill of his craft. Since then Pratt and Leicht have meet up weekly to play together.

“Even the times when I don’t receive feedback, playing with a musician of his caliber is such an honor that i learn so much just from the experience,” said Leicht

For the past four months Pratt and Leicht have been spending this time together playing and Prat has seen Leicht grow and talked to him about politics, life, and everything else, they’ve developed a friendship.

High school friend and now CSUN classmate 19-year-old Asano would always count on Leicht as a musician and a friend.

“He’s a very relaxed, chill person, and has a great work ethic as opposed to someone who knows they’re good and is lazy,” Asano said. “He works his [butt] off.”

Although fun and challenging, Leicht is fully aware of the stigma that plagues music majors; there’s no regular jobs out there for them.

Knowing this Leicht still plans to pursure his passion and after graduating he hopes to join different bands with his friends he’s made here.

Continuing he hopes to write music these bands and eventually get picked up by a major label and start touring.

“Obviously you can’t tour forever, and I know I’d want a family eventually, so i think my endgame goal is to give back to the community and become a professor and teach what I’ve learned, and who knows, maybe even one day become the head of the jazz department,” said Leicht.