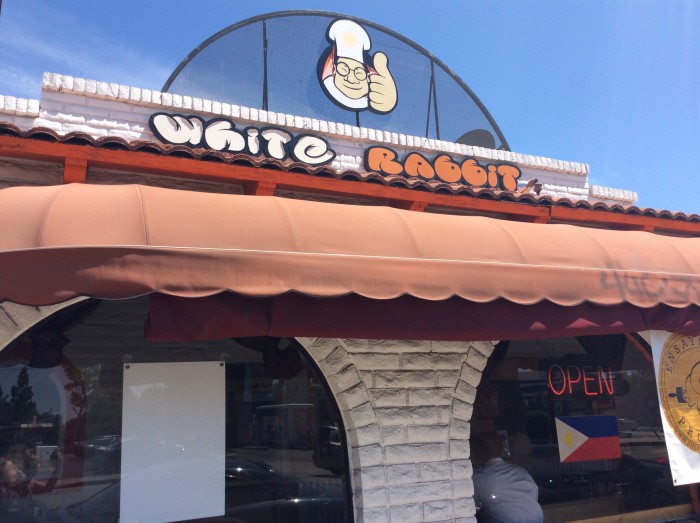 If there’s one thing you will find in the valley, with the exception of an extreme temperature difference, is the diverse food scene.

“We noticed a niche that needed to be filled in the food truck market at the time. We had Korean Mexican fusion, Japanese fusion and all these different kind of things. We always knew Filipino food was good, it would compete, only problem was no one was competing.”

The three were successful at such a fast rate that five months later the trio opened the café in Winnetka.

“That was a niche we tried to fill,” Du says. “There’s a bunch of stereotypes that Filipino food is unhealthy and greasy. We are just trying to change that, and obviously we want our culture to be mainstream. We want to see Filipino shops everywhere, but it starts with the first step.”

Other than the low prices, what makes the food at White Rabbit so special are the traditional Filipino dishes merged into modern L.A. street food, specifically Mexican, for the southern Californian palate.

“Everyone’s familiar with tacos and burritos,” Du states. “It was the best way for us to introduce Filipino food to the masses.”

One of their more popular dishes that has put White Rabbit on the map is the Sisig burrito. It’s a filling but not overwhelming well-seasoned, crispy pork cooked with onion and jalapeno, rolled up with rice and a fried egg in a tortilla.

The zesty flavoring is a nice contrast to the pork and egg that gives it a fresh, light taste. Traditionally the Sisig meat is cooked with pig’s head, however knowing cheeks and cartilage wouldn’t sound appetizing to a majority of people here, the boys decided to use pork belly instead.

Two tables away from me sit a happy American-Filipino company enjoying a variety of dishes from the menu. Karen Miraflor recommends the Tinola Fried Chicken.

“It used to be a chicken stew in the Philippines, and [Du] took it and fried it. Still tastes like the stew from our childhood, but it’s even better now ‘cause it’s fried!” she continues. “With the food here, it’s one of those situations when you take something classic and put a spin on it and make it even better than the original.”

Victor Miraflor, a happy customer and friend of Du’s, says the secret behind the good food at The White Rabbit is Du’s love for food at the end of the day. “You gotta love what you’re doing when you’re in the sixth year of doing it,” Miraflor says smiling.

Whether you are hungry and want quality street food or need to quench a thirst with some iced drinks stop by White Rabbit Fusion Cafe.