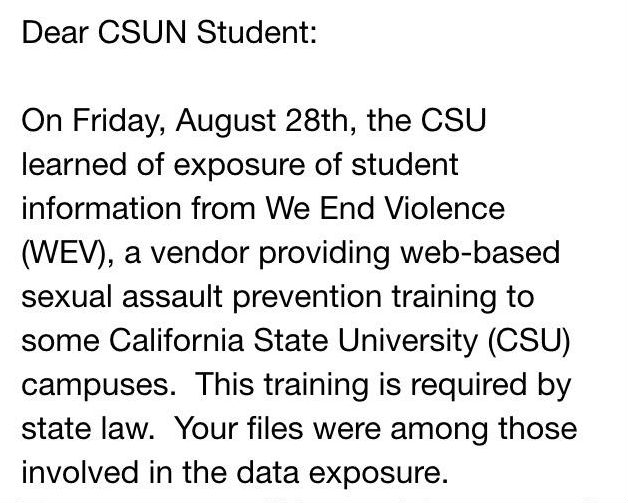 Mass emails were sent to students who completed the Agent of Change online course to notify them of the recent data exposure.

Personal information of CSUN students who completed the online “Agent of Change” sexual assault awareness course has reportedly been exposed, according to a mass email from CSUN Vice President William Watkins sent out earlier today.

The “data exposure”, according to the email, did not leak social security numbers, drivers licenses or credit card numbers.

However other kinds of personal information such as name, age, gender, race, relationship status and sexual orientation that students may have provided while completing the course were compromised, as well as log-in and password information that were used to sign in to the course.

Students were encouraged to change online passwords in case their Agent of Change password was also used for their social media or email accounts.

Though the email gave few details about how the data exposure happened, the email explained the leak came from the vendor, We End Violence, that provided the online course.

According to the We End Violence website, WEV provides interactive educational services to address violence prevention.

All students involved were told to direct questions to WEV and not the university.

Reaction from some students who received the notice has been largely critical toward the university so far.

23-year-old CSUN student Carlos Alberto, who received the email earlier, believes the university is responsible for part of the exposure.

“I think it’s kind of messed up that something the school forced us to do, which we didn’t have a choice… it really stinks that we have [this] problem that now that our information is out there,” said Alberto. “It’s almost as if you hire somebody to do some work but their worker breaks something in your house or has a problem…it doesn’t really matter, it’s your point of contact…that should be held responsible.”