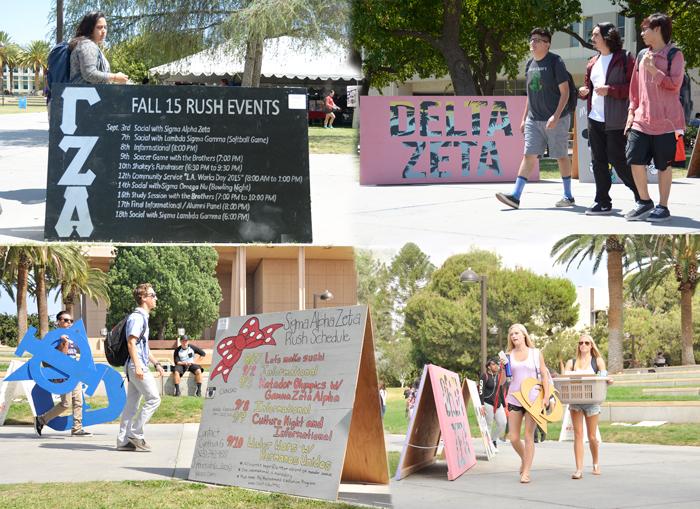 From Clockwise: Fraternity Gamma Zeta Alpha, and sororities Delta Zeta and Sigma Alpha Zeta were amongst the many Greek houses tabling at the Meet the Clubs event. Photo Illustration: Raul Martinez

As one of the 12 recommendations that were approved by CSUN to incorporate more peer-to-peer mediation as well as seminars for hazing, alcohol and related topics, Greek 102 is intended to give the members of the Greek society a clearer view of what is happening in their community.

“It’s a new program, so it will continue to grow and be developed to fit more specific needs,” said Greek Adviser Jamison Keller.

The newly instated program, a continuation of Greek 101, allows active members of fraternities and sororities to discuss current policies in depth and go over what they were previously taught.

In an attempt to restore the reputation of Greek life on the campus, many of the houses came together during their afternoon session on Aug. 16 for an hour and a half presentation followed by peer mediation.

“Our culture has somewhat changed. We sold alcohol and sex,” Keller told the audience, referring to what he called the three B’s — beer, babes and bucks.

After the death of 19-year-old Pi Kappa Phi pledge Armando Villa, CSUN put a halt to all Greek pledge activities, citing the death as a possible hazing incident. Hazing is not only against CSUN policy, it is also against the law.

While the “cease and desist” letter sent by Dr. William Watkins, vice president for student affairs, panicked many active Greeks last October, many were happy their programs weren’t terminated completely.

“When we heard the news, we were freaking out. We had no idea what was happening,” said Jeraldin Islas, member of Lambda Theta Alpha. “It was a lot of anxiety.”

“The year we took off allowed us to work internally within our chapters and to develop stronger bonds with each other,” Keller said.

During the upcoming semester, pledge hopefuls will also see a change in the recruitment process. Recruiters must attend more informational seminars and complete more tasks so they can teach new pledges about the culture of the Greek societies, what they expect from their pledges and what the pledges can offer their house.

According to Keller, this new strategy is designed to separate good potential candidates from those who are simply not right for a house.

“I think we have strayed somewhat from our recruiting efforts and allowed people to get in for the parties, the social [life] and the hooking up culture,” Keller said, “and we did not do a good enough job weeding those [people] out during the recruitment process.”

Keller commented on the accomplishments from many of the houses.

“There’s a ton of good things this community has done,” Keller said. “Raising thousands of dollars for charities, and how they are not only excelling in education, but also taking many leadership opportunities that have come across their way — including on-campus affairs and resident advisors positions, and even continuing to contribute to the campus after they graduate.”

While Greek 102 was just approved this semester, it has already received good feedback from many of the houses.

“We actually got a lot of positive feedback from the people I had in my group,” said Carrie Morgan, who disaffiliated herself for recruitment purposes. “They felt that it was helpful, especially because we asked them for feedback. Every year we want to go over new information, not the same old cookie-cutter type of lectures and activities.

“We want to make it inclusive and relevant to what we are experiencing now, what we are going through now, so we can use [Greek 102] to better our system,” Morgan said.

This new program and the upcoming seminars allow members to listen, learn and participate instead of sitting through lectures where information is fed to the audience.

“This program is for you [Greek Members], you are able to propose new ideas, you are able to think together,” said Patrick Bailey, director of the Office of Student Involvement and Development.

“We want to be the best in the community,” said Keller. “We are certainly the most diverse.”