METALab: Innovation through art and technology 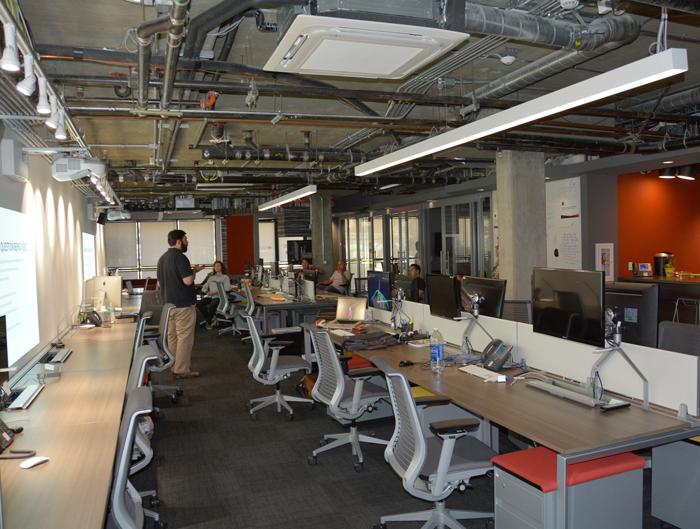 Members of METALab have a free discussion during one of their meetings. The new visual lab has moved towards promoting off-campus, interdisciplinary work opportunities for students. Photo credit: Giovanni Garcia

In its decision to unify the school’s image, CSUN solicited help from students and staff in the Computer Science and Art departments to convert the old website’s platform into a new one.

At the beginning of November 2014 the university, the CSUN Center for Visual Communication [VISCOM] and Pioneering Technology set out to create a new online image for CSUN; in the process METALab was created.

“They decided to create an essential web team to help coordinate, design and develop the conversion of the old [web]site to the new site, so these entities were formed together to create a team,” said Dave Moon, co-founder of VISCOM.

After the website was upgraded and the team was no longer needed, Moon and a group of consultants decided it would be beneficial for the team to remain assembled, creating METALab – the Matador Emerging Technology and Arts Lab.

With the creation of METALab, Pioneering Technology disappeared and VISCOM made the decision to no longer take projects from on-campus patrons.

“We didn’t quite know what to do with VISCOM,” said Moon. “We found that there were a lot of opportunities outside of campus because the current make up of VISCOM clientele and partners evenly splits in half, on-and-off campus.”

VISCOM finished most of its on campus projects but some departments according to Moon did not want to continue. “There was a couple projects for housing, police services, the staff award project, and human resources,” he said.

“We weren’t really expanding on the external projects because there was a lot of need from on campus projects so we decided that there might be more opportunities outside of campus,” Moon added.

Moon noted it was a mutual agreement and was left completely to the client.

METALab was officially launched in March 2015. It was moved to a new location on Reseda Boulevard.

The METALab establishment is an open area with no offices and plenty of seating space. Each conference room is an idea board and all four walls are dry-erase friendly.

With a sleek and modern design, METALab provides a steady paced environment for all staff and students to easily develop, share and produce ideas.

“We wanted to take elements from Pioneering Tech and VISCOM and put them together; trying to create an interdisciplinary opportunity for students to work together on cool stuff that related to technology and art at the same time,” said Steven Fitzgerald, METALab Co-Director. “The structure is lateral in this environment. There are no offices, and everybody is an equal. People have the choice to either sit down or move around. I move around about once a week and that allows me to hear different conversations.”

Part of METALab’s success comes from their customs, including a way of working called ‘agile’. This requires slow but steady release of features after a product is being worked on until the final product is finished and ready to share.

Every morning, METALab staff do something called a ‘stand-up’ which according to Alex Hernandez, a developer and designer for METALab, requires people in specific teams to “…stand in a circle and share information specific to their project, what they worked on yesterday, what they’ll work on today and any impediments.”

METALab recently launched a pilot application to the CSUN website named Faculty. Faculty is a tool for CSUN students and professors to easily engage with each other. There are three key components to the Faculty app including: profiles, stories, and research interest.

The profile feature provides a profile for all faculty. It includes classes the professor is teaching, their syllabus, and even a way to locate your professor.

The stories feature is a fun way to engage with faculty outside of the classroom. According to Hernandez, “Stories allows us to humanize faculty on campus and really get to know them at a deeper level and see what they do and why they do it.”

The last piece is the research interest which is still under development. Its possible launch date is in October. The features would allow for individuals to find fellow peers with similar interests; making it easier to find research partners.