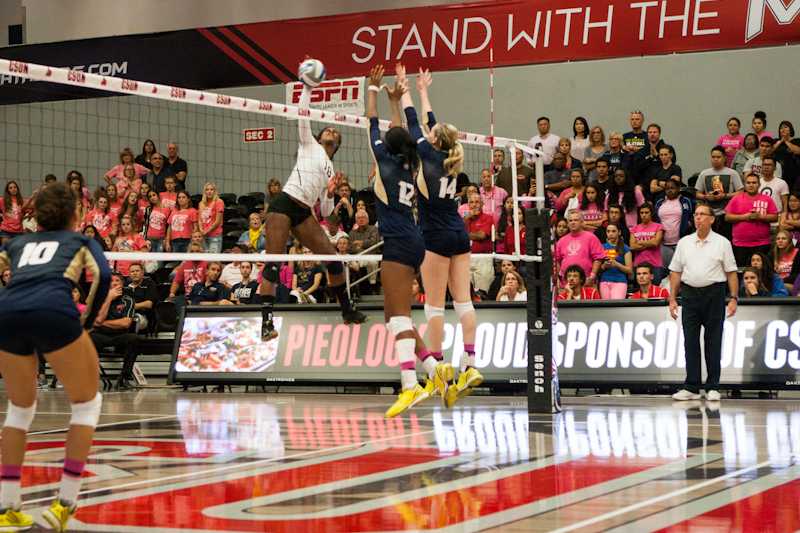 Following a win against Florida A&M, the Matadors could not gain traction, getting swept by South Dakota and the University of Arizona. Photo credit: File Photo/The Sundial

At 12 p.m., the Matadors and Coyotes faced off at McKale Center in Tucson.

Early on in the first set, the Matadors fell to a 10-2 South Dakota lead. The Matadors were able to bring the score within four at 21-17, following a seven point run. However, CSUN was unable to get any closer as South Dakota took the set 25-20.

Though the set ended with the exact same score as the first, set two brought the highest hitting percentage of all three for the Matadors: .296. With the score within one at 18-17, five consecutive Coyote points brought the South Dakota lead to six. After that there was no stopping South Dakota from taking the set.

Starting off behind in the final set at 8-6, the Matadors gave South Dakota 13 out of the next 20 points. With a 21-13 lead, the Coyotes took the final match with ease.

In their final match of the Invitational at 7 p.m., CSUN was swept by the University of Arizona.

Taking the first point with a kill from Dragovic, CSUN would then continue to tie the score nine times before succumbing to the Wildcats. As the closest of all the sets, the Matadors hit their match-high .146.

The second set completely changed the match for the Matadors. The Wildcats took an early seven point run (8-1), leaving the Matadors in a deficit they were unable to recover from. Hitting .061, CSUN got just seven kills over the net throughout the match.

In the final set, CSUN fell to an early 7-2 Wildcat lead. Arizona kept a consistent lead of at least five points and at 20-15 went on a five point run to take the set. The Matadors hit -.031, their lowest of the match.

Owens added nine kills (.074) while Haake had seven on 29 attacks (.069). Junior middle back Stephanie Serna Arreola added four blocks for the Matadors and Conati had 13 assists.

The Matadors travel to Seattle Washington to take on Saint Mary’s at 1 p.m. On Thursday Sept. 10.