Skajem tees off in a familiar place in CSUN 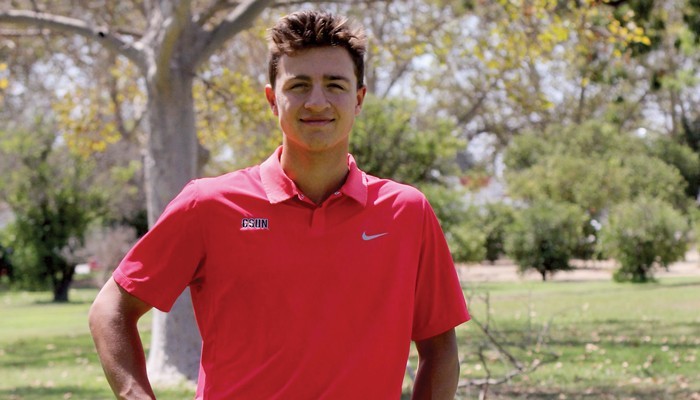 CSUN freshman golfer Tomas Skajem knows playing golf at CSUN will be different, but he is adjusting to the weather and courses in California. Photo credit: Yocasta Arias

Despite being born in London and raised in Oslo, Norway, 18-year-old freshman golfer Tomas Skajem is unfazed by the nearly-90-degree weather in Northridge, as he dribbles a golf ball off of his golf club.

Skajem’s comfort around the laid-back and warm environment at CSUN is not only due to his ability to adjust quickly, but rather because he has had a familiarity with the community dating back to his childhood, as he had family that lived in the San Fernando Valley, including an uncle who graduated from CSUN.

“On my mother’s side—she’s American—her sister and a lot of my family lives out here in the valley,” he said. “So I visited here a couple summers as a young kid, and always drove by the campus. I always had a small connection to CSUN.”

Those around Skajem have also noted his ability to adjust on the fly because of his comfort level in the area.

Even without his connection to the the valley and CSUN, Skajem has always been poised to be able to adjust to new environments because of his unorthodox upbringing in Europe.

“In my house there’s always been English and Norwegian,” said Skajem. “So for me it’s just normal daily routine.”

Splitting time between to soccer-crazed countries like England and Norway growing up, Skajem has also always been adept at putting on several proverbial hats, while staying true to his own interests.

“As a child I really loved playing bandy, tennis, soccer, golf (and) skiing,” he said. “But it really came down to location, my house was very close to Norway’s oldest golf course called Oslo Golf Club.”

That childhood enthusiasm for several sports not only helped him adjust to social norms growing up, but it was also instrumental in him ending up at CSUN.

“For Tomas, I spoke to him on the phone a few times,” Bracken said, who began recruiting Skajem after Skajem’s family sent over videos and emails of him playing golf. “It seemed like he had a pretty good attitude about golf, he’s pretty active with other sports and pretty well rounded. I got the sense that he would be a good fit.”

Now, as Skajem fiddles with his club and takes a few practice swings without actually hitting the ball, he reflects on the adjustment he has to make on the golf course.

“It’s a different game out here because of the weather,” he said. “I would say it’s about the same though, it’s just a different way to play golf.”

Off the course, Skajem is more confident and appears to relish the culture clash, especially considering the he grew up in a small town.

“Sometimes it’s nice knowing everybody,” Skajem said of his hometown. “But sometimes it can also get a little one-sided, it’s definitely nice to meet people from different cultures.”

At CSUN, Skajem not only gets to partake in traditional American experiences, but the diverse student body also allows him to experience several cultures across the globe.

“I have a roommate from Japan, and we can talk all night about our different cultures and different etiquette in our countries,” he said. “It’s absolutely fun.”

Although Skajem is enjoying a newfound social experience, he is still keen on the cultural challenges on and off the golf course.

“Back home it was put on a silver platter,” he said. “While here, you’re on your own, you have your own responsibilities. It’s pretty motivating.”

Nevertheless, Skajem is cognizant that he has a strong support system both at CSUN, in Norway and even in Boulder, Colo., where his older brother attends school.

“I enjoy having connections to different parts of the world,” he said.

As Skajem packs his golf equipment and hops onto his longboard—a staple at many universities on the west coast—he flashes his infectious smile to students passing by, as if he’s known them for years.