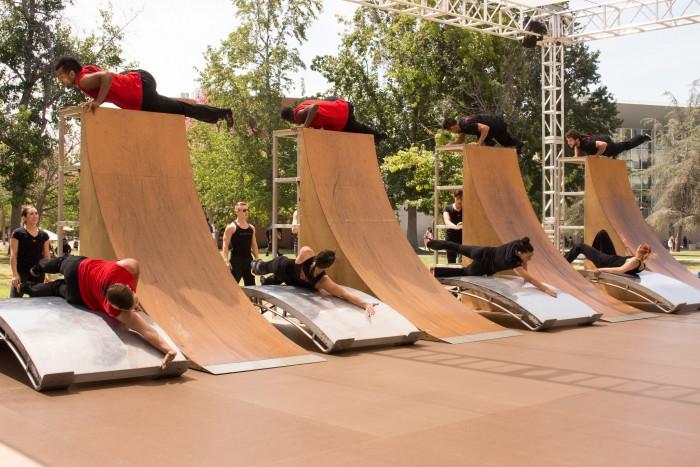 The Valley Performing Arts Center has a new season with a new approach to its marketing campaign. With more shows coming this semester and with more focus on student opinion, officials at the center are gearing their marketing toward students as well.

Beginning this season, the VPAC will look to improve its outreach to the CSUN campus for its new season, reaching out to students more than it has done in the past.

“We really wanted them to engage with the campus, because sometimes the campus and VPAC don’t have enough opportunity to interact,” said Thor Steingraber, the VPAC’s new executive director. “This is an opportunity for the students to get acquainted with them and actually dance with them.”

Steingraber enters his first year with the theater and Northridge community, and although he’s excited for the performances set for this season, the executive director is more looking forward to marketing to the campus community. In short, there’s a new mantra to the old establishment.

“By bringing them [students] here I’m really hoping to share with the general student population that performing arts has a much broader range than what you may think of at first,” Steingraber said.

When the center previewed its upcoming show “Diavolo,” it did just that.

“I saw them setting up and I thought it was going to be something with skateboards, because it looked like a skateboard ramp, but it’s very interesting to watch,” said Courtney Chelebian, 19, sophomore, public health major. “I’ve never seen anything like it before. They look like they’re doing stunting on stage, but it’s very artistic and I think it’s something very spectacular.”

This was something organizers of the VPAC had not done since it opened in 2011, and it’s what Los Angeles’ premier theater is doing about taking a new approach to marketing its shows to its community.

The first event of the new VPAC season will be “Diavolo,” a blend of dance and architecture that will captivate the audience like it did at the Sierra Quad during a sneak peek at CSUN’s “Meet The Clubs” event on Aug. 31 and Sept. 1.

When it opened in 2011, the primary focus for the center was to reach out to the entire Northridge community. Students were able to purchase tickets with a 40 percent discount, so attempts at reaching the student body were clear. But as VPAC marketing associate Joseph Solano would put it, the student discounts and perks weren’t reaching out far enough.

“There’s many levels to how we’re trying to attract the students, whether that be in employment, coming to events, master classes, with lectures, and programming, we’re constantly adding to the list,” said Solano.

The center offers not only ticket discounts to students, but employment as well as internships. On top of employment opportunities, the center also offers scholarships, most notably the Bayramian Arts Scholarship which offers $8000 to its employees and students, something Solano says shows the center cares about its employees.

“Our executive director, Thor, has given us a new tremendous opportunity,” said Solano.

Solano says the VPAC offers 50 percent discounts to both students and employees in an attempt to engage the community. Although discounts have existed prior to Steingraber’s tenure at the center, this year, it’s different. Students are able to pick up a seat for $12 at any time. Before Steingraber, students were offered tickets on a last minute, rush-basis to fill up seats. The center is also offering students a show of their own as well, catering to the demographic more than it ever has.

“People should plan their night out and get tickets in advance, especially if it’s an artist that they know that they want to see,” said Steingraber. “I think CSUN’s gonna love it.”

Steingraber not only compensates ticket sales to the student body, but also has selected shows specifically to fit the university demographic. For example, the VPAC has scheduled a showing of Dracula a few days before Halloween, presented during the day and with tickets going for five dollars. Dracula will also be performed by LA Theaterworks, which will add sound effects and props to the show.

Both Steingraber and Solano have made it clear that it’s their job to broaden their audience, and although it will take time to spread their new ideals and goals, it’s a start.