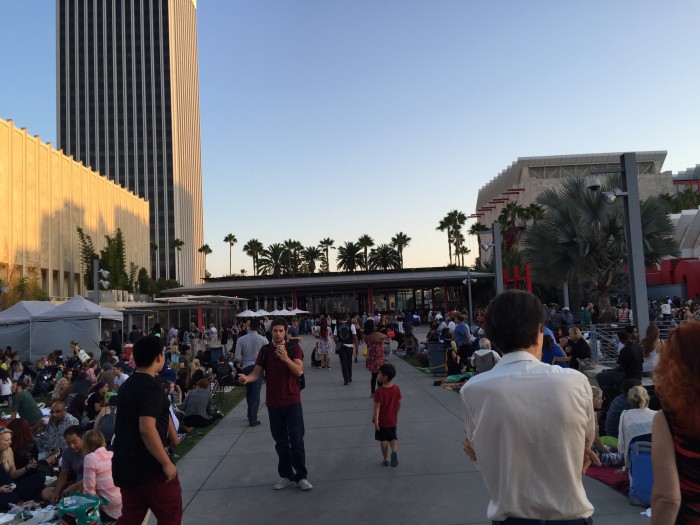 Events happening around Los Angeles are great ways to cool your jets. LACMA is one of the settings to relax and get away from the fast-paced world. Julie Gauthier/The Sundial

The first week of school is over, the jitters and anxiety of adding your classes is gone. The focus and mentality of acing all your classes has passed. Now you’re chilling in class, half-asleep looking at Instagram and other sites wondering “whats going on this week?” Well, fortunately you stumbled here, we got the info you need for what’s going down on and off campus.

What is it: There is no greater display of courage than to walk in front of your sober colleagues, and sing. Knowing full well you can’t sing, but you know it’ll get the respect of everyone in the room! Show your spirit and courage as well as your nostalgia by singing 90s karaoke!

The Cult of Luna took their time in making this album called “Cult of Luna”. The band did not want to perform live before they wrote the songs and music to this album. Let’s hope the music is worth the wait.

What is it: Imagine if you will, how romantic the beach is. Imagine yourself taking the person of your dreams there and how lovely everything is around you. You can hear the ocean, smell the salt in the air and watch the sunset. Now imagine that while watching people dancing to beautiful orchestrated music right next to you. Even more romantic right? Well that’s what you’ll get if you check out this dance show.

How much is it: Free!

What is it: Jazz, the one true american art form. We can boldly say we invited something original and it’s timelessly cool! Jazz speaks to all of us Americans even if it’s in the most remote part of our heart. Well here is a trio of Jazz musicians ready to spark the fire in that heart of yours with their modern Jazz! Trust me, it’ll be cray.

How much is it: TBA

What is it: The Church throws it back on Thursday. Most notably known for “Under the Milky Way” will rock the Roxy for a nice 80s night.

What is it: A group of CTVA students are throwing a fundraiser for their senior project. For only $5, you can help for a great cause for a TV thesis called the 19th Hole, a story about an elite country club in Palm Beach, Fl. It’s going to be a 20 minute pilot instead of the usual 10 minute which is pretty intense but we are really excited to the challenge.

Howl at the Moon

What is it: Dancing, the physical expression of things intangible. As much as we want, we’ll never be able to touch music, however music has always been able to touch us. We respond often time through dance. Merrill Garbus will be performing for us through a tyrant of music styles including pop and rock.

Where is it: Santa Monica Pier

How much is it: FREE!

The Church – will take the stage on September 10, 2015. The price of the tickets will range from $1.00 -$130.00. The concert will appear at the Roxy theater in West Hollywood. The Church has been recording over 20 years. Their most notable record is called “Under the Milky Way”

What is it: This may be a stretch here, but some of you reading this may remember a time when Netflix and Hulu(lets be real no one uses Hulu anymore) didn’t exist. When you would wait untill a specific time of the week and watch a single episode of a show, then rinse and repeat untill next week. Well, if you are of the type that can handle that then there is an event where previews for upcoming shows will be shown.

Where is it: The Paley Center for Media

What is it: A staple in American culture for dating; a dinner and a show. Well this is the latter half of the saying. Lonnie Marshall will be performing with his band on friday at Rosalind’s Ethiopian Resaurant. If you wanna hear good music and eat something too, check this out it should be fun.

Where is it:Rosalind’s Ethiopian Restaurant

How much is it:FREE! (food and drinks sold separately)

What is it: Where are my Political Science majors? This even is definitely for you, and honestly anyone whos interested in the Foreign affairs of America. This will be a panel where 2 of CSUN’s history professors will come out and lead a discussion about the relationship and conflict of US foreign affairs.

Where is it: CSUN University Club-Orange Grove Bistro

What is it: Is there anything classier than classical music? We are privileged to be able to say we have an incredible music program that reach other states and even countries. These amazing and talented students will be performing music ranging from classical all the way to Jazz and everything in between

Where is it: Valley Performing Arts Center

What is it: Who doesn’t like helping the homless? Who doesn’t like taking a shower and getting clean? Finally, who doesn’t like to laugh and have fun? If any of those questions apply to you, then you’ll hate this. A handful of L.A. comedians are doing a comedy show while giving the audience an opportunity to donate shampoos, conditioners, soaps, and other toiletries.

Where is it:M.I.’s Westside Comedy Theater

Art in the Park

The Spheres at MacArthur park

What is it: A nice day in the park, sun’s shining, got some food and friends, i think everyone can use more of these. Well, here’s your excuse to go do that! Thousands of schoolchildren have painted giant balls a put them in Macarthur park’s lake. as a part of a “visual makeover” from the art group Portrait of Hope.

Where is it:Levitt Pavilion at MacArthur Park

When it is: All day

Tree of Testimony LA Museum of the Holocaust

What is it: Every once in a while something serious and meaningful appears. spanning across 70 television screens are various interviews with Holocaust Survivors. Living history, being able to hear these people’s stories is something that would humble anyone

Where is it:Los Angeles Museum of the Holocaust

How much is it: FREE!

What is it: Reading, the lost hobby in our world of fast-paced tweets and 10-second Snapchats. Well, here we find ourselves causing to stop and check out this new released book Goddess of Love Incarnate: The Life of Stripteuse Lili St. Cyr. There’s something to be had about walking into a book store, stopping and reading for a while.

Where is it:Barnes & Noble at The Grove

Put your hands together

What is it: It just seems like there are never enough comedy shows right? Well I got good news for you! here’s one coming with a lineup of some of L.A.’s most hilarious stand-ups. This will also include backstage interviews!