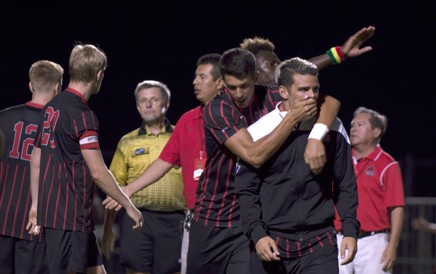 Pol Schonhofer holds Steven Manios after the 1-0 overtime loss due to a penalty call against New Mexcio at Matador Soccer field. Christopher Linares / The Sundial

In the 95th minute, the referees handed senior defender Trevor Morley a controversial yellow card, which led to the only goal of the game by New Mexico’s Chris Wehan.

Matadors senior goalkeeper Adam Hobbs discussed his frustrations and what he saw on the call, echoing multiple teammates sentiments.

Despite the shocking ending, CSUN had plenty of opportunities throughout the game, but could not capitalize on them.

In the first half, sophomore mid fielder Stevie Manios had two shots on goal which barley grazed the left post and senior midfielder Carlos Gonzalez who came in for Manios had a quick shot on goal that missed.

The Matadors out shot the Lobos 5-2 in the first half, but could not find a way to put points on the board.

CSUN head coach Terry Davila, who declined to comment about the referees decision, discussed those missed scoring chances which costed the Matadors goals.

“They’re a quality team, you have to take advantage of your opportunities, there’s not going to be a lot of them” said Davila. “We got unfortunate that we didn’t put one away.”

The Matadors had a devastating 16 fouls compared to eight for New Mexico.

The late yellow card was not the only action costing CSUN a victory, but senior defender Tanner Snedigar also picked up a red card in the 92nd minute making overtime an 11 on 10 disadvantage for the Matadors.

CSUN defender Morley believes a defeat like this will bring them closer together to snap their current three-game losing streak.

“I think we dominated the run of the play for most of the game.” said Morley. “It was a really unfortunate call, there’s nothing we can do about it. [We] just got to keep looking forward.”

The Matadors will have another opportunity to end their losing streak on Sunday against CSU Bakersfield (1-1-1) at 6 p.m. on Matador Field.