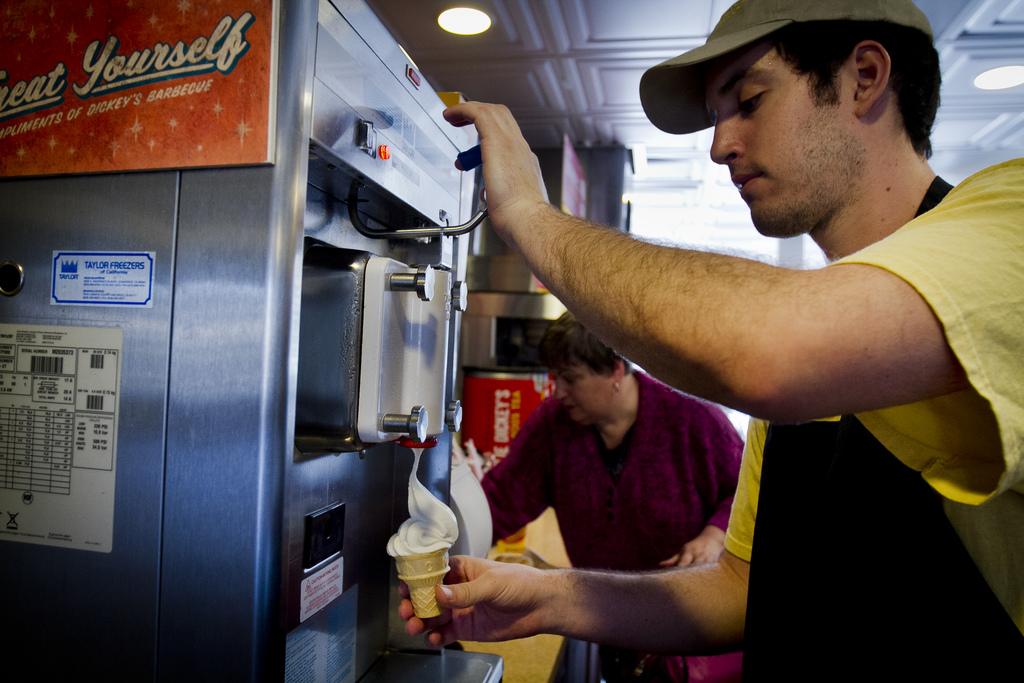 An employee serves ice cream on his work shift at Dickey's BBQ in Northridge. File Photo / The Sundial

A new labor law now allows California employees to accrue and use paid sick days that students are entitled to.

Paid sick leave, known as AB 1522, allows a part-time or temporary California employee paid leave as long as the person has worked on or after Jan. 1 for at least 30 days within the year, and must satisfy a 90-day employment period, according to the Department of Industrial Relations website.

The employee cannot begin to accrue paid leave until July 1 when employees begin to earn one hour of paid leave for every 30 hours worked, according to the DIR. For example, a full-time employee can earn up to eight days each year.

However, the DIR states that employers have the right to limit the amount of paid sick leave to 24 hours, or three days. The employer can also establish a cap policy for any unused time that is carried over to the next year.

Robert Villalovos, counsel for the labor commissioner’s office, confirmed a student employee’s entitlement to AB 1522. He stated that it applies to both Cal State and other student employees on college campuses.

“Cal State and UC fall under the definition of a ‘state agency’,” Villalovos wrote via email. “So these public educational systems are subject to the requirement to provide paid sick leave to a student who is in an employment relationship with the school.”

Edwin Martinez, civil engineering major and first year transfer student, is working his first on-campus job. Martinez says he would find the paid time off suitable for students because there are days when some may need to dedicate their energy on something other than work.

Although the law does not refer to verbal communication between employer and employee, an employee may still file a claim with the DLSE if there is failure to communicate, according to Villalovos.

“The employer is most at risk for not communicating the terms of its policy under PSL as a failure to communicate,” wrote Villalovos.

Jose Luna, a senior and part-time employee works off campus and learned about PSL from the announcement bulletin at work.

“I work for a major retailer, that I’d rather not name,” said Luna. “But yes, we do have a bulletin board where they post all the legal information and announcements going on within the company and store.”

While PSL is a law that requires employers to follow, they have options for implementing it. “An employer’s paid sick leave policy must clearly inform employees of the terms which must satisfy the minimum requirements provided in the PSL law,” wrote Villalovos.

Martinez admitted he hasn’t read the physical poster but plans on looking for it on the bulletin board with announcements to employees and inquiring about AB 1522 to management.

If a student or any employee is denied paid sick leave, he or she can file a complaint with the labor commissioner’s office. “However, due to the special constitutional status of the UC, student employees may be required to exhaust internal complaint procedures,” wrote Villalovos.

“This new law would definitely benefit anyone who puts in hard work at any job,” said Luna. “We may not get those 40 plus hours, but sometimes we do get pretty close. But being part time employees, we miss out on the benefits.”

Villalovos added that the employer is required to inform employees about how paid sick leave will be implemented at their place of work.

“If I have met the requirements I’m going to ask if I’m able to take that [time] off and see what they say,” said Martinez.

Neither the DIR or the labor commissioner’s office would comment on whether there has been any opposition against AB 1522 or efforts to exclude part-time and temporary employees.

Luna believes this is a beneficial change.

“As a student who isn’t able to put in 40 hours at work every week, living on a tight budget, we no longer have to sit there contemplating whether we stay home, rest and try to recuperate or go to work because we can’t miss out on a day of pay,” Luna said.