Men’s Soccer: Despite several opportunities, Matadors come away with 0-0 draw against CSUB 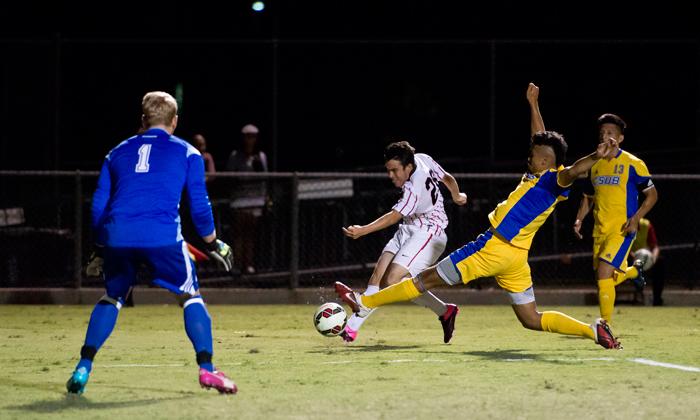 David Turcio dribbles the ball between two Roadrunner defenders and shots in the 0-0 tie at Matador Soccer field on Sunday, Sept. 13. David Hawkins/ The Sundial

The Matadors took the field on Sunday seeking to end their current three-game losing streak against the University of Bakersfield Roadrunners, but the game turned out to be a defensive battle that resulted in 0-0 tie.

From the beginning of the game both defenses set the tone early as they struggled to offensively establish themselves with neither team getting a shot off in the first couple of minutes.

The Roadrunners didn’t get their first shot attempt until the six minute mark, while the Matadors got theirs at the 25th minute when CSUN sophomore midfielder Stevie Manios shot was blocked as Roadrunners’ junior goalkeeper Nicholas Clever stretched out and blocked it with his right hand.

After giving up a shot attempt early in the game, the Matadors would not allow the Roadrunners to get another shot off for the rest of the first half as they constantly maintained possession by moving the ball around the field.

“Our team defense was off the charts. We held them to low percentage shots,” said CSUN senior goalkeeper Adam Hobbs. “The effort defensively as a whole was outstanding, they made it extremely easy for me.”

For the game the Matadors only allowed a total of six shots to the Roadrunners, with two of those being on goal.

“Even if we made a mistake we would track back 20-30 yards, make the tackle and make it easy defensively,” said Hobbs.

For the game Hobbs had two saves and now only needs three more to move into eighth-most in the program history.

The defensive tone resulted with both teams getting frustrated and getting physical with each other and had the Matadors being called for 21 fouls while the Roadrunners for 17. The Matadors were given three yellow cards, two of those came from questionable tackles from sophomore forward Papi Diouf and sophomore midfielder Stevie Manios. The other card was given to junior midfielder Juan Samayoa. Four of the Roadrunners players were given yellow cards.

Unlike the Roadrunners, the Matadors were able to attempt more shots as they took a total of 14 and seven of those being on goal.

The Matadors had a couple of chances to score in the first half, after Manios’ near make, CSUN junior defender Patrick Hickman missed over the crossbar after the team was rewarded a free kick outside the box at the 40th minute.

Starting the second half, the Matadors continued their good defensive play but also came out aggressive on the offensive side.

It would take less than a minute for the Matadors to take a shot, as CSUN junior midfielder Shane Steffes shot attempt from senior midfielder Victor Vasquez cross was blocked.

However, at the 55th minute it seemed the Matadors were able to capitalize off a turnover by the Roadrunners when CSUN sophomore defender Kevin Martinez’s goal was waived off for being offsides.

The momentum continued to be on the Matadors side but they were unable to capitalize on their shots.

Both teams looked to regroup and earn a victory in extra time as they would go on to play two ten-minute periods.

“We felt good, legs were a little heavy but we had momentum,” said CSUN senior midfielder David Turcios.

The Matadors continued to be the aggressors in extra time as junior defender Patrick Hickman almost had the game winning goal when his scissor kick inside the box was blocked. Less than a minute later, the Matadors senior defender Trevor Morley’s shot hit the right post.

While the Roadrunners would not be a threat in extra time, the Matadors ended it was for naught as the Matadors couldn’t capitalize on their five corner kicks, as opposed to the CSUB’s zero corners.

“Last couple of games we’ve given up one goal and it’s a PK in overtime, you can’t ask for more,” said CSUN head coach Terry Davila. “You know you have a team if you play great defense, we just got to build on the offense.”

The Matadors will get another chance to capitalize on their offensive opportunities and earn their first win in four games when they visit the Saint Mary’s College of California Gaels Friday at 4 p.m.