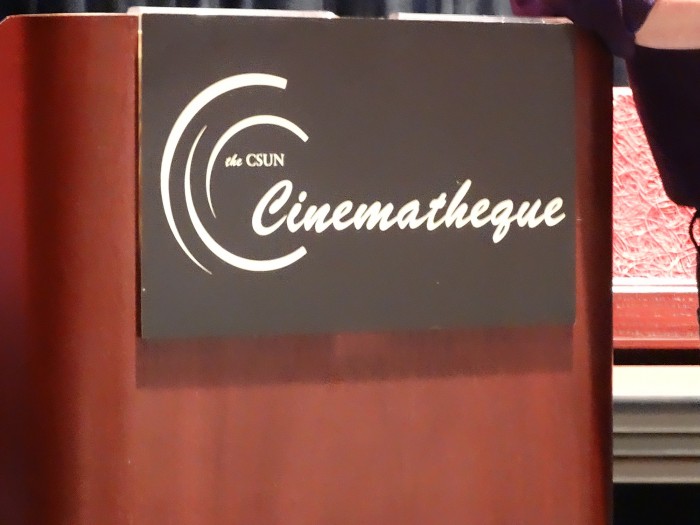 Depending on who you ask on campus, Thursday nights might stand for a night of partying, a celebration of the three-day weekend to come, or an evening spent at The Freudian Sip cramming for an exam.

For others, Thursday nights on campus are reserved for CSUN’s Cinematheque, a semester-long program of film screenings held by the Cinema and Television Arts department in Manzanita’s own Armer Theatre.

Curated by film studies professor Tim Halloran, the Thursday night Cinematheque program has offered both international and American films over the past 8 years, showcasing the works of many different and influential directors. Cinematheque invites CSUN students and any members of the Los Angeles community to view a wide array of classic films shown on the big screen in the Armer Theatre.

Halloran said that the impetus of the Thursday night screenings came out of a conversation he had with his students regarding director John Luc Godard during a critique of a film project.

“A couple of my students looked to me and said ‘Who is John Luc Godard?’, ” said Halloran. “I was stunned with the gap in what we were providing our students with.”

According to Halloran, each semester of the Cinematheque has featured the works of a different director, ranging from Godard to Truffaut to Kurosawa.

For the Fall 2015 showcase, Halloran chose to feature Orson Welles, the first American filmmaker to be featured in the program.

“I wanted to feature an American director and Welles is the first one I’ve done,” said Halloran. “It’s also in conjunction with the centenary of Welles’ death 30 years ago. A lot of cinematheques and film institutions are doing Welles now.”

Considering Welles had 12 complete films, it gave Halloran some wiggle room in filling out the entirety of the semester. Halloran plans to show some of Welles’ television works after the 12 feature films have been screened, and hopes to end the semester with the special screening related to the lost classic “The Other Side of the Wind.”

The first of the screenings showed Welles’ masterpiece “Citizen Kane,” a screening that had such an outstanding attendance rate that the CTVA department had to turn away nearly 50 people after the seats in the Armer Theatre had filled.

The most recent screening in The Armer Theatre showcased Welles’ second film, “The Magnificent Ambersons.” Acclaimed by critics and fans alike, the film is highly regarded as one of Welles’ best pieces, garnering several Academy Award Nominations in 1943.

The turnout for “The Magnificent Ambersons” seemed nearly as packed as Citizen Kane, with a crowd infiltrating the first floor of Manzanita Hall. CSUN students as well as Thursday night regulars lined up in anticipation of securing a seat in Armer Theatre.

“Thursdays at the Armer equal a transformative experience,” said Patsy Powell, CTVA major. “We are so lucky to have a room that facilitates screenings.”

Professor Halloran introduced the night’s feature, giving a brief history of the Ambersons and setting up a short introductory documentary piece on another Welles film, “It’s All True,” documenting the plight of filming “The Magnificent Ambersons” at the same time as Welles was filming a piece in South America.

When “The Magnificent Ambersons” took to screen, the audience found it to be an absolute joy. Old and younger audience members alike were laughing at the punchy and provocative dialogue written by Welles, as were they immersed by the engaging and thought-provoking narrative presented before them. All eyes seemed to be glued to the screen, taking in the poetic cinematography.

“It was like experiencing the movie all over again,” said San Fernando resident Linda Kelly. “What a remarkable film on the big screen.”

After the screening, many of the viewers stayed in their seats, either bowled over by the experience or discussing it intently with their neighbor. Halloran looked on, a successful second week accomplished.

“This whole program is about the experience of coming out to the theater and enjoying the films,” said Halloran. “It’s not meant to be another class or a lecture. It’s meant to be an atmospheric experience you couldn’t otherwise get at home.”