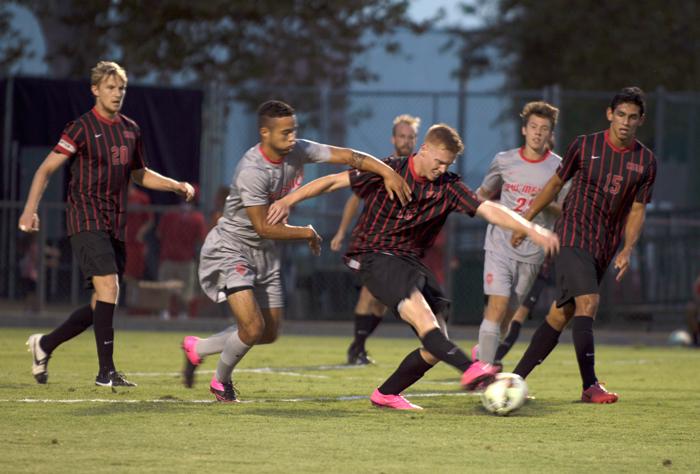 After a winless weekend, the Matadors look to get their first win in almost three weeks against the Gaels. Photo credit: Christopher Linares

On Friday the Matadors (1-3-1) will visit Saint Mary’s College when they try to earn their first victory in four games against the Gaels (3-3) in their first of three road games.

Currently winless in their last four games with three losses and a draw, the Matadors will seek their first road win of the season against a Gaels team that is currently undefeated at home and has won three of their previous four games.

The Matadors will look to continue their stellar defensive play of late, as they take on a team that has scored a goal in all their games and has a total of eight in six games.

Led by CSUN senior goalkeeper Adam Hobbs, the Matadors have only given up one goal in their previous two games. (Against University of New Mexico in extra time)

Hobbs has 14 saves for the season with a 63% save rate and only needs three more saves to move in eighth-most in program history.

However, Gaels senior goalkeeper Lucas Champenois has a save rate of 76% with 16 total saves.

Unable to capitalize on offensive opportunities in previous games, CSUN will look to continue to be the aggressors and end their scoring drought led by CSUN redshirt senior midfielder Steven Manios.

Manios currently leads the team in goals with two and five points. The rest of the team will have to contribute, as sophomore forward Dean Wright and junior defender Pol Schonhofer Bartra are the only two other Matadors to score a goal.

Not only will CSUN’s defense have to focus on SMC freshman midfielder Stephen Dougherty, who has a team-high two goals for the Gaels, but will also have to be careful of their multiple threats as they have six other players who have scored a goal.

For all the scoring that the Gaels have done so far, the Matadors should be able to take advantage offensively as Saint Mary’s has allowed eight goals for the season.

The Matadors should have their chances on the offensive side as SMC has given up 38 corner kicks to their opponents.

If CSUN can continue with their level of defensive play, this should be their offensive breakout game.

On offense, CSUN has taken a total of 45 shots in which 21 of those are on goal, giving them a shot on goal percentage of 46%.

Although they have a tough match-up, the Matadors should be able to get their first win on the road and snap their losing streak as the Gaels’ have demonstrated to be offensive minded first.

If the Matadors can stop the Gaels’ attack, they should be able to counter and take advantage of the opportunities SMC gives their opponents offensively.

The Matadors will look to get back on the winning side when they play this Friday at 4 p.m. at Saint Mary’s College.