Is the end of the Apple era peaking over the horizon? 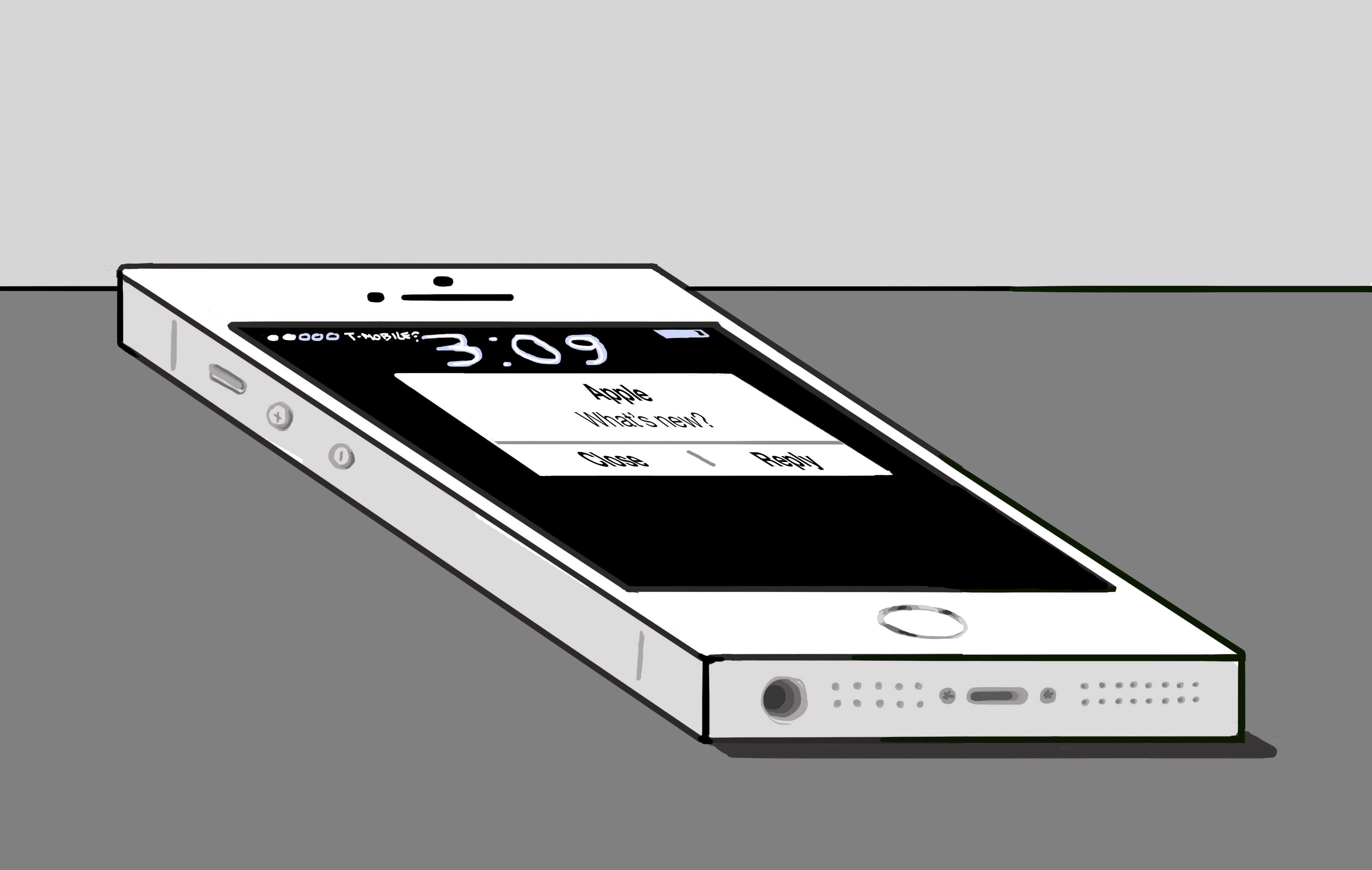 Illustration by Julienne Shih / Illustrator Image shows a drawing of an Iphone with a message that reads, "What's New?"

Steve Jobs and Steve Wozniak helped set the standard on what a personal computer should be. Modern tech companies owe a lot to Apple. The Apple 1 is far from what the most basic modern computer looks like but it is nonetheless a wondrous piece of technology.

The creative genius of Apple seemed to have no end. With tech companies scrambling over themselves to copy this technology, it seemed this genius and his unending ambition would continue for decades to come. While consumers eagerly waited for the new apple unveiling, all of this ended with the passing of Jobs.

His legacy would not be maintained under the new leadership. Jobs was against Small Tablets, Big Phones, Stylus’s and unrealistic designs in the phone iOS. When the new CEO took over, Apple introduced the iPad Mini, the iPencil, the iPhone Plus, and with iOS 7, the software had a radical change from Job’s ideals.

The modern Apple company is no longer what Jobs envisioned it to be, it has chosen to abandon its outside push that Jobs had. Rather than venture in the search for reinvention and invigoration it has created a flock of loyal followers. Rather than research new technologies, it has chosen to recycle old technology and re-launch it with a few touch-ups.

While it does not gain a lot of followers due to its high costs and it’s lack of change, it does retain its string of followers that will readily buy the newly released devices no matter the cost.

In continuation, it seems that rather than trying to keep Jobs legacy and keep the company going in the direction he wished, they went against his core beliefs of where the company should go. To add insult to injury they fired Scott Forstall, an executive of Apple that was behind the iOS software and he and his team were responsible for getting that early iPhone fan-base.

This was interesting because many speculated that he would indeed take over if the current CEO, Tim Cook, decided to step down.

Apple spurred IBM’s own venture into personal computers and with its partnership with Gates, a grand new market was launched, with the competitors pushing each other to their fullest potential. At this time, much like in our politics, the computing sector is dominated by a bipartisan rivalry: the decades long battle of Windows versus Apple.

At one point Apple took incentive and effectively launched the smartphone industry, popularized the use of laptops, and launched the tablet wars. Like all good things, time soon caught up with Apple.

The new flagship of phones and devices being released by tech companies promise the same features as Apple devices nowadays, but at less than half the cost. So why do people still purchase Apple devices?

In a sense, Apple devices have become more of a tradition and a status symbol than anything practical. The iPad Pro that is being released as a reinvented tablet seems to be a mock-up of the Windows Surface, except while the Surface boasts the reinvented Windows 10 operating system as well as tablet mode that instantly turns the device into a tablet, the iPad Pro only offers the not so great iOS Mobile operating system.

It’s new Smart Keyboard seems to be an exact replica of the Windows Surface keyboard. This development is ironic since Windows was originally the one that tried to mimic apple technology.

It is hard to imagine Apple ever falling behind, especially if you take a look around CSUN’s classrooms. In most cases, around three out of five devices are either iPhones, iPads or Macbooks. I believe that Apple’s dynasty will soon come crumbling down if it doesn’t change its attitudes (and prices). So, what do you think as you likely read this on an Apple device?