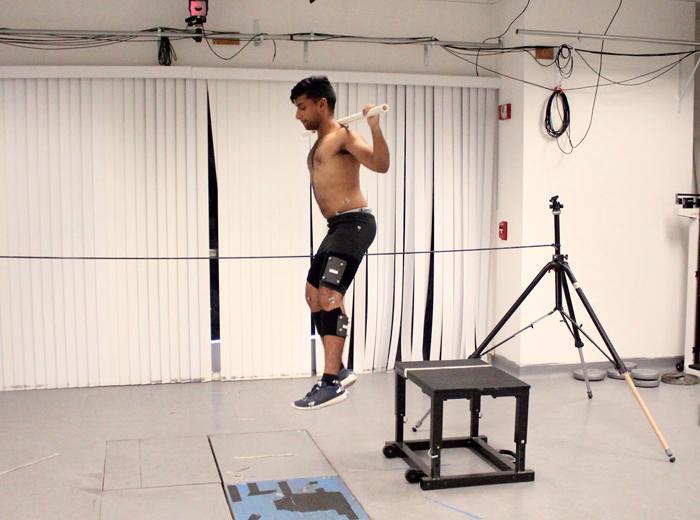 Inside of CSUN’s biomechanics lab, CSUN sports science and biokinesiology professor, Dr. Sean Flanagan, watches over his students as they utilize the Cortex Motion Analysis program to visualize a subject’s movement.

“What technology has allowed us to basically do in the lab is go in, study and determine why are those injuries are occurring,” Flanagan said.

More specifically, motion analysis programs have allowed trainers and doctors to analyze every part of how athletes move by putting markers on subjects, who then make movements around several cameras that cover each side of the room.

The subject and movements are then captured and digitized on computers through three-dimensional avatars, where doctors and athletic trainers can analyze the force and direction of the subject.

This is useful in athletics because it allows training staffs to see physical habits and patterns that an athlete may have.

“And technology allows us to potentially screen athletes and those who have these at-risk movement patterns,” Flanagan said. “We can then turn around and work on an intervention to change those mechanics, so that they are moving safer.”

More specifically, Flanagan said the technology has force sensors that let’s trainers and doctors determine what forces the body is enduring and compare. This allows them to compare it to unsafe moving patterns based on the forces, torques and pressure that certain parts of the body endure.

Outside of preventive measures, the technology allows training and medical staffs to track the progress of injury rehabilitation, in spite of the fact that it may be more time consuming.

“Attempts to bring people back more quickly, can potentially lead to bigger problems, re-injury or injury to another body part as they compensate because they haven’t completely healed from that particular injury,” Flanagan said. “I think in terms of some of those serious injuries that somebody is rehabilitating from, it is worth the extra time and expense to actually do a full three-dimensional analysis on them to make sure they are moving correctly.”

That sentiment is not only felt amongst doctors and trainers, but also athletes as well.

Pol Schonhofer Bartra, a junior defender on the CSUN men’s soccer team, was diagnosed with a broken foot, has championed technology during the rehabilitation and treatment of his injury.

“We design a program surrounding their actual disability, their actual problem that we found through this program,” said Claire Coudray, a senior athletic major who works with the men’s soccer team. “And that includes increasing their strength, the activation of their muscles, proprioception, which means knowing where their body is in space.”

In addition to the visualization of movements and pressure, motion analysis technology allows athletic and medical staffs to finally have solid, concrete evidence.

“The best thing about technology is it’s going to allow us to quantify things that we [used to] just have subjective data on,” Flanagan said.

Not only does it provide statistical figures, but the accuracy in which the program gives these numbers, allows people in the field to experiment with other things.

And in a field where the fates of athletes can dramatically turn on slight miscalculations, students understand that precision and credibility are key.

Granted, advancements in athletic technology have been a source of optimism and accessibility for trainers and doctors, they must be able to contextualize the injuries and utilize the data properly.

“You have to look not only at fixing the site of the injury, but also the potential source,” Flanagan said. “I think a lot of people just stop at the site, and never look examining the source and fixing the problem that caused it.”

Even though technology has changed the medical and athletic landscape, the oldest form of healing still reigns supreme.

“One of the things that we have to understand, regardless of what technology we use, the body still needs time to heal,” Flanagan said.