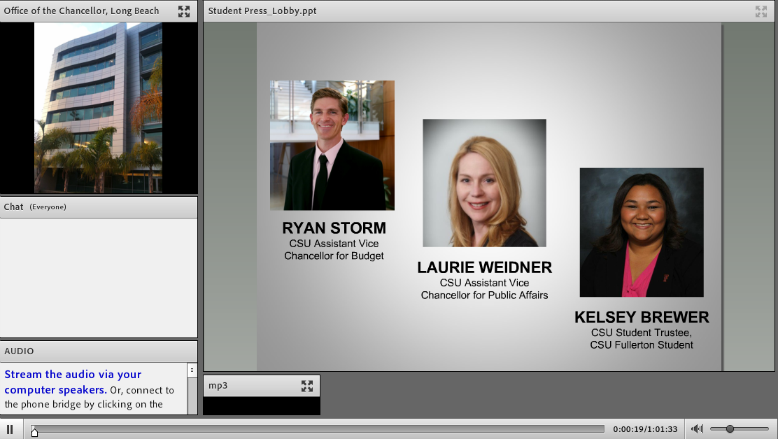 The student media conference will be archived on the CSU YouTube channel. Credit: Breana Harris.

Storm serves as the CSU assistant vice chancellor for budget, and he discussed the current budget for the 23 CSU campuses across the state, as well as plans for the 2016-2017 budget.

He noted that state funds for the CSU were cut by $1 billion during the Great Recession, but the system is now 80 percent recovered, thanks in large part to Governor Brown’s plan to fund higher education, which was originally implemented in 2013.

Hannah Jacobsen of CSU Los Angeles, inquired as to the specificity of the governor’s plan, and as to whether he would continue to fund higher education.

Storm said the governor has allowed CSU to prioritize when it comes towhere the funds are allocated. “I think, generally speaking, the governor has been very mindful that the board has the responsibility to really make those tough, critical planning decisions.”

He also stated that he was confident the governor intends to continue his plan to fund CSU universities through at least 2019.

Weidner, who serves as the CSU assistant vice chancellor for public affairs, spoke about the ongoing negotiation process with the California Faculty Association. The next meeting between the organizations takes place Oct. 8.

The CSU claims that the CFA proposal would cost $108.9 million, which is the equivalent of the enrollment costs of 16,800 students.

Miranda Hutchinson of Humboldt State University brought up the discrepancy between presidential salaries and the salaries of professors. She claimed that Humboldt State President, Lisa A. Rossbacher makes $303,827 annually.

Weidner argued that the role of a university president may be considered more significant than the role of a single professor. “Our presidents are the CEOs of our campuses, and they’re overseeing operations equivalent to the size of small cities. They oversee health centers, police departments and full academic buildings, and they’re responsible for the fiscal solvency of their campuses.”

Lastly, Brewer, who is a CSU Fullerton political science major as well as CSU student trustee, spoke about the January 28, 2015 implementation of the Student Involvement and Representation Fee. The $2 SIRF fee, which is considered an opt-out fee, helps fund the California State Student Association.

Brewer stressed the importance of this funding in that it allows the CSSA to become independent of the CSU Chancellor’s Office. When the CSSA is not relying on the state for funding, it has more freedom to take a stance opposing the CSU, which allows for better student representation.