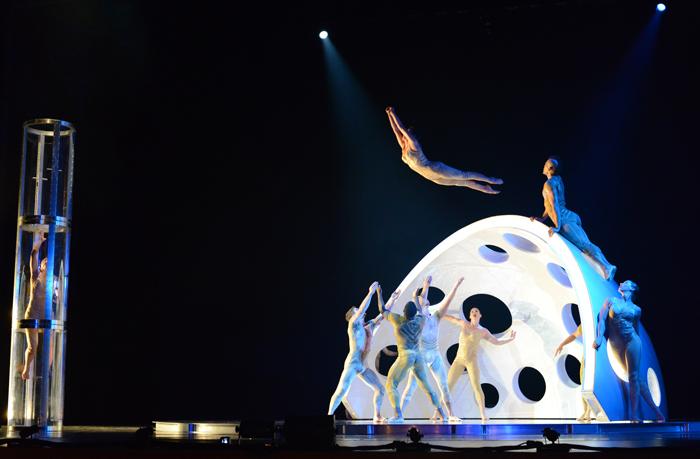 Performers fly across the stage at the VPAC's showing of DIAVOLO, showing off some team work stunts. ( Alejandro Aranda / The Sundial)

The Valley Performing Arts Center welcomes their first event of the 2015-2016 season with architecture in motion, Diavolo.

This year the VPAC’s calendar if full of innovative programming and entertainment aimed too appeal to CSUN’s 40,000 students plus the larger community of the Valley.

Yet, Saturday night was no exception. VPAC was successful at filling up the house with many valley residents and students of all age groups to watch Diavolo perform live accompanied by the-60 piece New Symphony orchestra led by Christopher Rountree.

“What I liked the most is that there isn’t anything like this out there,” said Theda Reichman. “The idea that it’s a signature piece that one one has, makes it that much more appealing to me.”

Diavolo is unlike anything you’ve ever seen before. It is a unique mixture of different movement vocabularies such as everyday movement mixed with ballet, martial arts, gymnastics, acrobatics and even hip hop movements. There is not type of narrative involved in any of that performances, therefore it is up to the audience to determine what is the theme as it portrays human struggle, fear, danger, chaos, faith and love.

Saturday night was a mixture of three unique and distinct 20-to-30-minute performances one after another.

The first performance called “Foreign Bodies” involved a figure of an “800-pound, 7-by-12 foot aluminum cube” all designed and carefully engineered so that it can be moved around as they performers push and across the stage.

The first few minutes of the shows the performance you were able to see how the cube was present however, afterwards the cube turned into a pyramid shape all dispersing into three different shapes.

“I couldn’t tell what it turned into,” said Theda Reichman. “It looked like a volcano to me, the red dim lights gave it that persona.”

Whatever shape it might or might have not been, it definitely kept the audience wondering and focused on their movements.

It was transformed into many different geometric forms while all the performers are trying to somehow figure out their identity through it.

Although the cubical was the only thing on stage, the white screen background accompanied with the different lighting gave it a 3-D figure like screening. It drew your attention from one ,over the to another.

The performers changed gears as part two of the show unfolded, titled “Fearful Symmetries.” This part of the show featured four aluminum and wood columns and two U-shaped pieces that are deconstructed to be rearranged by the dancers. The stage would rise towards the audience at a certain angle for the dancers to slide and jump from and it would descend depending on the music.

“It looks like they are building little cities,” said audience member Karina Alcala.

The cube shown in part one has now transformed into multiple number of components. They somehow illuminate the language of mathematics and how the performers really deconstructed and reconstructed the towers to really find what they are all looking for.

The performance reflected an urban type of area almost a reenactment of Charlie Chaplin. The music was very fast passed, giving it a very loud base beat to pick up the pace of the dancers.

“It’s so different,” said Saxon Coté. “It gives it like dark feeling than what other pieces or composers would portray. It’s just amazing how they never stop moving.”

Even when the orchestra’s symphonies were slow, their body notions kept moving to the best.

However, the most awaited performance by a number of audience members was the finale, “Fluid Infinities.”

Part three of the show was an enormous structure in a resemblance of a shifting brain, a honeycomb look-alike shape, even a moon like reflection. You would really have to put your imagination into it to understand it.

The performers finalized the show by somehow struggling to find their way in and out of the piece.

A current North Hollywood teacher, “Mark Hilt, who was watch the show said he loves coming to these type of shows, “I am very familiar with the music and liked the show equally as much. There isn’t anything I didn’t like, the lighting was just amazing.”