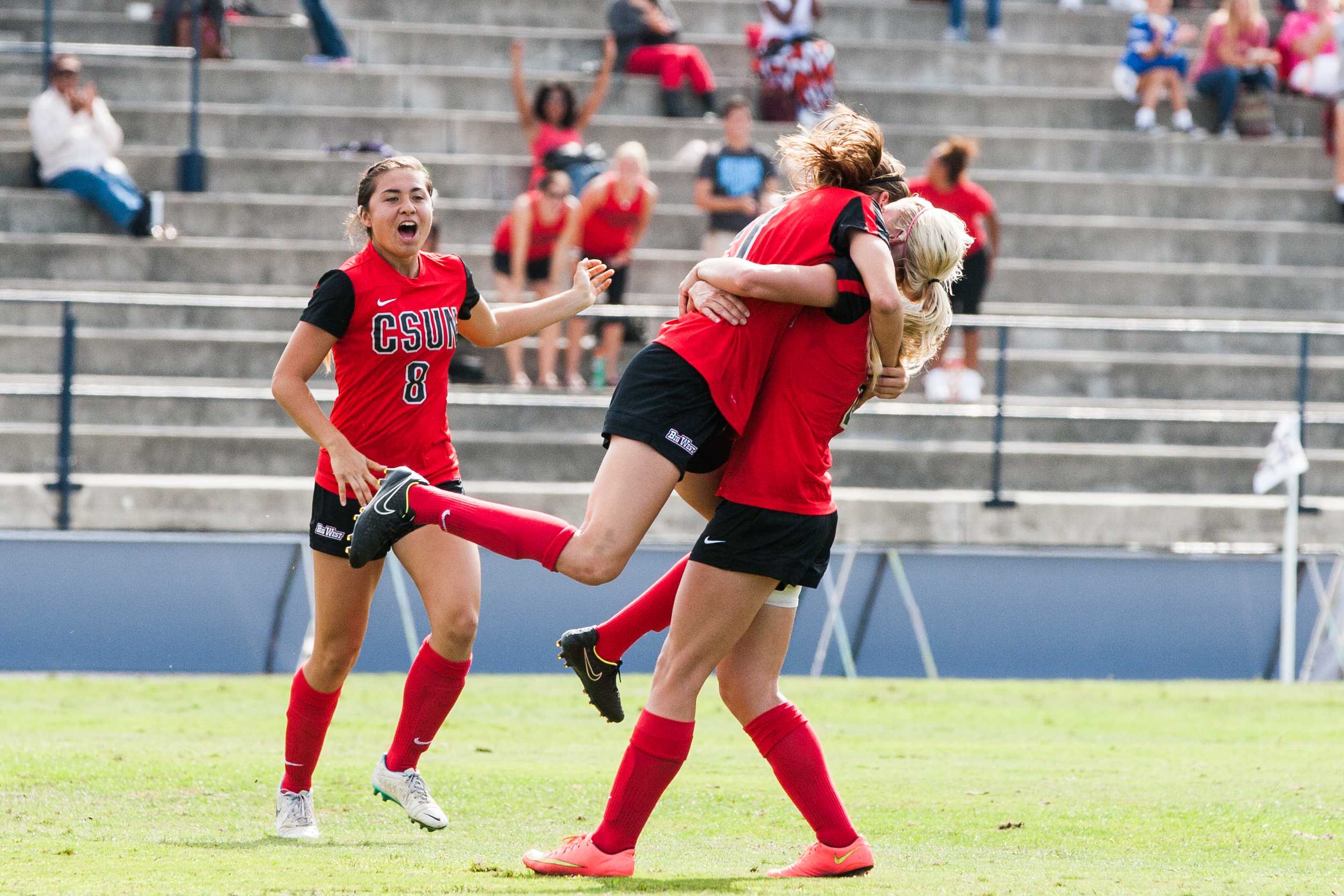 The Matadors were able to bounce back after a loss in their previous game, due in large part to sophomore forward Cynthia Sanchez's late goals. Photo credit: File Photo/The Sundial

After trailing by two goals for the second consecutive game, the California State University, Northridge women’s soccer team railed back for a thrilling 4-3 win over San Jose State University.

The Matadors picked up another road win and improved to 7-3.

San Jose State would strike first at the 12th minute mark off a goal from sophomore forward, Dorthe Hoppius. She would score another goal off a header at the 23rd minute mark that put the Matadors in 2-0 hole.

The Matadors had multiple opportunities to score in the first half, but were unable to connect. Sophomore forward, Cynthia Sanchez came out aggressive, taking all three of CSUN’s shots in the first 20 minutes of play, but could not find the back of the net.

Sanchez, who has led the team in goals scored this season, had gone without a goal since the Matadors victory over Detroit back on Sept. 6.

Much of CSUN’s inability to register goals came from the strong defense by San Jose’s freshman goalkeeper, Paige Simoneau who recorded three saves in the first half.

The Matadors entered the second half in the same position as they were in their Friday night loss to Santa Clara. This time, they were able to respond.

They came out aggressive after halftime with Sanchez and junior midfielder, Camille Watson both posting shots within the first few minutes.

The Matadors first breakthrough came at the 53rd minute mark off a goal from sophomore midfielder, Ariana Tran, her second of the season. The goal was assisted by Sanchez.

After a San Jose foul, the Matadors found themselves with an opportunity to even up the score at the 59th minute mark. Senior defender, Kendall Moskal converted the penalty kick, her second goal of the season.

It would not take long for San Jose to answer back however. Hoppius would kick in her third goal of both the game and the season just a few minutes after and San Jose looked poised to end CSUN’s momentum.

The Matadors however, would turn to Sanchez who answered the call. After scoring at least one goal per game during the team’s early five game winning streak, she had been without a goal for the past three games.

She would tie up the game at three goals apiece at the 76th minute mark off an assist from sophomore midfielder, Destinney Duron.

Then, with the game in the balance, she would put the Matadors ahead, scoring her eighth goal of the season as the match approached the 80th minute. Her first shot was initially blocked, but she rebounded off the first effort and converted to give CSUN the lead for good.

The Matadors will wrap up their current road trip against the University of San Diego on Friday Sept. 25. Kickoff is at 5 p.m.