Bringing out your inner pirate 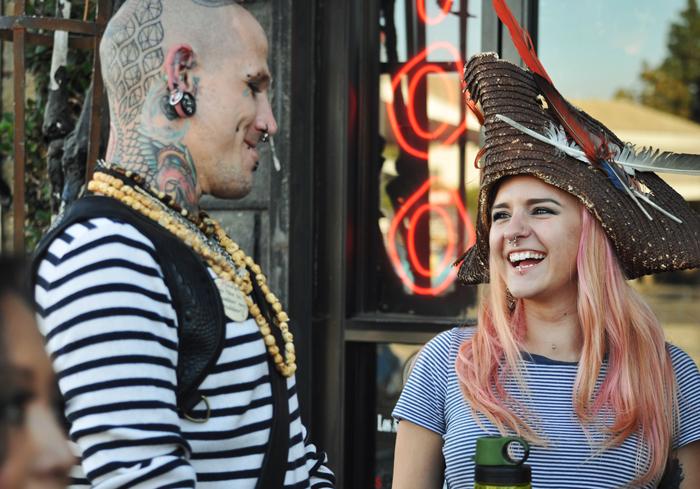 The story behind international Talk Like a Pirate Day has nothing to do with pirates at all, but instead a 1995 poorly played game of racquetball, unintentional pirate slang insults and a possibly torn hamstring.

This is not a holiday based on popularly known Jack Sparrow from Disney’s “Pirates of the Caribbean” or the iconic Captain Hook from “Peter Pan”.

International Talk Like a Pirate day has come and brings out everybody’s inner pirate. From the flashy jewels, to the colorful language and even the fashion-forward clothing, it’s a day where everybody is encouraged to show their true ‘piratude’.

“Piratude is the attitude of a pirate,” Summers said. “It’s the feeling of being totally free and doing what you want and just being who you are living your life for yourself…not for other peoples rules, not for other people’s expectations, except your mother, of course.”

Despite Hollywood’s negative portrayals of Pirates as unsavory thieves, the founders are putting an end to that stereotype by bringing good, innocent fun in the name of pirates everywhere.

“We are not hurting anybody we’re living our lives for ourselves,” Baur said.

Filled with entertainment, laughter and 50 dollar selected pirate tattoos, here are a few tips to get you ready for next year’s festivities.

Every Pirate must know the 5 A’s

Pirate language is rich and somewhat complicated, with so many words sounding similar yet completely different in meaning, pronunciation is key. During a brief lesson on pirate slang, Ol’ Chumbucket and Cap’n Slappy gave what was considered to be the beginner’s kit.

The 5 A’s are essential to every pirate’s language as these are the words universally known to all pirates.

“Avast”: Stop and give attention.

“Aye”: Means I. ‘Aye hardly agree with everything you say or do.’

“Arrggghhh”: The most flexible in the bunch.

“Arrgghh can mean anything that you want,” said the founding duo. “Our team is winning. Arrgghh. Our team is losing, arrggh.”

It’s no secret that Pirates love their rum. However, it’s very unlikely you would see Pirates drinking say vodka or Malibu. This year’s event was sponsored by TREASURE COAST SPIRITS code rum. As Crazy Boots Martin said, “[Every Pirate must have] plenty of rum, gotta keep the crew happy.”

Talk like a pirate day is meant to be good-hearted fun. It’s the only day of the year, besides Halloween, “where every man, woman and child on the planet is not just allowed to talk like a pirate but encouraged to let their inner pirate out and swagger,” said Ol’ Chumbucket.

Publicist, Marie Vargas, said “National Talk Like a Pirate day is all about creativity and becoming part of another world”.

For More Information on Talk Like A Pirate Day, visit http://www.talklikeapirate.com , for upcoming events, cool Facts and even a quite interesting Pirates advice tab.