Battling breast cancer in the lab 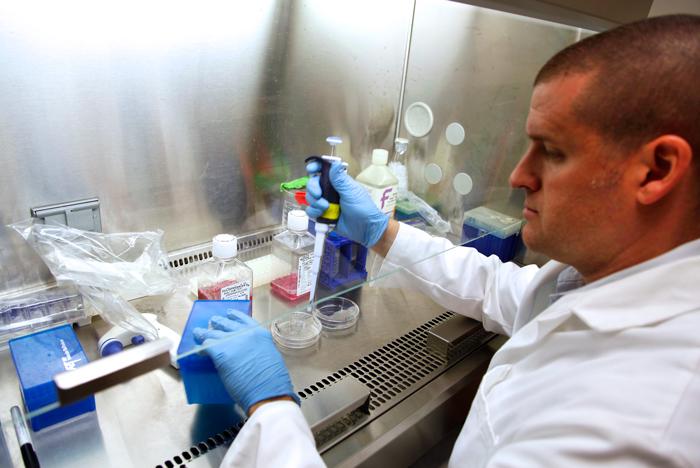 A CSUN biology professor and his students are closer to determining what exactly causes breast cancer to spread.

Professor Jonathan Kelber, Ph.D., and his team of five graduate and undergraduate students completed research on a gene called PEAK1.

PEAK1 is a gene that can allow transforming growth factor beta, otherwise known as TGF beta, to promote metastasis, or the spreading of cancer cells. Kelber said that everybody has both genes, but the question is under what circumstances are the genes turned on.

“What is unknown is that there’s a growth factor in TGF beta that can either be good or bad,” Kelber said. “You have some cancers where TGF beta prevents the spread and in other cancers TGF beta promotes the spread. So the question is ‘What causes TGF beta to turn and make that switch?'”

Malignant tumors, Kelber said, are able to spread to other tissue types, but cancer that starts in the breast and stays in the breast without spreading is called benign.

According to Kelber, TGF beta keeps cell growth and placement under control in most cases. In some forms of breast cancer, TGF beta induces metastasis, which transforms cells into malignant cells at an accelerated rate.

“What ends up leading to death in cancer is the spreading stage of the disease,” Kelber said. “If the cancer doesn’t metastasize, then patients have a really high probability of surviving. Once it metastasizes, the chances of surviving goes down significantly.”

Kelber said that the gene PEAK1 promotes that process of metastasis, and without PEAK1, the cancer won’t metastasize.

The lab, which also studies pancreatic cancer and tissue regeneration, studied breast cancer cells by putting cancer in a certain part of an animal and recording the results that showed the cells could metastasize. That model was used to test whether or not PEAK1 could regulate a switch in TGF beta.

Malachia Hoover is a second year graduate student with a bachelor’s degree in cell and molecular biology. She helped build and stock equipment for the lab and was one of the first students to join Kelber’s lab at CSUN.

“Dr. Kelber is a great mentor and has pushed me in many ways to become a great scientist,” she said.

Hoover’s research began working on novel biomarkers for pancreatic cancer, and then she helped her colleague in breast cancer research. Hoover now mentors undergraduate students, putting the methods she has learned into practice.

“I also worked on an independent project that explored methods of rapid extraction of RNA from cancer samples,” Hoover said. “As a grad student, my project involves tissue regeneration and stem cells.”

The research in the lab keeps Hoover busy.

“We spend at least 40 hours a week in the lab as grad students and are pushed to produce meaningful results rapidly,” she said. “The molecular techniques we conduct are very detailed and easy to mess up, so it also requires being very meticulous.”

The team’s findings were published in the Public Library of Science and is the first of Kelber’s 15 published peer-reviewed publications to come from his lab at CSUN.

“The work for a Ph.D. involves research – that’s all part of being an academic researcher,” Kelber said. “It’s very difficult being a Ph.D. without having your work published. [It’s] the way you’re evaluated by your peers and faculty members.”

Kelber studied this particular research for his Ph.D. and thinks it’s a disease that has a good chance of being figured out.

“There are still some challenges,” he said. “There’s a big push right now to get over that hump and say we can really treat and almost cure all cases of breast cancer.”

The students in the process, Kelber said, were instrumental.

Sa Kim, who also works in the lab, is a biology major and has completed four years of her five-year program at CSUN.

“Dr. Kelber has been an incredible mentor who spends much of his time helping us to understand our projects and advising us on our future directions,” Kim said. “He also helped many of us maximize our full potential as we juggled our personal, home and school life.”

Kim contributed to the project by characterizing cell lines under different treatments. She didn’t find the work very difficult and adds that the long lab hours are always worth the results.

“It does require a little more attention to detail than the other protocols,” she said. “Because arresting the cells at different cell cycle stages requires different treatments.”

Students who want to work in the lab need to apply, Kelber explained, and most students who contact him are interested in the lab’s current research.

“Since my undergraduate years, I think I kind of fancied the idea of being one at an institution where undergrad and grad students can be involved in the research,” Kelber said.

Kim plans on obtaining her degree in biology and applying for M.D or Ph.D. programs.

“In the future, I hope that I will be conducting research, most likely cancer related, at an academic medical center while allocating some of my time into clinical service,” she said.

Hoover’s goal is to obtain a Ph.D. in the biomedical field and eventually start her own lab, hoping to one day mentor and train aspiring scientists.

“Working in Dr. Kelber’s lab has opened my eyes to the world of research and has validated my goal of becoming a biomedical scientist,” Hoover said. “I had little to no experience in research, but since the years as a member of his lab. I have learned so many techniques and my knowledge for the subject has increased exponentially.”

Kelber is hopeful and optimistic about the possibilities of new scientific discoveries.

“To be close to a goal and to be able to see — not in my lifetime but maybe in my students’ lifetime seeing — that finish line approaching,” Kelber said. “It’s kind of encouraging.”