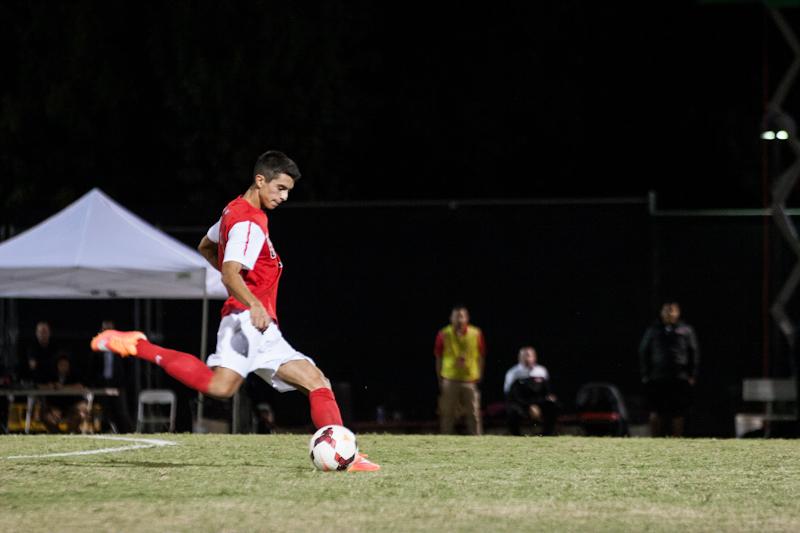 The Matadors will now go into conference play with a three-game winning streak after defeating the University of San Diego on Friday. Photo credit: File Photo/The Sundial

After losing three games in a row earlier this season, CSUN (4-3-1) is now on a three-game winning streak after defeating the University of San Diego Toreros (4-3-2) 1-0 on Friday night.

Coming off his first career hat trick a couple of games ago, CSUN senior forward Carlos Gonzalez continues to be an offensive threat for the Matadors has he would get the games only goal in the second half that sealed the win.

Like the previous two wins, the Matadors defense continued to be a big reason for their success, coming up with another clean sheet.

CSUN senior goalkeeper Adam Hobbs was able to withstand USD’s relentless attacks as they took 13 shots for the game with six of those on target and in the process earned his 12-career shutout.

Hobbs for the game had six saves (and now has 30 saves for the season), while USD’s sophomore goalkeeper Thomas Olsen had three.

Even though the Matadors had fewer offensive opportunities as they only took eight shots for the game with four being on goal.

For the fourth straight game, the Matadors responded with great defensive play, as the Toreros put offensively pressure the Matadors in the second half.

USD in the second half outshot the Matadors 8-5 but also had two corner kicks, while the Matadors only had one but it was the Matadors who would seize the opportunity.

In the 65th minute, Gonzalez would get his team leading fourth goal when he scored a header from a cross from the right wing from CSUN freshman defender Jumoke Hutton.

Hutton earned his first assist of the season on the play.

After losing their first two road games, the Matadors concluded their road trip by winning all three games.

Three of the four wins have now come on the road and the team will look to improve their home record and extend their wining streak.

The Matadors have a rare Sunday off before opening up conference play against the California Polytechnic State Mustangs (4-2-1) Thursday at 7 p.m.