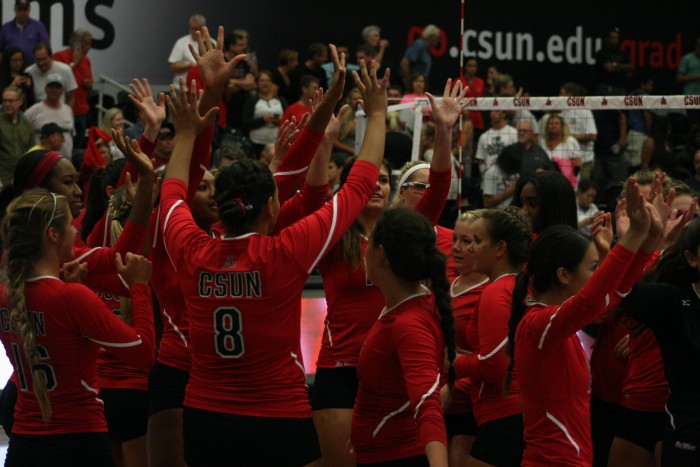 CSUN volleyball celebrates their 3-1 win against UC Davis at the Matadome on Sat., Sept. 28. (Leni Maiai / The Sundial)

A clean sweep in the conference opener

“Being in a positive environment like this, we love our student body to come out and support us, the DJ is awesome the atmosphere and the band, all those things are contributing factors to having the girls feel like they’re at home and we haven’t been at home for all season,” said head coach Jeff Stork.

The Matadors started off strong in the first set, taking the first point with a kill. The Matadors kept their momentum and soon built a 9-4 lead.

But the Anteaters slowly started to chip away, gaining ten more points before Stinson sent the final kill over the net, winning the set 25-18 for the Matadors.

“We just knew that coming into conference we got to start off clean and fresh; just had to start with a win and so we were pumped for that and just were on fire the whole match,” junior setter Maddie Leiphardt said.

Up one set to none, the Matadors took an early lead over the Anteaters in the second set. But by nine, UC Irvine had the score tied and the two volleyed for the lead until 12-12 when the Anteaters took a two point run, allowing them to take the lead for the first time in the match.

A kill from Stinson at 20-21 tied the set, putting the Matadors back in the running for the lead. With the Anteaters at set point, a missed serve tied the score. Back to back kills from Owens then won the set for the Matadors.

“In preseason we only had our parents and a few others, so I feel like the crowd really pumped us up and just playing at home was really good for us too,”said Owens.

Just as in the first two sets, the first point went to the Matadors, but unlike the first two, the Anteaters struck back right away keeping the score close until the Matadors were able to break away and win the set.

“Obviously we played well. Our hitting and our attacking was outstanding. CeCe was unbelievable tonight, she had no errors on I think it was on 20 swings 12 kills. I mean that’s off the charts great,” said Stork.

Stinson, who played an errorless game, had 17 kills and hit .654. Owens added another 13 kills (.435) with three digs. Leiphardt had 22 assists with one dig. Sophomore middle back Rachel Diaz provided two of the four service aces for the Matadors.

After just one win in preseason play, the Matadors looked to this match as a fresh start; as the start of an entirely new season.

“Our energy just this game compared to all the preseason games was so much better and we were just having so much fun, so we definitely want to repeat this because it was way more fun for us,” said freshman setter Erin Indermill.

The Matadors believe this first Big West match will set precedent for the rest of their season.

“I think since we won this game in three and we played so well, it’s just going to carry on the rest of the season,” said Owens.

With this win, it provides optimism and a way to get away from the Matadors’ poor non-conference play.

CSUN returns to the Matadome Saturday to take on the UC Davis Aggies at 7 p.m.

Despite the win, the team showed its youth in certain stretches.

“We can’t let that stuff happen, but with young teams sometimes it does,” said CSUN head coach Jeff Stork of early mistakes. I thought they responded in the fourth set of hanging in there and playing hard throughout and we were creating plays that we should be doing.”

For the first time in the Big West season, the Matadors started off the set by giving the first point to their opponent. But after a brief back and forth, CSUN was able to keep at least a two point lead on UC Davis until a final block from junior middle back Stephanie Serna Arreola won the set. 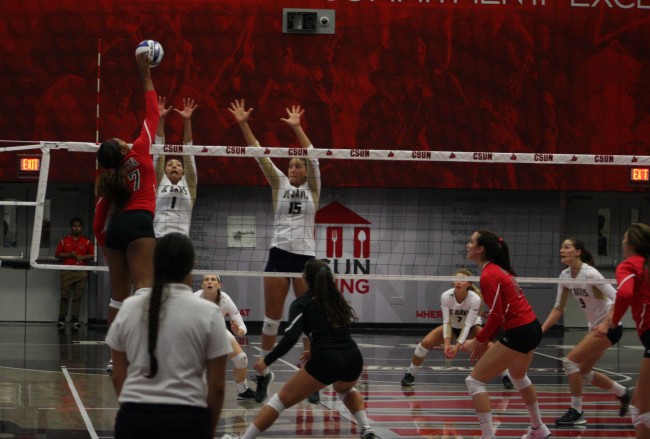 Set two started with CSUN on top, but the Aggies had the score tied from the get go. The two volleyed the lead back and forth each taking a turn with it. At 9-11, the Matadors had built a two point lead for the first time in the set, but soon lost it with an error and Aggie kill. At 15-13, the Aggies were again able to tie the score with back to back kills. UC Davis then took the lead by two and was able to maintain it. Not allowing it to grow by more than three, the Matadors fought back until 21-18, when a CSUN error pushed the Aggies’ lead to four. Two blocks from sophomore middle back Diaz and red shirt freshman opposite hitter Nada Dragovic and two kills from Stinson tied the score at 22. The Matadors then claimed set point four times before claiming victory against the Aggies.

Up two sets to none, the third set started with the Aggies on top. CSUN had the score tied by four and was quickly able to build a five point lead. The Matadors maintained this lead throughout the match, allowing UC Davis to come within three in the middle of the set but answered by building an eight point lead, 18-10. UC Davis shortened the lead to 20-18 with a kill and even tied the set at 23, before winning the set two points later.

After dropping the third set, the Matadors started the third set on top. UC Davis, however, quickly took the lead back from the Matadors and kept it until 9-10 when CSUN was able to tie it with a kill from Haake. The two volleyed for the lead, but by 17-14 the Matadors had pushed ahead. The Aggies had no intention of standing down, and had the score tied at 17. At 19-19 UC Davis took the lead and soon pushed three points ahead. Back to back kills from Stinson tied the score at 22 and then put the Matadors ahead by one. The Matadors then claimed set point several times before finally sealing victory with an Aggie hitting error.

“They just took momentum and we made sure to come back in the fourth set with so much more than they had and execute really well and I think we did that,” said Diaz.

Both Dragovic and freshman outside hitter Aeryn Owens added 14 kills for the Matadors. Dragovic (.310) also had 21 digs and four blocks.

Leading the Matadors was Stinson. With 22 kills on 52 swings, the senior reached a career high, surpassing 1,000 kills as a Matador.

“I’m proud of the girls. They did a very good job of hanging in there. Obviously we should have won the third set,” said Stork.

The Matadors take on UC Santa Barbara Gauchos on Friday in the first of their four-game road trip.