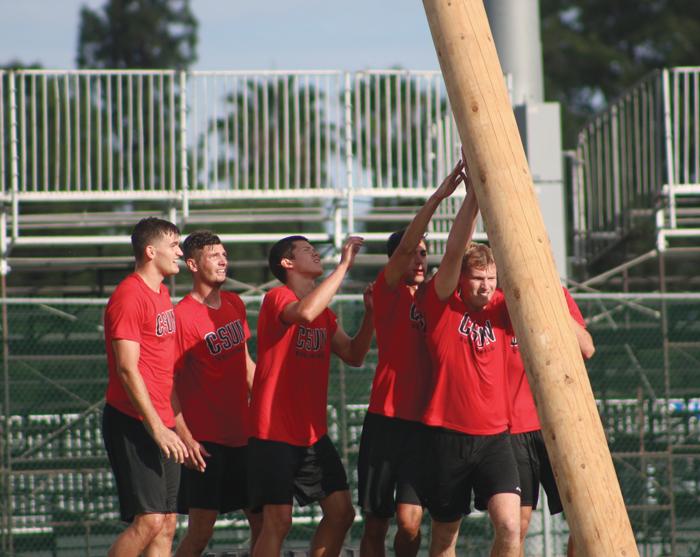 Redshirt freshman Jakob Karlsson is assisted by his teammates in flipping a 280-pound log. (Leni Maiai / The Sundial)

On a small island just off the coast of San Diego, William Hart tries to keep his mind off of his aching legs. Around him, some comrades have fallen to the ground, legs fractured and unable to continue.

It is Wednesday morning, half way through “hell week,” but Hart can feel the end closing in. With only two hours of sleep over the last three days, and having run nearly 200 miles, Hart is borderline delirious.

But he numbs himself to the pain. Anything to avoid working as a lifeguard, protecting people who can barely swim.

Hart wants to become a Navy SEAL, to protect the United States instead.

For the next 20 years, Hart would travel the world as a Navy SEAL. Today he brings that experience to the Acumen Performance Group.

“At APG we push for our clients to better learn how to continue to function at a high level while under immense stress,” said Juri Chabursky, CEO of APG. “All of the instructors are veteran Navy SEALs, so we try to push the fundamental values that were instilled in them during their experiences.”

The teams were made to carry 280 pound logs, flip tires and many more high-intensity workouts.

The sessions involved a two hour intensive training period, followed by an hour in the classroom. The teams were split into groups, with the group leaders alternating between exercises.

“They really pushed us all individually, some of the stuff was ridiculously hard,” said Justin Toth, a freshman volleyball player. “We all had to be accountable for our teammates and we were punished if we didn’t follow through with that. If someone isn’t pulling their weight when you’re doing log carries than 40 pounds turns into 60 pounds.”

Sophomore basketball player Tessa Boagni believes her team is far better for it.

“Everybody had a turn being a leader which I think made us all come together really well as a team,” she said. “It probably wasn’t as hard as some of coach [Jason] Flowers’ practices, but we got a lot out of it as a team.”

However, the source of the workouts was advantageous for the student-athletes.

“It was pretty inspiring learning from guys who are probably some of the toughest in the world,” Boagni said.

This is the second year that the three teams have been involved in the workouts, which can be vouched for by many Olympians and professional sports teams. Next month Acumen Performance Group will work alongside the Miami Heat.

The program has been particularly successful in uniting team members that weren’t on the same page, but according to Chabursky, that was not a problem with the Matadors.

He said he was very happy with the cultures that were already established in CSUN. He is confident that the training sessions have helped move the squads to an even better level.

“The SEALs were reiterating things that we tell our guys every single day,” said Theo Edwards, the men’s volleyball assistant coach.

“These guys have been on teams at a whole different level,” he said. “For us being a bad teammate could cost our team a game. For them it is truly life or death.”