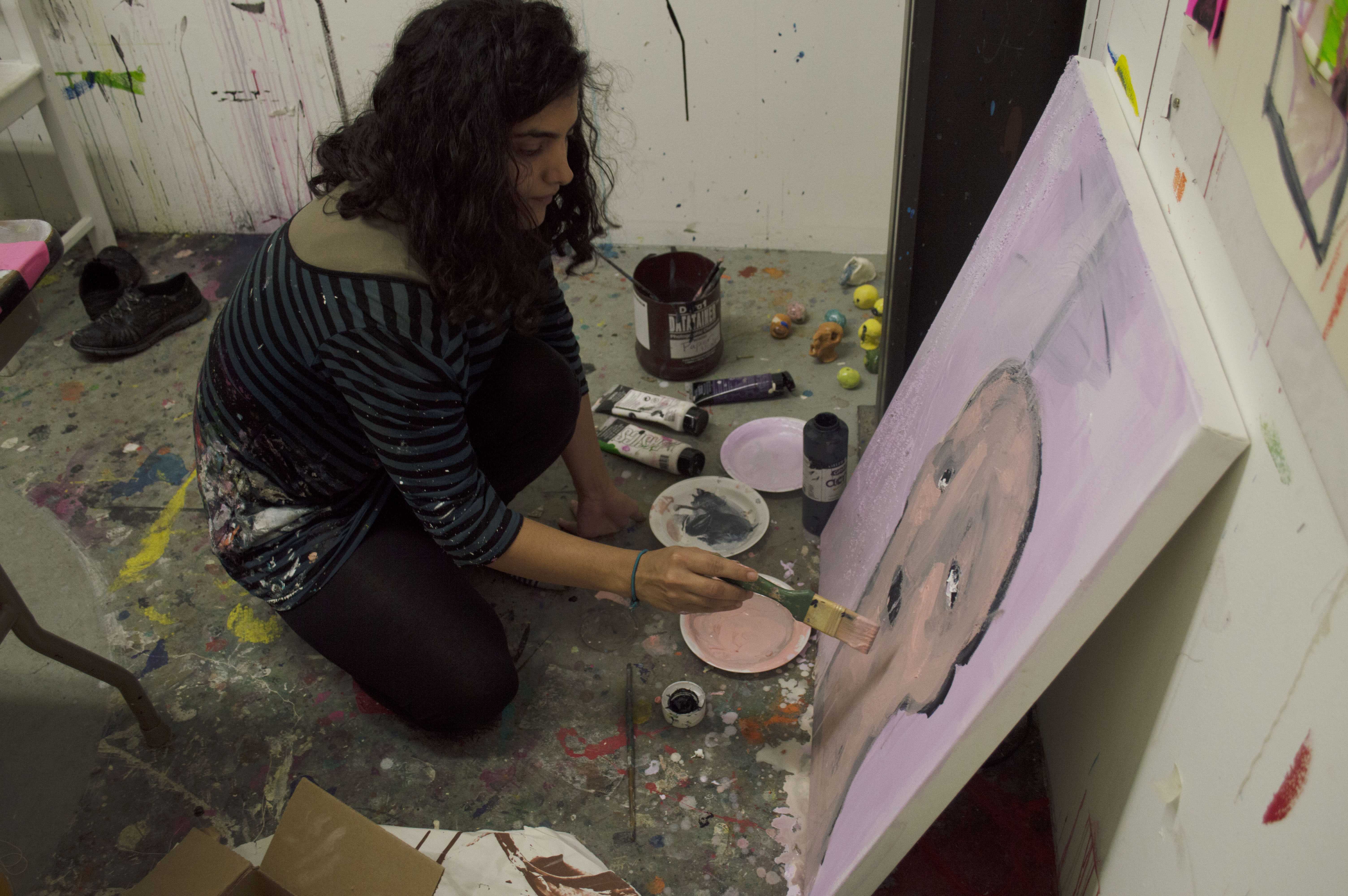 Mehrnoosh Eskandari is an art student attending CSUN from Iran who is heavily influenced by American and German artists. Photo credit: Michelle Moran

In the process of finishing up her master’s degree, along with an art piece for her collection, 31-year-old Mehrnoosh Eskandari gazed into the eyes of her soon-to-be masterpiece.

She’s had a number of her art exhibited in a gallery, notably in Berlin, Germany, and in her home of Tehran, Iran. But Eskandari isn’t finishing up her work in Iran nor in Germany.

Her clump and once-clean studio is plastered with paint, brushes and canvases. The white walls once radiated light off it, but now the light has dimmed, each and every one of Eskandari’s piece of art.

Like many art students at CSUN, Eskandari has her own workspace located in a studio in the Art and Design Center. But unlike other students in CSUN’s Masters of Fine Art program, Eskandari traveled thousands of miles last year to study her passion.

“I think one of the things that’s strong about our master’s program specifically is we do have a lot of international students. We have a lot of diverse students that are attending the program,” said Edward Alfano, art department chair. “We have had many students from Iran come here and some who are American citizens now and some who aren’t but I think it’s just a place where, especially with the graduate program, that they research and they see the diversity of students that they find intriguing.”

According to the Student and Exchange Visitor Program, there are currently 1.05 million MFA students eligible to study U.S., and CSUN accepts students with a F-1 visa or J-1 visa. The visas are given to the students to enroll themselves into an English speaking program and accredited college. Nearly four percent of all students enrolled in higher-level education in the U.S. are international students.

The International Student and Study Abroad Resource Center, the U.S. has the world’s largest international student population, with over 800,000 students choosing the U.S. to broaden their education and life experience. CSUN, in particular, reports an increase of 375 new international students in both the undergraduate and graduate departments. The school also admitted 248 international-transfer students.

However, Alfano said that the program doesn’t have many international students studying for their bachelor’s degree.

He said the demographics of the area appeals to potential students who do the research. They will notice the vast diversity of students on campus Alfano said.

Eskandari explored schools in the U.S. and in other countries, but she ultimately chose CSUN to pursue her MFA.

“I’ve always wanted to be in L.A. or New York because I knew that the most active art community is in either city,” said Eskandari. “I started searching for different schools in L.A. and I chose CSUN because I heard a lot about the painting program.”

Although her emphasis is painting, she also creates sculptures, photography and multimedia projects.

With her curly brown hair, petite figure and pierced eyebrow piercing, Eskandari has a big personality with a lot of creative qualities, and carefully practices her craft daily.

Eskandari had her artwork showcased at “The Shed Gallery” at the Art and Design Center in the beginning of September. She spends the majority of her time at CSUN, dedicating herself to painting in her studio.

Aside from the glitz and glamour of L.A. that make this city attract thousands of international students to attend other universities, CSUN appeals to potential students because of the programs offered, like the MFA program.

Marzieh Karimi, 29-year-old art student, also pursuing the MFA program with a concentration in photography at CSUN. The Iran native searched for a school in the United States to spruce up his photography portfolio. By chance, the photographer found CSUN.

“The explanation of courses matched what I was looking for,” said Karimi. “I applied to a few other schools in the U.S. and got admission from another one, but finally decided to come and study here.”