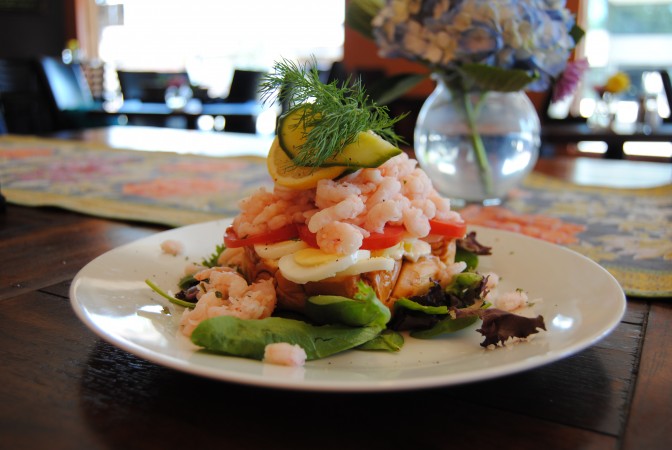 Los Angeles’ constantly expanding diversity allows the restaurant scene to be ever changing.

Many people are familiar with Latin, Asian, classic American and other types that our city has to offer, but a new trend sweeping L.A. is Scandinavian food. With an increasing number of Swedes coming to the U.S. every year, Swedish shops and cafés are blossoming in many corners of the city.

Enter Fortyone Fortyone; a breakfast and lunch restaurant in Toluca Lake with an international menu and Swedish specialties such as Swedish meatballs, Swedish pancakes, grav lax and much more.

The women-run business is a small restaurant with an uplifting presence that comes from its vibrant interior.

The chef, Linda Andersson, is the owner of Fortyone Fortyone.

It took Andersson many sleepless nights to get the restaurant running as she did doing everything by herself without any outside help or investors.

“Though it is still hard today and lots of work, I love what I do,” said Andersson “I have always said follow your passion, work hard, and you will do fine.”

The hostess and waitress, Tara DiBurro, is a former journalism student at CSUN and reporter for the Sundial.

“This was originally a catering firm, so Linda figured why not turn it into daytime restaurant as well,” said DiBurro, who has been working here since it opened a year and half ago.

Fortyone Fortyone specifically caters food to the film and TV studios that it’s surrounded by.

Their classic Swedish meatballs dish is the best you can get outside of Sweden. The meatballs are succulent and flavorful with gravy that compliments the meat and their mashed potatoes have great texture.

The dish, often eaten with pickled cucumbers, sticks to tradition with homemade pickled cucumbers. The only thing that lacked in this dish was the amount of lingonberry jam, but all in all a great dish.

By popular demand, the chef recently changed the shrimp salad back into the original shrimp sandwich. This traditional Swedish lunch item is served as an open-faced sandwich with a sliver of bread, which at Fortyone Fortyone is served as a brioche.

The brioche bun includes lettuce, a sliced hard-boiled egg, a dollop of mayonnaise, cucumber and dill, piled with shrimp and topped with a slice of lemon. The sandwich was a bit dry, which could have been better by adding more mayo and lemon juice on the shrimp.

Fortyone Fortyone is open Monday through Friday from 8 a.m. to 3 p.m. with breakfast served until 10:30 a.m.