Editorial: the right to solicit should be unregistered 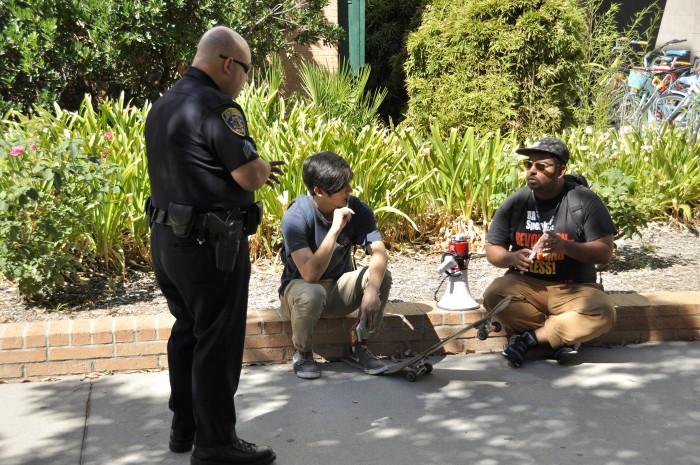 Students strolling around CSUN are likely used to viewing off-campus organizations protest and present their group’s message. At times it is a current social issue, while others focus more on expanding the “flock.”

To keep students feeling safe and somewhat secure, all of the organizations must register with the school’s Matador Involvement Center. In a Sundial news story from 2005, the Assistant Director of Student Development Vicki Allen said that soliciting on campus is a “privilege.”

Recently, an advocacy group was at CSUN protesting police brutality and sharing solidarity with the Black Lives Matter (BLM) movement. This group was not, however, registered to solicit on campus. The issue of being allowed to protest on a college campus was questioned by members of this group after being approached by CSUN police.

The issue of outside organizations being registered should no longer be in effect. While it may be put into place to curtail students’ anxieties, this registration serves as a limitation to free speech. In requiring people to have their organizations registered to protest, hand out fliers and interact with students, it exists as a barrier from freely gathering together. No such limitations should be made on state property.

Going as far back as the Free Speech Movement at Berkeley University, social movements have been welcome at most colleges across the nation. This may give off the impression that all colleges advocate for “liberals,” but those who make that assumption are forgetting the basis behind the First Amendment. This can be said based on the definition, but it can be argued that the ideology is irrelevant.

It is expected that some people would feel uncomfortable by angry protestors or feel offended by their message. Feeling uncomfortable and the necessity to register are quite obscure. Difference of belief, perspective, etc., is expected in a democracy such as this one. These same uncomfortable students can either continue walking or talk back without getting physically confrontational.

It should also be said that just because not every group is registered does not mean they do not always get away with it. Unless nearby authorities check on the status of the protesters, anyone has free range to be on campus and voice their political opinion and share with the student body what group they are advocating for.

“Do they always [get a permit]?” said Tom Piernik, the former director of Student Development and International Programs in 2005. “No. I don’t want to claim that we have total control over the people that come to the campus.”

Even as far back as ten years ago, solicitor registration has been such a lax policy that it may not as well exist. As an editorial board, we think that perhaps it is about time to reexamine this school policy. What should it take, a student-run organization solely based on free speech? Let’s allow another movement in favor of it.