Even good behavior should not hide behind a curtain 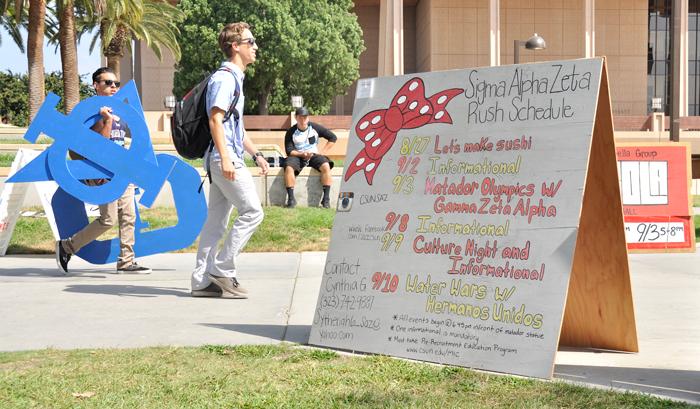 It has been impossible not to notice that the campus is once again alive with the voices of the members of the Greek system. As someone who is on the outside, I don’t give much of my attention to sororities or fraternities because they have never appealed to me.

However, I was surprised that they managed to sprout back up quickly considering the controversies regarding hazing that surrounded them last year.

When I first heard about the tragic situations that plagued the Greek system, I immediately felt that all of the Greek organizations should be banned from the university indefinitely because the events that occurred were and still are unforgivable. Everything could have been avoided if people would have just followed the rules.

The university does have policies against hazing in place, but of course no one took them seriously because it has been, as some people put it, a tradition to haze the newcomers.

I find that to be an excuse just to humiliate people by involving them in immature acts.

It was all fun and games until someone got hurt. Unfortunately, it had to come to that in order for everyone to finally open their eyes and take hazing seriously.

Now that some time has passed, and the Greek organizations have served their short sentence, my thoughts on them have reverted to neutral once again.

Admittedly, their presence, although sometimes irritable, does make the university feel alive. The campus can feel unwelcoming because everyone is just trying to avoid each other as much as they can, but with the Greek members cheerfully yelling at the people that pass by, the campus does feel like a vibrant community.

During my first year at CSUN, I would walk by what is dubbed the “Greek Quad” in front of Sierra Tower and see so many Greek organizations blasting their music, laughing and having a good time.

If I was an incoming freshman and I knew about the events that took place regarding hazing and the Greek system, I would not want to be involved in a fraternity at all. I would feel as if I would not be able to trust the people who would become my “brothers” if I rushed for a fraternity. I wouldn’t feel safe or comfortable knowing that I would probably be forced to engage in some questionable acts.

Then again, I know plenty of people that still want to be involved in the Greek life on campus and to them is say go for it.

The Greek organizations need to reestablish their credibility and create a new way to approach anyone they feel would make an excellent addition. These organizations also need to be much more open with the InterFraternity Council about what goes on behind closed doors in order to prevent another tragedy. There cannot be any more secrets or lies.

I often hear people say that sororities and fraternities cannot, under any circumstances, expose what goes on behind the curtain. That needs to change. If people know that someone within one the organizations is being treated unfairly or if they know that certain situations are victimizing the members, then it needs to be reported immediately.

A person’s life is more important than some vow of secrecy everyone supposedly needs to obey. Of course there will be objections.

Some might argue that it’s not in the spirit of the Greek system or that it has always been a rule not to tell anyone what goes on within the little groups. However in order to keep everyone safe and make them feel welcomed, there cannot be anymore secrecy. The Greek organizations say that the safety of their members is one of their main priorities, but I believe that still needs to be improved.

The members of the Greek community are trying to get back up on their feet and I respect that. Many have attended hazing prevention workshops and completed the new Greek 102 workshop, the sequel to the Greek 101 course already in place. They are taking responsibility for their actions and that’s a big step toward progress. I just hope that everyone has learned their lesson from the events that took place last year. Let’s just see how long this good behavior lasts.