Seven things to know about the CFA/CSU salary negotiations 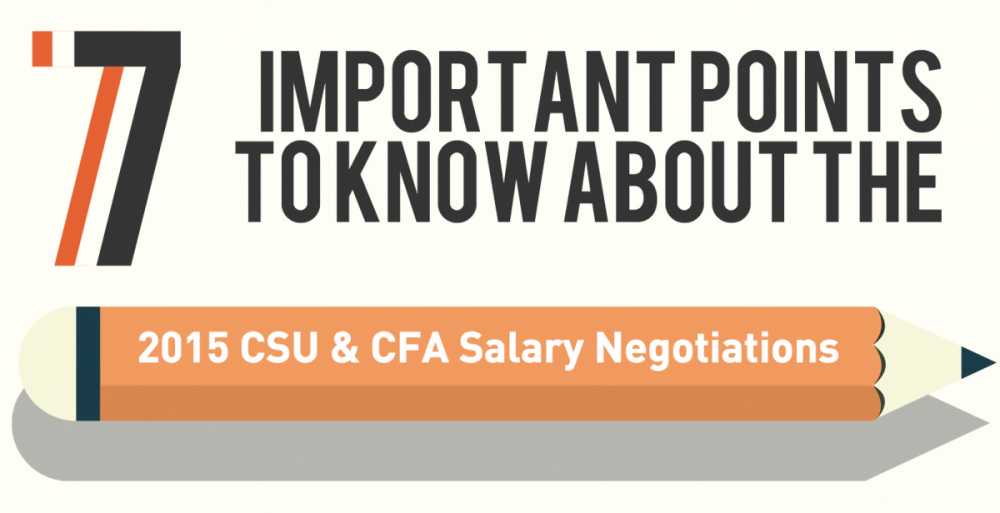 The California State University (CSU) Board of Trustees and the California Faculty Association (CFA) have a two-year contract signed last year that permits the reopening of salary negotiations.

The process began in spring, where both parties gave their own proposals regarding the salary increase. They did not come to terms, so a state agency was petitioned to oversee a mediation between the two parties.

Here are seven important points about the current salary negotiations between the CSU and CFA:

The CFA will hold an upcoming vote on Oct. 19 regarding whether or not CFA members will go on strike if they are unable to come to terms with the CSU. There will be no strike if the CSU meets the terms of the CFA, or if members of the CFA vote against having a strike regardless of outcome. The CFA is only preparing to go on strike in case they get to the end of the statutory process without a settlement.

2. The CFA is advocating for a five percent increase

The CFA is asking for a five percent salary increase for all faculty in the 2015-2016 Academic Year and a Service Salary Increase – an in-range salary increase similar to a step increase – for faculty who are eligible.

3. The CSU is advocating for a two percent increase

The CSU proposed a general two percent salary increase for all faculty. That is $65.5 million for a two percent compensation pool for all employees.

4. Both sides meet next Thursday for final talks

Oct. 8 is the last day of mediation between the CSU and CFA. If they do not come to a resolution on this day, then they will move to the fact-finding process.

5. A neutral third-party will mediate if negotiations do not progress

During the fact-finding stage, a neutral third party is chosen to hear both sides. Together, with a representative from each bargaining team, the neutral party writes a report that recommends how a settlement could be achieved. After the sides have 10 days to study the report and perhaps reach a settlement, the fact-finding report becomes public. After this, if the parties still have not come to a resolution, the process then begins all over again and a strike may occur depending on the Oct. 19th vote.

The last CFA strike was Nov. 17, 2011 at the East Bay and Dominguez Hills campuses. The one-day strike was successful and the CFA’s terms were met.

7. The last faculty salary increase was in 2014

CSU faculty received pay increases in 2013-14 where most employees received a 1.34 percent salary increase. In 2014-15, all employee groups – including faculty – received a 3 percent compensation pool increase.

More information can be found at both parties’ pages:

*This article previously stated that in point number seven, the last salary increase for faculty was a result from the November 2011 strike and increased all faculty salaries by 1.6 percent, while the salaries of tenure faculty received a three percent increase in salary. This has been corrected to include specific dates and the correction of the 1.6 percent to 1.34 percent increase for the 2013-14 period.