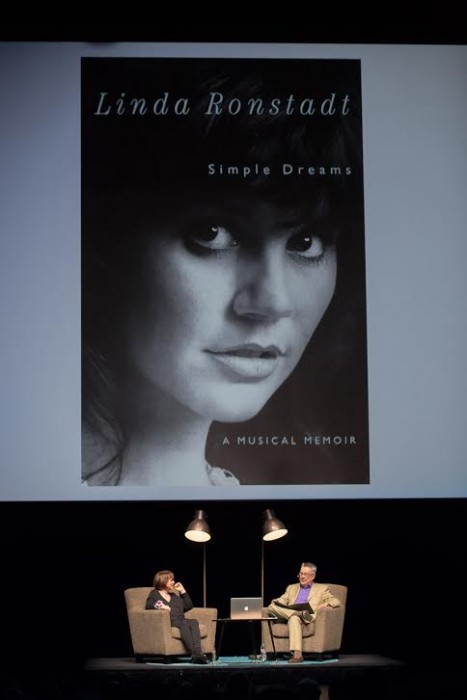 Although she may have stopped singing indefinitely, Linda Ronstadt is certainly far from giving up her role as an entertainer.

As part of a new conversation series with the seminal Mexican-American songstress of the ’70s and ’80s, Ronstadt expounds at great lengths about her life and career on stage – all the while without actually performing.

“I can’t think of a time that I wasn’t surrounded by music,” said Ronstadt. “Even growing up in a pueblo in Tucson, I can remember singing songs as soon as I could make noise.”

Detailing her life through the music of Mexico, Los Angeles and the American Southwest, Ronstadt sat down with Los Angeles producer Dan Guerrero at the Valley Performing Arts Center at California State University Northridge on Tuesday night. Despite Ronstadt’s massive acclaim since her flower power days in the Stone Poneys, one may not realize that her career has been much more complex than simply a pop singer in the United States.

The conversation, led by Guerrero, took the audience through a chronological survey of Ronstadt’s life, starting in Arizona and ending up as Ronstadt’s career began to slow down in the ‘90s.

“Think of it as if you’re at a really boring party and you happen to overhear two old friends having a really interesting conversation,” said Guerrero. “You can’t help but to slide over and listen.”

The crowd at the VPAC gave Linda a standing ovation as the curtains parted to reveal her on stage, looking comfortable in an oversized chair.

Having famously given up the stage in 2009 due to Parkinson’s Disease, Ronstadt was nonetheless open to speaking about her time in the music industry and her multi-faceted career.

As master of ceremonies, Guerrero took Linda and the crowd through a series of pictures and video clips from her life, ranging to the early days of the Laurel Canyon music scene to country music styling with Dolly Parton to the later years of Ronstadt’s return to Spanish-oriented music.

The crowd wildly applauded and hollered at nearly every sentiment Ronstadt had to offer, from the minutiae of her horse’s name to stories about sharing the stage with Aaron Neville. Such adoration soon turned from reverent to insufferable, with the hooting and applause often drowning out Ronstadt’s storytelling.

Still, Ronstadt’s insight wasn’t marred by the uncouth nature of the crowd or the technical deficiencies of the VPAC, with the slideshow of pictures presented often delaying the flow of conversation; Her natural ability as a storyteller saved the evening.

Following the conversation was a performance from CSUN Chicano studies professor Conjunto Hueyapan and his daughter Ixya Herrera, who performed two songs in honor of Ronstadt. “Linda was the one that taught me how to sing!” Ixya exclaimed after belting out an enormously talented number that brought the crowd to its feet.

The evening was capped off by a few pre-screened questions from the audience, most of which ended up as a sentiment thanking Ronstadt for her music.

“Music makes the mind better,” said Ronstadt. “Teach music to children, teach it to people you know. It will make for better people and a better world.”