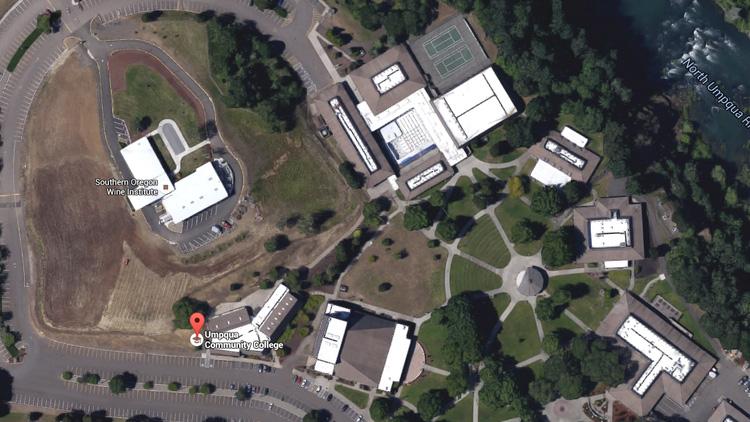 A shooting was reported at Umpqua Community College in Roseberg, Ore., on Oct. 1, 2015. (Google Maps)

Mercer killed nine people on the Oregon community college campus on Thursday morning and hospitalized seven others. Officials said he then committed suicide.

Investigators suspect Mercer may have been a student after they found a receipt for two books from the campus bookstore belonging to him.

On late Thursday, the Associated Press reported that Mercer owned three pistols, a rifle, and five additional magazines, citing a report from the Bureau of Alcohol, Tobacco, Firearms and Explosives.

Investigators have not made any conclusions as to Mercer’s motive for the shooting, however a blog linked to the gunman suggests he was tracking high-profile shootings such as the Sandy Hook Elementary School incident and the murder of journalists Alison Parker and Adam Ward by Vester Lee Flanagan, who shot both while they were taping an interview in Roanoke, Virginia.

A fatal shooting at an Oregon community college has left at least 13 people dead.

The suspected gunman was identified as a 20-year-old male, said Oregon Governor Kate Brown during a press conference at Umpqua Community College, the site of the shooting. No further details were released.

This latest incident comes after the September shooting incident at Delta State University in Cleveland, Mississippi.

In the event of an active shooter near or on-campus on CSUN, campus police takes steps to first confirm any reported shooting incidents. Police services then communicate information and safety precautions to students, faculty and campus personnel through the university’s emergency broadcast system Blackboard Connect, according to CSUN Chief of Police Anne Glavin.

Blackboard Connect sends out information and details on response measures to emergencies using voice, email and text messages. Information is also relayed via screen alerts to campus computers connected to the CSUN server, according to the CSUN annual security report.

“The first message coming out would tell people to shelter in place, stay in place or leave a certain area,” said Glavin.

Evacuation measures, meanwhile, would take place according to the location and circumstances of the shooting. Glavin said it’s likely that the campus population will be told to stay in place and avoid the identified area of shooting.

Depending on the longevity of the shooting incident, emergency messages are relayed in about 20 minute intervals.

More details on specific safety measures to take in the event of an active shooting on campus can be found in the latest CSUN annual security report.