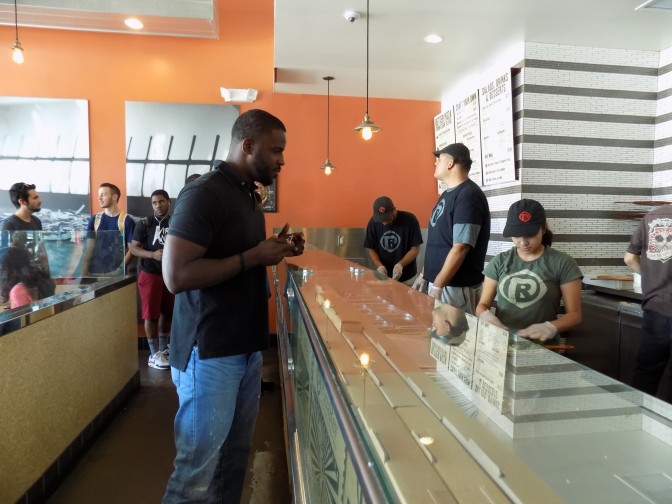 The BMI is a mentorship program that is aimed to motivate and support minority male students on campus in achieving academic success.

“These guys are already ahead of the game. A lot of people [come] from communities, at least I did, where a lot of guys didn’t go to college. But people are taking seven years to graduate, and that’s an issue,” said Sam Prater, a BMI advisor and a student in the Educational Leadership and Policy Studies Doctoral Program with a focus in community college leadership privileges at CSUN. “The idea is to host events to get them together and support each other, whether it’s bowling or skating, to meetings about study skills or how to manage your money.”

Although the organization is only 2 years old, the group has increased significantly in size, starting at five members and currently holding 50.

“I like how it’s a safe environment. It’s a place you can come and talk about issues that normally wouldn’t be appropriate because you know the setting isn’t right,” said Robert Wilson III, a communications studies major at CSUN. “A lot of your friends don’t want to have a conversation about police brutality or other strange issues. It’s kind of cool there is a place you can come in and be a little vulnerable.”

Despite being an organization for African American males, anyone is welcome to come and attend a meeting.

“Everyone can come and support. I felt like at first I could never go to meetings because I was female. This was a safe place for males, I didn’t want the female presence to take that,” said Zakiyah Webster a communications studies major at CSUN. “Anyone is welcome, but at the same time we got to realize they don’t have to be inclusive.”

Prater explained that although the organization wants students to have fun, its main goal is to help minorities progress academically and improve retention and graduation rates.

“BMI prepares you for the real world, like passing your classes and taking enough units. It really puts things into perspective. It’s more of an internal-type thought process as opposed to them telling you to do something. When you hear about the issues and how hard life is going to get beyond college doors, it kind of makes you mentally tougher and want to strive for more,” said Wilson III.

Prater explained that despite the large amount of students on campus, only 2,000 are African American.

“There is a real need for African American men to come together to help fill a sense of support and belonging on campus. The student group exists to create a brotherhood–a family to support each other among black men,” said Prater.

In addition to academics and leisure, the organization goes a little deeper for some.

“Men are taught to not to be vulnerable or express their emotions. Its different when you have a place like BMI on campus where you can talk to men that look like you, have had similar experiences and can say, I get you. That’s rare to come by. Even if someone looks like you, it doesn’t mean that they understand you. BMI helps create that understanding of individuals,” said Webster.