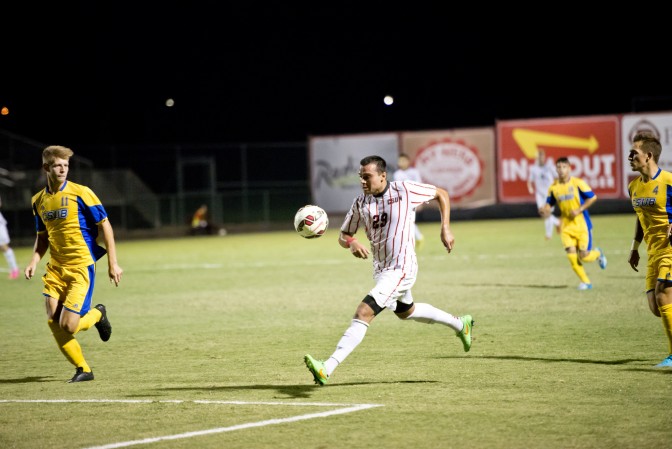 CSUN loses its first game in four tries, after allowing Cal Poly to slip by in a 1-0 loss. Photo credit: File Photo/The Sundial

CSUN (4-4-1) saw its three-game winning streak come to an end as they were beaten by the California Polytechnic State University Mustangs (6-2-1) 1-0 on Thursday night.

In their first home game since Sept. 13, the Matadors were looking to build on the successful road trip that saw them go 3-0 by opening Big West Conference play against a Mustangs team that hasn’t been great on the road this season.

Things would not go according to plan.

With defender’s circling around him, Cal Poly’s senior midfielder Chase Minter scored the only goal of the game with a stunning bicycle kick in the 11th minute.

“Ball came across, they flicked it back in the middle, the ball popped up, I couldn’t really see the ball anymore because he’s a little smaller than our defenders,” said CSUN senior goalkeeper Adam Hobbs. “But he got a good whip on the ball and it dipped just over my hand and right under the bar.”

The chance was crucial because opportunities came few and far between, as Hobbs would have one save as both teams would only have two shots on goal.

Before trailing early in the first half, the Matadors came with the same style of play that helped them win three consecutive games.

It actually took the Matadors only 10 seconds to get their first shot of the game when sophomore freshman Jeremy Degraffenreidt was able to beat Cal Poly’s defender on a through ball but had his shot blocked by Cal Poly’s senior goalkeeper Wade Hamilton.

CSUN would continue to put pressure on the Mustangs defense, as sophomore midfielder Steven Manios shot in the fifth minute hit the bottom right post.

Ten minutes later, CSUN senior midfielder Carlos Gonzalez almost had the equalizer when his free kick was blocked by Hamilton with a diving effort.

Before allowing the goal, the Matadors defense continued to play well as previous games as the Mustangs could not gain possession on the Matadors side and did not get their fist shot attempt until they scored.

Although the Matadors were in an early deficit, they had several opportunities throughout the game but they could not find the back of the net.

“You got to produce opportunities to make goals, I think we could have a little bit more quality upfront,”CSUN head coach Terry Davila said after the game. “We did very well in controlling the pace of the game, but we had to have more quality going upfront.”

The Matadors were unable to take advantage of them, as they outshot Cal Poly 7-5, they also took more corner kicks as they had six, while the Mustangs took four.

The game did not see many offensive chances for both teams as it was more of a physical defensive battle, both defenses tried to establish themselves from the beginning of the game and for the most part, the referee let them play on, but there were many fouls both teams thought went uncalled.

Both teams would be called for nine fouls for the game and CSUN’s junior midfielder Juan Samayoa and junior defender Patrick Hickman were given yellow cards.

CSUN would try for a late push in the final 15 minutes but the effort was to no avail, as they would only get one shot on goal.

CSUN will have to turn their focus onto their UC Santa Barbara and try to do what they did this game but with a different outcome that sees them earning a win.

“We’re coming for Santa Barbara, everyone is saying they’re pretty good, they’re this and that, we’re not too worried about what everyone else is saying,” Degraffenreidt said. “We’re going to come out and bring it to them, we’re not scared…we’re ready.”

The Matadors will have a short period to dwell on the loss and seek their first conference win as they host the University of California, Santa Barbara Gauchos this Saturday at 5 p.m.