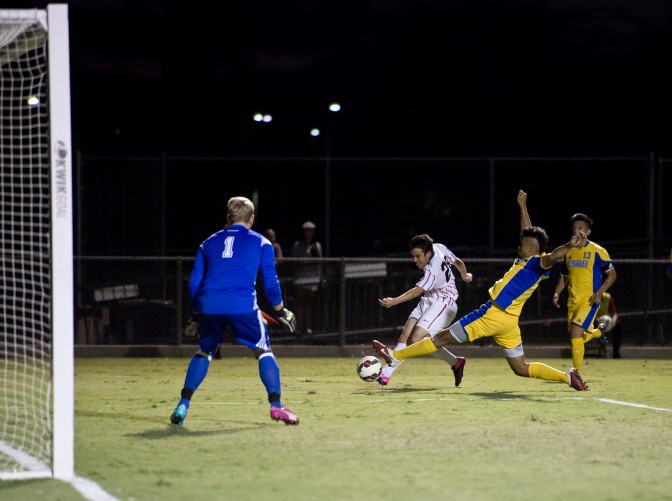 The Matadors couldn't capitalize on offensive opportunities in their 2-1 loss to the Gauchos. Photo credit: David Hawkins

The Matadors were able to tie the game in the first half but would lose in extra time in the 97th minute when UCSB junior forward Nick DePuy scored the game-winning goal on the third rebound attempt after a great effort by CSUN senior goalkeeper Adam Hobbs on the previous two.

“We didn’t put away our chances and again they scored theirs, it could’ve gone either way but it went their way,” said CSUN head coach Terry Davila.

With less than four minutes in regulation, Hobbs had three crucial saves to force the game into extra time, after blocking the first attempt, Hobbs blocked the rebound with a diving effort and then cleared the ball on the third attempt by the Gauchos.

Despite giving up two goals, Hobbs was a huge reason the Matadors had a chance at the end to win the game, as he had 10 saves.

On the other end, UCSB freshman goalkeeper Justin Vom Steeg had two saves.

For the second straight game, the Matadors defense got off to a strong start but would give up the lead to the Gauchos first shot attempt late in the first half.

Davila says they don’t need to make changes; they just have to be persistent with their game plan and keep improving.

DePuy would get the game’s first score in the 37th minute when he headed it past Hobbs off a cross.

The Matadors would respond six minutes later when CSUN sophomore forward Dean Wright would score the equalizer when he was left alone and scored past a diving Steeg.

“I saw we won the ball and I saw Bradley getting to it first, I saw him play it and I just ran,” said Wright. “The goalie came out and I just shot it to the left.”

Freshman midfielder Bradley Mulvey was credited with the assist, on Wright’s second goal of the season.

For the most part, the Matadors were able to control the pace of the first half as they played well on both sides of the ball.

The Gauchos didn’t get their first shot on goal until the first score by DePuy.

In the first half, CSUN only allowed three shots, while they took four shots and a corner kick.

In the second half, UCSB increased the pressure on the Matadors defense as they took four times as many shots than in the first half while the Matadors only took a single shot.

For the game, UCSB had 18 shots with 14 being on goal and the Matadors only attempted five shots with three on goal.

The offensive pressure from UCSB in the second half seemed to tire out the defense.

“Part of it is fatigue definitely, it’s a tough game, especially for our midfielders and our forwards they have a lot of responsibility to run around, that’s just how the game is sometimes,” said CSUN junior defender Patrick Hickman. “They gave us chances later in the game and we gave them chances, so it’s just a balance of the game.”

Like they have been plagued earlier in the season, the Matadors have had several offensive opportunities, but have come up empty handed.

“We can hold the ball but we just have to score on our chances,” Wright said.

Heading into their third conference game, that Matadors will have to capitalize on those opportunities and take some of the load off of the defense.

“Hopefully we can get that same stride we had last week on the road, the key on the road in the Big West is solid defense,” said Hickman. “We just have to put away our chances and make sure we do all our responsibilities and we’ll get some wins.”

The Matadors will look to turn things around on the road to help end their current losing streak as they take the University of California Davis Aggies this Thursday at 4 p.m. at Aggie Soccer Field.