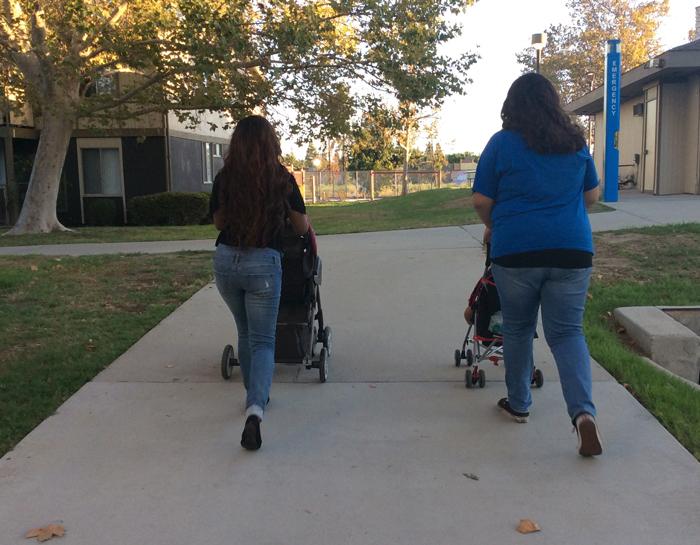 Kelly Amaya, left, a 23-year-old junior majoring in Sociology and Susana Martinez, a 20-year-old junior double-majoring in Urban Studies and Planning and Family Consumer Sciences, push their toddler's strollers in to the first Mothers in Unity meeting held in the on-campus in the family housing units on Thursday, Oct. 1, at 6p.m. (Danielle Parmentier / The Sundial) Photo credit: Danielle Parmentier

Shower, get dressed, start breakfast, then wake up two-year-old Isabella to get her fed, dressed and ready to go to day care only after organizing schoolbooks and homework assignments for the day.

This is only part of the weekly routine in social welfare major Kelly Amaya’s morning that begins at 5 a.m. and ends, like many of her peers, around 11:30 at night.

“Nearly 25 percent of college students in the U.S., or four million students, have dependent children,” the Institute for Women’s Policy Research, or IWPR, said in a March 2013 briefing paper titled “College Students with Children are Common and Face Many Challenges in Completing Higher Education.”

A junior at 23 years old, Amaya is a full-time student and a full-time single parent who is trying to create a new on-campus support group called Mothers in Unity for student parents, whom she feels are underrepresented on campus.

According to the briefing, student parents face demands with more than 40 percent working full-time or more. It further states that over half devote 30 hours each week to “care-giving activities.”

“Even in the face of these pressures,” the briefing says, “students with children, like other students who are older than average, have higher GPAs than non-parents.”

With 14-month-old Alex at home, Leilani Peltz, 27, a senior majoring in journalism and minoring in Jewish studies, strives for good grades to impress future employers. She reiterates an issue that Amaya is trying to help alleviate: the lack of a sense of on-campus support and community for students who are also parents.

“It’s hard, you know. I had to figure out priorities, and so I didn’t get into campus stuff. I can’t go out to the Big Show and those things,” Peltz said. “Having Alex changed the way I experienced college … like people will invite [my husband and me] out and we can’t go.”

Some student parents feel as if their needs and lifestyles aren’t understood by students, which may not come as a surprise. What these students feel remains unaddressed is that some professors and campus-affiliated organizations are unfriendly towards families and their needs.

“I feel that there’s no representation on campus for people with dependents,” Amaya said. “The Children’s Center is a great day care but they aren’t providing anything to bring the parents together.”

Mothers in Unity hopes to foster a sense of community for CSUN student parents and to bring awareness to other people and parents on campus, as well as to establish a group that actually represents the needs of parents who are students.

“We are looked down upon by others for being a mom in college, but people don’t realize that the demographic of women having kids has changed,” Peltz said.

Hoping to set a good example for their children and give them a better life is a common dream for parents. But the struggle to make a living, get good grades and eventually graduate with a degree is a dream reserved only for those parents experiencing college life and taking classes, which is why Peltz and Amaya seek out support from others in situations similar to their own.

Support and encouragement is essential according to Amaya, who adds that this organization will be the first Associated Student approved student parent organization.

“Parents have a stigma attached to them,” said Amaya. “So I want to tell them that we do have the strength to continue, and we can be students and parents too.”