The Clinton legacy: the good, the bad, the weird and all of the above 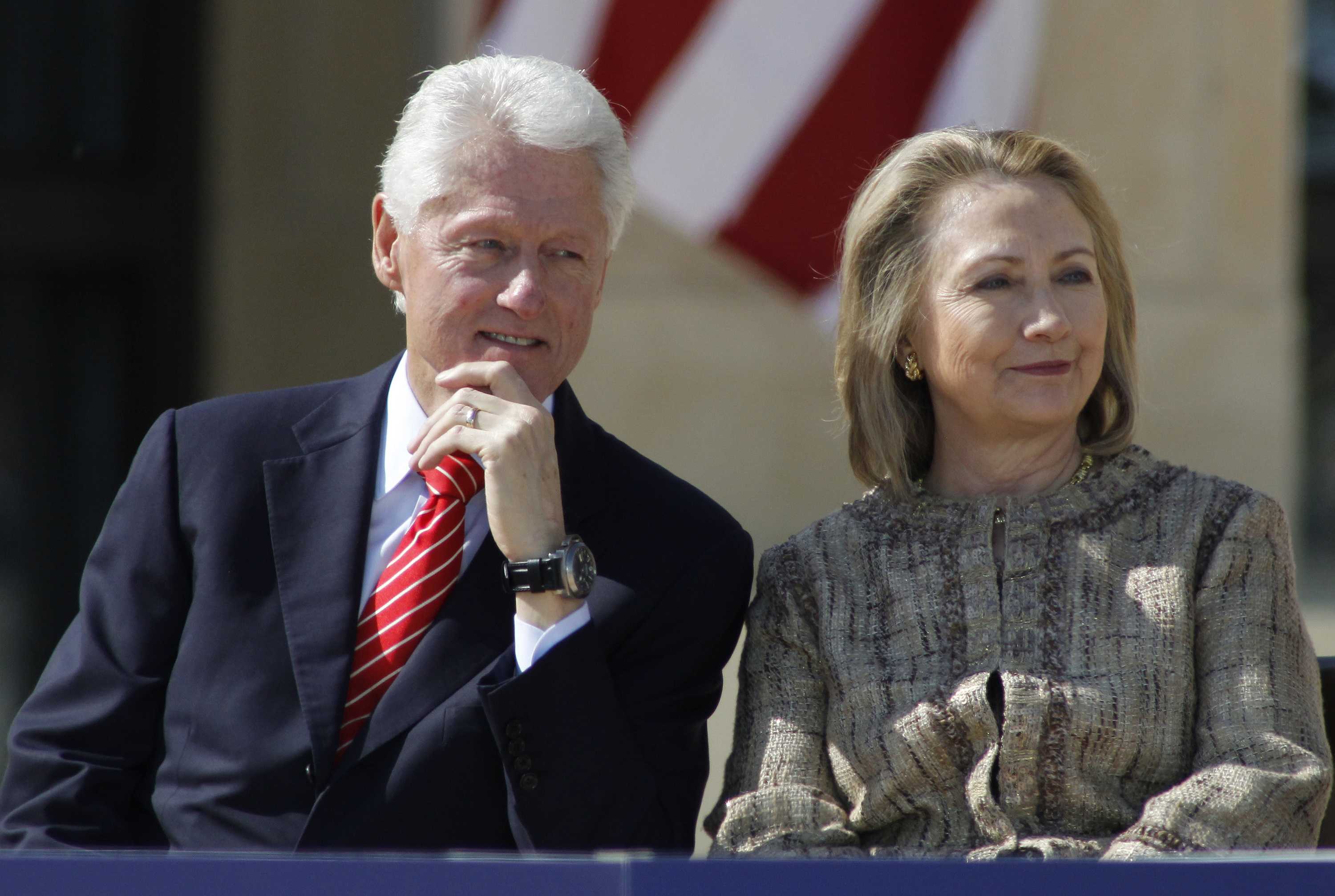 The first debate among the five [as of this writing] Democratic presidential candidates is slowly creeping closer. As the American people wait to see the former secretary of state, New York senator and First Lady Hillary Rodham Clinton [HRC] stand on stage with Vermont senator Bernie Sanders, in the first presidential debate that does not include the physical presence of GOP front-runner Donald Trump.

Mrs. Clinton is still at a good position to strike hard enough to win her party’s nomination. Her greatest political foe his her political history. This story will not be referencing her career as secretary of state and the Benghazi conundrum, but on her husband’s presidency and how she may reflect her own more liberal version of some of Bill Clinton’s mistakes as commander-in-chief.

The following are five considerable books that directly address the policies and mannerisms behind a strange and politically-charged presidency. Fair warning: though not all of Bill’s actions will likely be reenacted by Hillary (i.e., the Lewinsky Scandal), she may bring a similar proverbial hammer to the office of president of the United States.

1. “No One Left to Lie To: The Triangulations of William Jefferson Clinton” – Christopher Hitchens [1999], Twelve Books

The first of these readings was by one of Clinton’s biggest critics, the late journalist Christopher Hitchens, who found the Clinton years to not be what they were promised. He accused Clinton of committing triangulation, in which a political figure places their own objectives above their party and the opposition while still making the opposition happy.

“This little book has no ‘hidden agenda,'” Hitchens said. “It is offered in the most cheerful and open polemical spirit, as an attack on a crooked president and a corrupt and reactionary administration.”

Hitchens criticizes Clinton’s authorization [while he was governor] to execute a lobotomized criminal, the bombing of a pharmaceutical plant in Sudan and his signing of the Defense of Marriage Act [DOMA].

The critique culminates in Hitchens’ argument that Monica Lewinsky, an intern to the president, was forced into a “sexual relations” with Clinton. This scandal is magnified when compared to the alleged interactions between Clinton and two other women, Ginnifer Flowers and Juanita Broaddrick.

Before the book ends, Hitchens also gives his analysis on the then-First Lady.

“She is a tyrant and a bully when she can drive to be and an integrating populist when that will serve,” Hitchens wrote. “She is entirely un-self-critical and quite devoid of reflective capacity, and has never found that any of her own fault… she is not just a liar but a lie; a phone construct of shreds and patches and hysterical, self-pitying, demagogic improvisations.”

Keep in mind, this book serves as a critique of a “liberal” president from the left. The confusion of Hitchens’ political slant is almost mythic, and though he may go far with his criticisms of the forty-second president, he still lays out a frightful, fact-based imagining of how things can be under another Clinton presidency.

Written by the creator of gonzo journalism, the late Hunter S. Thompson had his own warped views of Clinton during his campaign in 1992. While not as analytical as his book on the 1972 presidential election, Thompson’s interaction with the president-to-be and his handlers, along with the then-executive vice president of CNN Ed Turner, help the reader understand a quirkier side to Clinton’s first run alongside incumbent president George H.W. Bush and third party candidate and businessman Ross Perot.

The ’92 election has been analogized to the current election, even after GOP front-runner Donald Trump said he will not aim at a potential third party run, like Perot.

“My real one fear about Bill Clinton is that he might fail utterly…” Thompson said, “and bring another 12 years of greedy Republican looting…”

Early in the book, Thompson gives a fictionalized account based in reality on his first encounter with candidate Clinton. According to Thompson, he was somewhat easy to speak to, but frightening after he began to devour a basket of french fries.

The further along this election went, Thompson looked at Mr. Clinton as a political animal rather than a honest politician, which is how he saw 1972 Democratic nominee George McGovern. A similar question in “trustworthiness” has been exceedingly prevalent during our current election with HRC.

Even after the losses of Democratic candidates such as McGovern, President Jimmy Carter, Walter Mondale and Michael Dukakis, Clinton’s victory instilled that typical gonzo “fear” into Thompson that spiraled further with the results of the 2000 recount election.

“Bill Clinton had never impressed me,” Thompson wrote, “and George [Herbert Walker] Bush was a criminal fraud worse than [Richard] Nixon… with all the candidates being losers, bums and degenerates, it was a good year to get out of the politics business.”

One of the best journalists in Washington, D.C. today, Mark Leibovich released a collection of profiles which he has written over the last decade.

He refers to the personalities behind senator John McCain, television and radio hosts Chris Matthews and Glenn Beck, former Florida governor Jeb Bush, the late senator Ted Kennedy and, of course, Mrs. Clinton. This analysis focuses on her personality in recent years rather than her husband’s presidency.

In his first profile about her, “Public Actors: Hillary Drank Two Glasses of Red Wine,” Leibovich wrote about how she felt that she was “the only person in the universe” as a youth. The preceding quote about Clinton suggests that she sees herself in a bubble where she may see herself as infallible, untouchable. Perhaps this ties in with Hitchens’ comments about her?

“What happened to that person?” Leibovich wrote. “We all grow up, theoretically. But not in such an insanely studied way or with such meditation or accumulated mystique and madness that surrounds people who choose this life.”

In his second profile on HRC, titled “Clinton Proudly Talks of Scars Keeping Her Guard Up,” Leibovich reported on a eulogy she gave for a friend of hers, political science professor Diane Blair. This also relates back to her trustworthiness, which as I mentioned has been brought into question in recent months. The profile also details some of her rigidity as a political figure.

“Perhaps more than any other candidate,” Leibovich wrote, “Mrs. Clinton faces an unusual challenge in her quest for the presidency. After a political lifetime of public battles, suspicions and humiliations,she must prove she is not too hardened to inspire, or too wary to truly lead.”

Maybe that ad where she tells the viewer “We’ve never had a grandmother” for president is her best attempt at ending that rigid demeanor that a portion of the country has been accustomed to for over 20 years?

As a guide to police history in America, investigative journalist Radley Balko’s “Rise of the Warrior Cop” documents the rise of America’s police forces as fully mobilized units prepared to take out the enemy, the antithesis of the old slogan “serve and protect.” Balko provides extreme detail to Mr. Clinton’s participation in the ongoing “war on drugs,” which started during the Nixon years.

“The election of Bill Clinton in 1992 gave hope to some in the drug reform community,” Balko wrote, “[he] might bring a less aggressive and less militaristic approach to federal drug policy. Those hopes were dashed pretty quickly.”

Balko recalls Clinton’s policies as being less transparent and not being too kind to those who committed minor drug offenses. He described these firm new policies as “aggressive, often violent, and usually a net loss for civil liberties…”

An ongoing curiosity toward the Obama administration has been the lack of ending some of those Clinton era policies that have resulted in many being imprisoned for such minor drug offenses.

While it is clear candidates such as Rand Paul and Bernie Sanders want to limit the insane amount of minor drug offenders, Mrs. Clinton has announced her own $10 billion plan “to combat the escalating drug epidemic that she says has swept through rural America.”

Is this another creep back toward her husband’s policies? Balko mentions a federal judge’s critique of the Clinton administration’s warning toward doctors to not discuss about how terminally ill patients can benefit from medicinal marijuana.

While there are states, such as California, that are aiming at voting to legalize marijuana in the 2016 election, a president-elect Clinton may not be as lenient as Barack Obama was toward this result of the 2012 election in Colorado and the state of Washington. Overall, Balko’s book delivers a good insight into how drug laws and militarized police became the norm under the administrations of Clinton, Bush and Obama, and how it may look with the following presidency.

In this last book recommendation, Jeremy Scahill gives one of the greatest accounts on the Global War on Terror [GWT], providing exquisite details even after the death of Osama bin Laden while questioning the constitutionality of imam Anwar al-Awlaki’s death at the camera and missile of a drone.

Of course, he describes how the policies put into place by Mr. Clinton laid the groundwork for George W. Bush’s wars in Afghanistan and Iraq. Clinton decided not to use any Special Ops Forces to go after bin Laden in the late 1990s, leading to Bush secretary of defense Donald Rumsfeld starting “the darkest of the US military forces front and center in the US war machine, and 9/11 had accelerated [Rumsfeld’s] plans.”

Clinton was able to work around the government’s assassination ban by clarifying that it did not apply to foreign terrorists, which led to Operation Desert Fox in 1998, a bombing campaign in Iraq.

“Rumsfeld and [vice president Dick] Cheney had padded the administration with leading neoconservatives who had spent the Clinton era effectively operations a shadow government,” Scahill wrote.

Now imagine if Mrs. Clinton repeats this for a future Republican president…now, I understand this is massive presumption, but be careful to doubt this if something remotely similar comes to pass.

Clinton’s actions are likely not always attributed with regard to Bush’s anti-terror policies. But they are something to keep in mind, given the possibility for his wife’s chances at being more liberal than him but possibly less liberal than Obama.

Scahill also documents HRC’s tenure as Obama’s secretary of state, recalling her presence in Obama’s situation room during the assassination of bin Laden. He stops short of 2012, when the now-politicized Benghazi incident occurred.

I only suggest these books so that people understand what Mr. Clinton’s years were like and what HRC was doing during some of those years. But as they do think and act similarly, would she be like him? A sex scandal is not what I am aiming for, but it is the political actions that people need to take into mind when they see Clinton debate her Democratic and potentially Republican contemporaries down the road. She has her popularity, but nothing lasts forever.