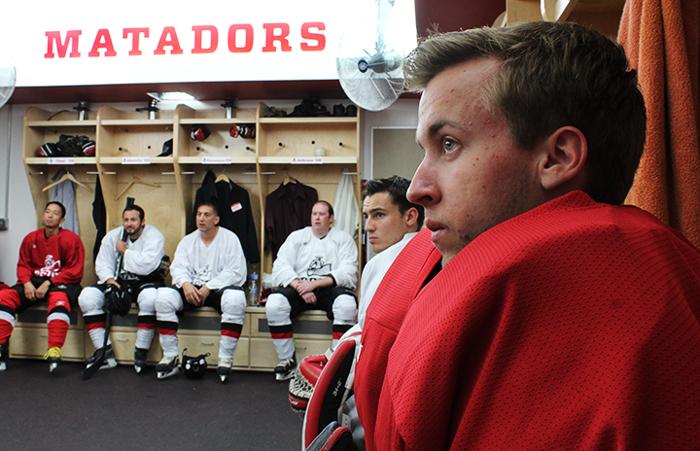 Gary Wells, a graphics art major from the class of 1976, leans against his hockey stick and fiddles with his gloves, in preparation for CSUN ice hockey’s annual alumni hockey game.

“I’ve gotten a connection with my past, a sense of completing the circle,” Wells said, in reference to the alumni system that the hockey program has put together over the last two years.

What the CSUN Ice Hockey program has done is allow their current players to meet several alumni who have had similar educational backgrounds, allowing them to foster professional relationships, not only in one night, but over the course of their college careers.

“I think it’s an amazing opportunity, being a college student, sometimes you don’t get to talk to people that are in your field, that are already out there doing the work,” said Andrew Lagaly, a senior forward, and construction management major. “For me I talk to a contractor in here who has been working in the field for over 30 years, he gave me advice being a construction management major, saying ‘You know what these are opportunities that weren’t available to me when I was a student.’”

And those associated with the program—whether it be players or alum—take a deep sense of pride in their commitment to excellence on and off the ice, as the program also has a higher GPA requirement than that than the one their league requires.

“It looks like they’re gonna really be able to benefit from having a really good counterbalance on being able to work really hard from school, and work really hard on the ice,” said Gevork Kazanchyan, an alum from the class of 2002, who majored in environmental and occupational health, and now teaches at CSUN.

Despite the sentimentality the system provides for alum, the opportunity to provide consistent professional guidance for students is something that alum value and find rewarding.

“I’m going to make myself available to continue to mentor any of these students that are looking for that,” said Kazanchyan. “For me, if they want to reach out to me, and want to stay in contact, that’s something I’m getting out of it because it’s an opportunity for me to help the next generation blossom.”

In addition to being able to have professional guidance, having alum that used to be players adds a different dimension to professional networking.

Even for those who have already transitioned into professional lifestyles and environments, they understand that networking with people of a similar background in a casual setting is far more effective.

“It’s good to talk to the guy next to you on the bench and get a perspective of what’s gonna happen to you and possibly make a connection that way as well,” said Anthony Kendryna, a finance major from the class of 2012, who is now an analyst at CBRE. Kendryna says the team provides a new way of bonding.

“It’s so much less formal. It’s a way to get to know everyone to see who they really are, not the shell that they are giving out.”

That common bond of college hockey has also been a shared source of preparation and motivation for all parties involved as well.

“On the ice it’s a real communicative sport,” said senior forward, and business management major, Alex Reints. “You get to see different sides of people when you play.”

More than anything, the goal of the alumni system is to provide current players with a tangible vision of what life is like after hockey and college.

And with several players closing their college hockey careers, being able to cherish what they have and take the next step in their lives is integral.

“You just want to play your heart out now. When you’re playing you don’t realize how fun it is, and you take it for granted,” said Lagaly. “But you gotta understand that this isn’t forever, you only have so long to play.”

And because of the alumni system in place, those players like Lagaly have a chance to get the rest of their lives started.

“I hope I can meet some of these younger guys on the team, and see their abilities,” said Kendryna. “Hopefully one day I can help them get a job if that’s what they’re looking for.”