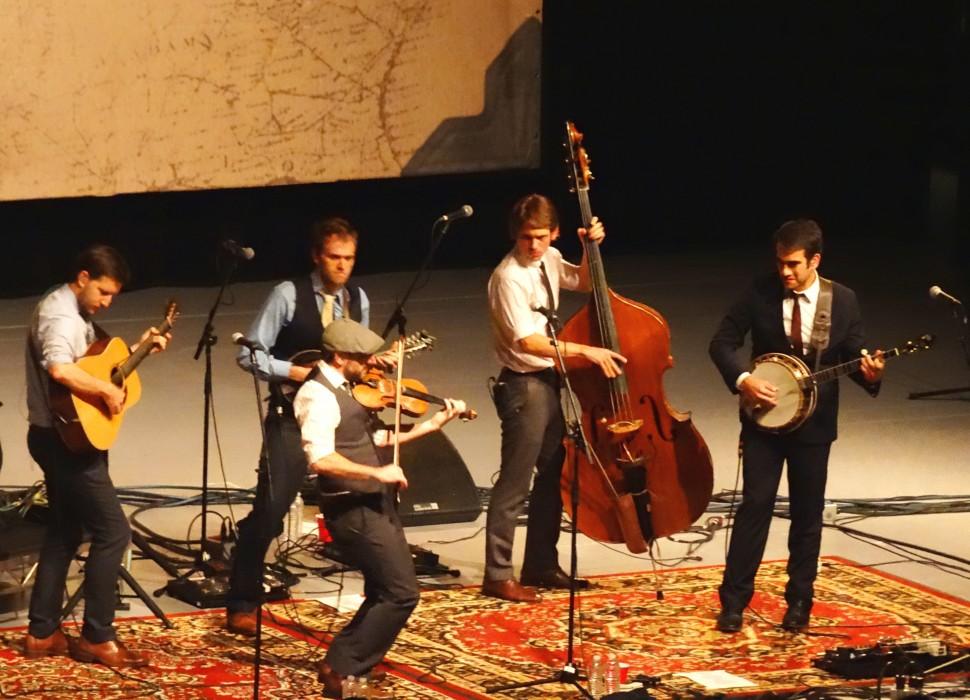 Though touting bands decidedly not the textbook definition of bluegrass, the Los Angeles Bluegrass Situation at The Greek Theater on Oct. 2 was nonetheless one of the most dedicated folk, roots and Americana music events in Southern California.

With the musical stylings of indie darling Dawes, The Punch Brothers, The Lone Bellow, and several other artists representing a traditional American discourse of performing music, the LA Bluegrass Situation saw yet another finger-pickin’ year set at the festival’s largest venue yet.

A culmination of blatant hipster culture paired with Crosby, Stills and Nash sensibilities, the day festival attracted concertgoers all across the spectrum, ranging from the friend your dad doesn’t understand to your dad himself.

Kicking off the day with short sets in the Greek’s plaza, festival attendees saw a number of artists warming up the crowd before the main stage performances began. Much like a county fair, folks could stroll around the grounds of The Greek, grab a drink and tri-tip sandwich all the while catching a few warbling notes of whomever had the gumption to sling a guitar at the moment.

Sam Outlaw, who closed out the slew of outdoor performances, drew a sizable crowd to the stage before people were allowed to take their seats inside.

“I can’t tell you what a thrill it is to almost play The Greek Theater,” joked Outlaw before launching into “Jesus Take The Wheel (And Drive Me To A Bar).”

Inside the Greek, the sparse stage promptly began its entertainment at 5 p.m. as promised, with Nashville star Johnny Fritz taking the spotlight.

Though only a five-song set, Fritz was accompanied by Dawes frontman Taylor Goldsmith, who provided twangy guitar licks to several Acappella numbers by Fritz.

“I just moved to LA from Tennessee 5 days ago and this is my first show here as a resident,” said Fritz to a cheering crowd. “This is a crazy. If I play The Greek in less than a week of living here what’s going to happen next month?”

Fritz was followed by all-female outfit Della Mae, whose boisterous and sultry stylings reminded those concertgoers a few drinks in that the music had indeed begun inside the actual Greek theater.

Della Mae defied the age-old mythos that only men can pluck and bow, providing both the music and vocals on a swinging set. The pit in front of the stage began to fill as the ladies from Della Mae blew through their set, ending with a seductive cover of The Rolling Stones classic “No Expectations.”

As the sun began to set and the seats found themselves warmed by denim and frivolous frontier clothing, actor Ed Helms strolled out on stage.

Helms, one of the founders and key organizers of the Bluegrass Situation, has been with the program since its early days at The Largo, according to the organization.

“Thank you all for coming out to The Greek Theater, this thing is getting so huge,” said Helms to a stunned crowd. “It’s weird, I didn’t know so many Greek people lived in Los Angeles.”

Following Helms’ interlude between acts, KCSN favorites The Lone Bellow took the stage to a wildly thunderous standing ovation from the crowd.

The Lone Bellow played their set as gregariously as ever, with a performance resembling less of a festival entry and more of a spiritual.

Frontman Zach Williams worked the crowd into a frenzy, maneuvering front and center on stage as he rallied the pit and hollered the lyrics from whatever cavern lies below the diaphragm.

Not to be outdone in performance antics, the Punch Brothers delivered a mostly acoustic yet auspiciously talented set of tunes in which best fit the genre of bluegrass.

With a profound amount of banjo and fiddle, the Brothers Punch played songs from their storied catalog as well as a decent amount of classical music oriented for the quintet, including Claude Debussy pieces.

The crowd was astonished by the musical proficiency of the group, throwing themselves into the air before a piece had concluded. The band moved effortlessly from bluegrass to classical to folk within a singular piece, begging the question as to why the Brooklyn-natives weren’t put on last.

“Most of our songs are about nihilistic qualities of life,” said mandolin player and lead singer Chris Thile. “So you know, enjoy yourself but remember that everything is nothing.”

Concluding the music of the night was Dawes, with the Herculean task of following Thile and company.

Still, the Los Angeles outfit kept the young people in the crowd satiated, playing tracks from their latest record “All Your Favorite Songs” and emulating that unique spot that lies between Springsteen and Jackson Browne.

Dawes was an energetic as possible despite the fact that frontman Goldsmith had been on the scene at the Greek since the early afternoon. The 9:45 p.m. slot can be unforgiving after a long day of making the rounds, but it certainly didn’t show in Dawes’ stage presence.

“The Bluegrass Situation puts together really cool concerts to help people discover new music and understand it together,” said Goldsmith. “They also make the dreams of the bands playing come true.”