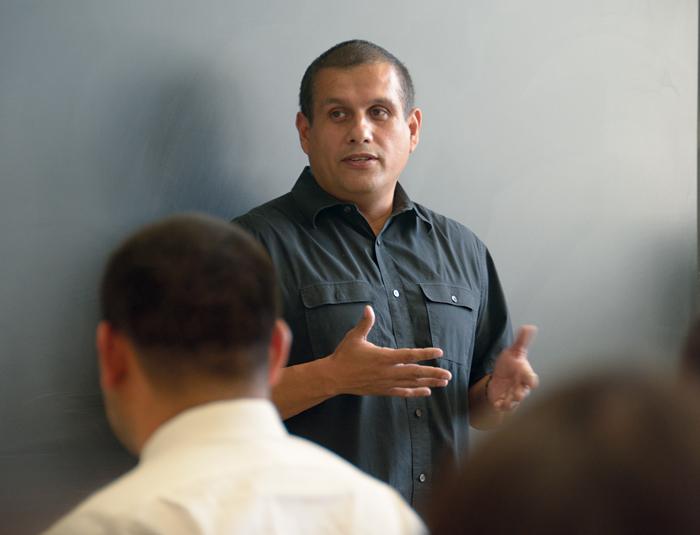 Professor Antonio Gallo lectures to his Constitutional Issues and the Chicano/a class. Gallo is a member of the California Faculty Association bargaining committee that is advocating for a five percent salary increase for all faculty. Photo credit: Raul Martinez

The California State University Board of Trustees and the California Faculty Association will meet for mediation Oct. 8 to settle salary compensation in their three-year contract.

Most of the contract was signed and settled last fall, yet due to discrepancies regarding future salary compensation, both sides agreed to reopen salary negotiations for the upcoming 2015–16 academic year.

Since bargaining reached an impasse, the next step in the process is mediation. During this stage a state agency is petitioned to oversee collective bargaining.

When negotiations reopened, the board stood by their original salary proposal: a two percent compensation pool increase for 2015–16 and 2016–17 academic years, which the CFA had already rejected last fall.

“SSIs benefit those at the lower end of the salary structure. They are a way for those at the bottom to move up steps over time,” said CFA Bargaining Chair Kevin Wehr. “It balances out as faculty with permanent jobs on the higher end of the pay scale retire. So our position is that the SSIs don’t even actually cost the university more money.”

The proposal was reached based on independent research and analysis of the CSU’s 2015-16 budget which was allotted an additional $269 million and includes $97 million added to the governor’s January budget, according to the CFA bargaining webpage.

However, the CSU has a different interpretation of these numbers.

In a web conference call on Sept. 18 to all CSU student media, CSU assistant vice chancellor of public affairs Laurie Weidner laid out the estimated expenditures of each salary plan. The CFA’s plan, according to Weidner, would cost $108.9 million.

“We have a limited budget, and we do our best to balance all of the priorities at the CSU to support student success,” said Weidner.

“So what would that $108.9 million fund if it was not funding compensation? It could fund 16,800 new students from California high schools and California community colleges coming into our systems,” Weidner added. “It could fund 16,000 new class sections across the CSU, which would greatly help with our impacted programs and campuses. It could fund the hiring of 1,000 more tenure-track faculty or 1,450 new staff and support staff.”

Some argue that the CSU’s priorities lie elsewhere.

A recent two percent salary increase to CSU presidents and other executives was approved in July. Cal Poly San Luis Obispo President Jeffrey D. Armstrong, one of the highest paid CSU presidents, will see his annual salary of more than $345,000 increase by nearly seven thousand dollars.

“They decided, prior to negotiations with faculty, to give presidents a pay raise. I agree that a president’s work is hard and they deserve as much money as anyone else, but it all balls [sic] down to a matter of priorities,” said Ivor Weiner, the CSUN chapter vice president of CFA. “The CSU said they needed to raise salaries for presidents because they can’t recruit. Well the same argument goes for faculty. There is enough money to go around.”

Although recruitment played a factor in determining the salary increase, the CSU noted the importance in the difference in the job roles.

“My question is: ‘is the role of a president the same as the role of a professor? Is the scope of the responsibility the same?’ And the answer is no,” Weidner* said. “Our presidents are CEOs of our campuses, and they’re overseeing operations close to the size of small cities. They oversee health centers, police departments, full academic buildings, and they are responsible for the physical solvency of their campuses.”

Regardless of the CSUs decision for the raise, the CFA notes the importance of their request.

“An increasing number of faculty have been falling out of the middle class. We ourselves got a lot of education believing that it would provide for us and our families while we educate and advance everyone else’s future as well,” said Jennifer Eagen, CFA president. “But it affects our students too. We have sunk to the point that, if we want to be creative teachers in the classroom and serve our students well, that for the most part, we have to do that work unpaid and in our spare time.”

According to Wehr, faculty have been falling behind for seven years on purchasing power for basic things like housing, food and living expenses.

“I’ve been here 25 years and I am not leaving. I love CSUN, the students, the workplace, and we have a good relationship with our administrators,” said Nate Thomas, president for the CSUN CFA chapter. “But I will say how disheartening it is to see the amount of faculty that have had to file bankruptcy in the past couple of years. We have some good faculty here, but they have degrees and those degrees cost. We have tons of faculty who just cannot pay their bills with this salary.”

The CFA’s request would benefit students and social equity as well, according to Eagen.

“We need teachers who want to teach students. The CSU is the largest public four-year university in the country. More than one third of CSU students are first-generation college students. Almost half are program-eligible, which means they come from families who can’t really afford to send them to college. Of the 20 most diverse colleges in the west, 10 of those are CSU campuses,” Eagen said. “So what happens at the CSU is important for social equity for the whole country, not just California.”

Without this raise, many believe that the value of education would greatly decline.

“Students ultimately suffer from this because … professors who can’t make ends meet will have added psychological stress. It will affect their work; they won’t be as motivated or be able to give as much,” Weiner said. “At the end of the day it’s also about insensitivity and the way this administration [CSU] has gone about devaluing their faculty.”

According to Antonio Gallo, CSUN member of the CFA bargaining committee, the lack of proper compensation would increase the risk of losing valuable professors.

“The increase is important because you want to retain good faculty members in the CSU,” Gallo said. “You don’t want well trained faculty to turn to UCs and private schools because they need the better salary.”

If no resolution is made on Oct. 8, both sides will move on to the fact-finding process where a neutral third party is chosen to hear both sides. With a representative from each bargaining team, the neutral party writes a report that recommends how the settlement could be achieved. The parties will then have 10 days to study the report and reach a settlement.

If the parties still have not come to a resolution, the process may begin again or a strike may occur depending on an Oct. 19 strike vote.

“The strike vote is for the [CFA] members,” Thomas said. “We are asking the members if they want to do a strike if we don’t end up with a settlement. If not, then we don’t.”

If a strike does occur, there is a possibility school may close. Yet, as the mediation day approaches, many faculty cannot stress one point enough.

*Editor’s note: An earlier version of this article misattributed this quote and has been corrected on Oct. 7 at 11 a.m.