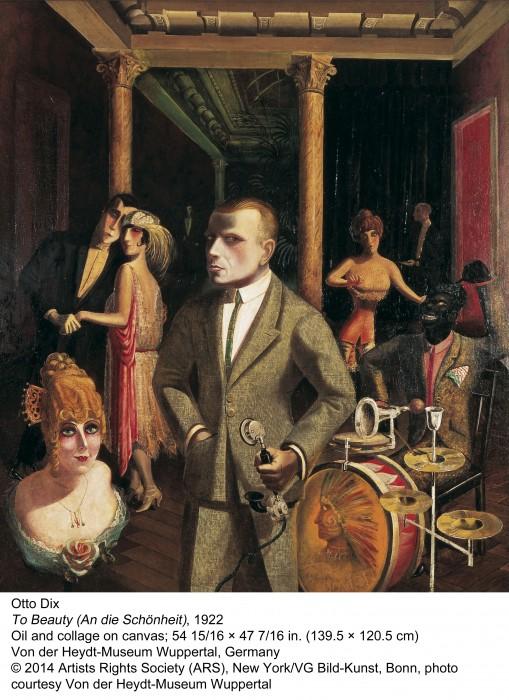 Otto Dix's oil painting titled "To Beauty" is one of the many pieces of modern German art displayed at the LACMA. Photo credit: LACMA

The artists of the New Objectivity movement shared a skepticism in terms of which direction Germany was moving towards, both artistically and politically, while struggling with immense human isolation.

The Los Angeles County Museum of Art is introducing the United State to its first comprehensive exhibit to explore the artwork of the New Objectivity movement, which began during the Weimar Republic, the first democracy of Germany.

The exhibit, New Objectivity: Modern German Art in the Weimar Republic shows that art between 1919-1933 in Germany was shown with less of a single style and more of a shared attitude that evolved between the end of World War I and Hitler’s Nazi Rise to power.

According to the museum, the art movement was dubbed “New Objectivity” or “Neue Sachlichkeit” in German, where participants “turned a cold eye on the new Germany: its crippled war veterans, desperate prostitutes, and alienated urban landscapes, but also its emancipated new woman, modern architecture, and mass-produced commodities”.

These artists captured their surroundings with “divergent styles that” created a sobering unsentimental and very graphic representation of what being in Germany was like during Hitler’s rise to power.

The New Objectivity exhibit’s catalogue seems to cover varying perspectives of the time. Some pieces show harrowing images of longing for a better future, along with a desire to revisit the past; while others explore depictions of fluidly changing ideas on sexuality and androgyny.

The overall theme of the exhibit seems to reflect the severity of a country’s historical mistreatment and document the many social, and political wrongs that plagued the artist’s every day lives.

The exhibition was organized by the Los Angeles County Museum of Art in association with the Museo Correr in Venice, Italy. The “New Objectivity” catalog confirms it “features nearly 200 paintings, photographs, drawings, and prints by more than 50 artists.”

The New Objectivity exhibit was curated by Sabine Eckman. Barron has been responsible for more than 100 exhibitions for the Los Angeles County Museum of Art, six of which include German art and politics.

The collection displayed at LACMA is “the first comprehensive exhibition in the United States to explore the dominant artistic trends of the period” according to a press release.

The artwork is organized into five distinct sections: Life in Democracy and the Aftermath of the War, The City and The Nature of The Landscape, Still Life and Commodities, Man and Machine, Identities: Type and Portraiture.

Many of the artists in this exhibition have composed pieces that show people in hunched over crumpled looking postures, children with eerily complacent looking faces, and creepy shadows. Much of the work points to the complex disillusionment that came with living in a post-World War I environment, while in the midst of the Nazis coming to power.

Barron explains “close examinations of this period still yield new insights into a complicated chapter in modern German art. With very different backgrounds, these artists – some among the most well- known artists of the century, while others are virtually unknown outside Germany – eschewed emotion, gesture, and ecstasy, and sought instead to record and unmask the world around them with a close, impersonal, restrained gaze.”

In today’s world much of our art and day-to-day interaction revolve around documenting, and very candidly, portraying the real. This is exhibit comes at a time that draws an interesting parallel as to how this was done in the tumultuous time of the Weimar Republic.

In January 1933, Adolf Hitler was assigned as chancellor of Germany and declared many of the artworks “degenerate”, bringing New Objectivity to its early end.