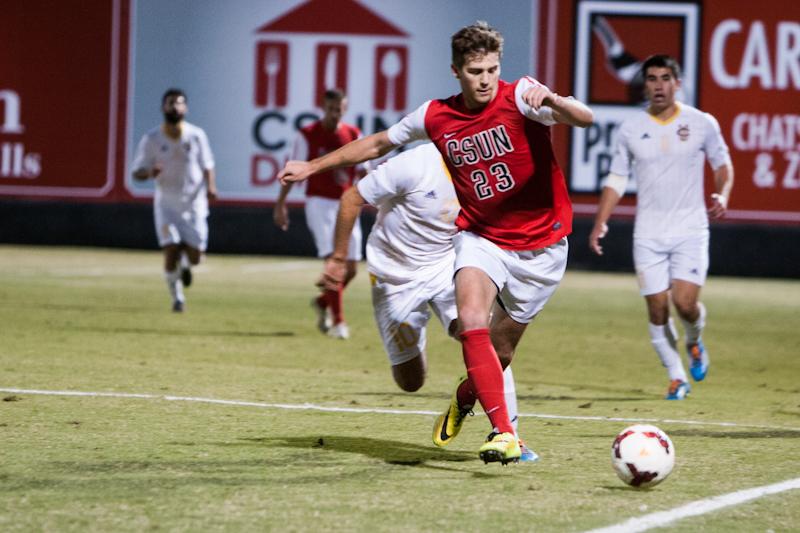 The Matadors will look to revitalize their offense in their pursuit of their first conference victory. Photo credit: File Photo/The Sundial

After a pair of losses to start Big West Conference play, CSUN (4-5-1) travels to Aggies Soccer Field to take on the University of Davis Aggies (5-6).

With a three-game wining streak, the Matadors looked to start conference play on a positive note, but after dropping their first two home games, the Matadors will rely on their current road success to get back on track.

The Aggies are coming off four wins in their previous five games and are 3-1 at home.

Yet again, CSUN’s defense will have to have a strong game and get help from the offense to minimize UCD’s threats as they have scored in every game.

UCD has 11 different players that have scored this season, led by senior midfielder Lucas Mohageg. He leads the team in both goals (5) and assists (3).

However, the Matadors will also have to focus on UCD senior midfielder Ryan Gross who has three goals.

CSUN’s offense will have to seize on limited opportunities, as UCD doesn’t allow many.

Heading into the game, the Aggies are only allowing 11.6 shots per game and UCD senior goalkeeper Kris Schultz has a 63.6 percent save rate and total of 26 saves.

UCD relies on their defense to counter, for the season they have outshot opponents (162-128) and have more shots on goals (78-59).

Defensively, CSUN has been great, but they will need the offense to get off to a fast start.

Despite only having 12 goals for the season, the Matadors should see the offense have a better performance as the Aggies have allowed 19 in total.

The Matadors have been efficient when they get shot opportunities as they have a 49.4 shot on goal percentage.

CSUN senior foward Carlos Gonzalez should be able to capitalize on scoring opportunities as he leads the team with four goals and has taken 12 shots with nine of those being on goal.

After nearly scoring in the previous game when his shot hit the right post, CSUN sophomore midfielder Steven Manios should also be a threat against the Aggies.

Although he hasn’t seen the back of the net in the previous eight games, Manios has two goals for the season tying him with sophomore forward Dean Wright and senior defender Trevor Morley for second most.

After having three consecutive saves in the final moments to force extra time in the previous game, CSUN senior goalkeeper Adam Hobbs will be a difference maker.

Hobbs heads into the game with 41 saves, 77.4 percent save rate and only 12 goals allowed.

CSUN has been currently successful against the Aggies as they have won three consecutive games and their last game ended in a draw.

The Matadors will look to make it four straight wins against the Aggies and first of conference play this Thursday at 4 p.m.