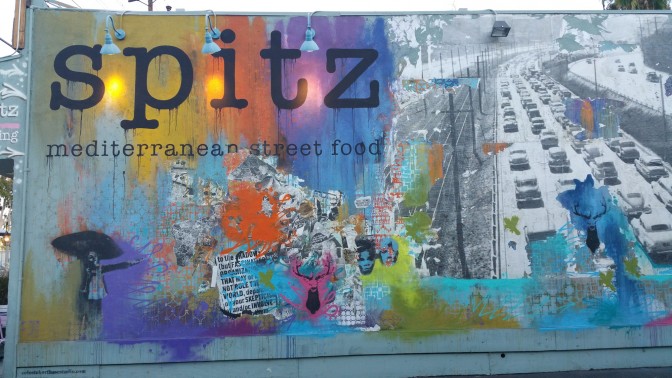 The colorful art outside the home of Spitz Photo credit: Edemy Rodriguez

A night out after a long day at school could not be better spent than at Spitz. It has a variety of tasty and healthy food, relaxing music, board games and great customer service.

Spitz is known as home of the “Döner Kebab,” which, according to the restaurant’s website, is a turkish phrase meaning “rotating meat;” the Döner Kebabs are cooked vertically on a rotating broiler.

Jacob Tweedy has been a server and a bartender at Spitz for over a year now, and said he has enjoyed working for Spitz, particularly because of their food.

“I have eaten everything from the menu,” Tweedy said. “And I’m so addicted to the food that I have to force myself not to eat it ’cause it’s so good.”

There is an artistic environment both inside and outside the restaurant that seems to draw people in to see what the buzz is about. With great music and people playing board games, it’s as if they were in the comfort of their own home.

The founders of Spitz are two college students from Occidental College in Los Angeles: Bryce Rademan and Robert Wicklund. They opened their first location in the spring of 2005, six months after they graduated. Ever since, the company has been successful and currently has five locations.

The staff greets people as they enter and say goodbye as they leave, adding to a friendly, comfortable atmosphere; it can be hard just to even leave.

Christian Avila has been working at the Studio City location as a bartender since it opened and said people really like the environment they walk into at Spitz, as well as the sangria.

The cost for a full meal, which includes either a wrap or a sandwich, a side of your choice of fries and a fountain drink, is about $15. However, it is worth the cost. If that price is a bit out of range, consider one of their salads, wraps or sandwiches by itself, which are just as filling.

A wrap or the sandwich can include up to three different meats with a selection of chicken, beef or lamb. Spitz allows customers to have every meat, which is great when it is too difficult to choose between the three. The wraps and sandwiches come with a variety of vegetables and tzatziki, a greek yogurt sauce. The sauce has a sweet yet sour taste that pairs well with anything on the menu.

Repeat customers, Jenni Alegria and Richard Martinez, were playing Jenga while waiting for their food, trying to avoid knocking the tower of blocks over while moving the blocks to the top. 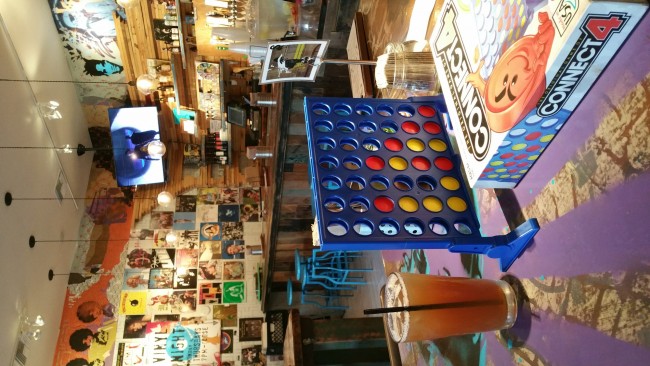 Alegria said she has been to another Spitz location besides Studio City and that she likes the ambience inside the restaurant in addition to the food.

“It’s pretty good, and it has vegetarian options,” Alegria said.

Martinez said he usually gets the street cart fries and considers the food overall to be of good quality.

“They always give you a lot of options as far as like either their meats, spices,” Martinez said, “and all the vegetables they throw in is amazing.”

Spitz in Studio City, located off of U.S. Route 101, opened about two years ago and is the restaurant’s third location. Other California locations include Eagle Rock, Little Tokyo and Los Feliz.

Spitz offers the option of ordering food online to pick up at the nearest location and take to go. The full menu is listed on their website.