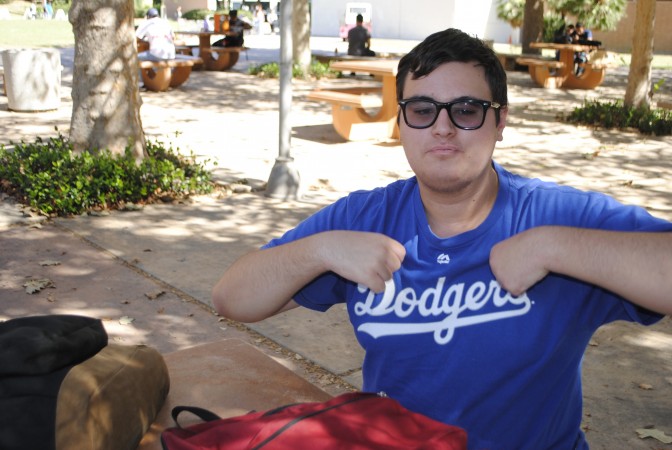 The Los Angeles Dodgers have clinched a playoff berth and CSUN students are excited, but they also remain weary.

Making the playoffs is not a new occurrence for the L.A, Dodgers, but last two postseasons have been disappointing outings. In 2013 and 2014, the Dodgers have not made it past the first round of the NLDS, falling to the St. Louis Cardinals both times.

Although making the playoffs is no easy feat, the Dodgers are held to the L.A. standard of pro sports, championship or bust.

However, the Dodgers boast one of the most loaded teams in a long time, they are led by their one-two-punch pitching rotation, with Cy Young winners Clayton Kershaw and Zack Greinke.

Despite having two of the best regular season pitchers on the roster, the reigning MVP Clayton Kershaw has struggled in the postseason. In 2014 Kershaw finished the regular season with a 1.77 ERA, in the second round loss to the Cardinals Kershaw finished with a dreadful 7.23 ERA. Kershaw is also winless in his last four playoff starts.

Although it’s almost a foregone conclusion in the MLB that Kershaw is the best pitcher in the league, many Dodgers fans remain pessimistic.

“I’m so ready for the playoffs,” said CSUN junior psychology major Dan Mayo. “But Clayton [Kershaw] needs to not choke in the postseason. “

Many argue it’s the first time in years that the Dodgers have another stud pitcher, and that Clayton shouldered all the pressure in previous outings.

This season the dodgers have another ace pitcher in Greinke, who is on the short list for the 2015 NL Cy Young award.

Many fans think Greinke’s success will elevate the Dodgers to the World Series.

“Zack is extremely underrated,” said undeclared freshman Adam Horne. “I think his [Greinke] all-star play will relieve the pressure Kershaw is under.”

They have also managed to amass one of the hardest hitting, and youngest, batting rotations. Led by all stars like Adrian Gonzalez, recently acquired Howie Kendrick, and the young up-and-coming players Cory Seager and Joc Pedersen, the Dodgers have a platoon of clutch hitters.

The Dodgers and Clayton Kershaw will open postseason play at 6 p.m., Friday, as they host the New York Mets and starting pitcher Jacob DeGrom.