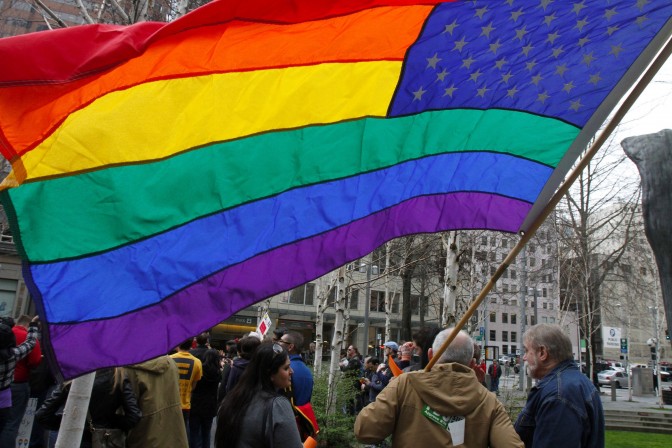 The Pride Center commemorated the 27th anniversary of National Coming Out Day in the University Student Union South Patio, then called the Pride Patio, with an “Express Yourself” wall, a photo booth and photo sleeve-decorating activities.

A “Proud to Be…” variety show started at 6 p.m. inside the Grand Salon with performances by CSUN a capella group Acasola, poets and comedians before students engaged in a LGBTQ history trivia game with prizes.

Coming out may not seem like a paramount step in the fight for equality, according to the Human Rights Campaign, but when people know someone who is LGBTQ, they are far more likely to support equality under the law.

The National Coming Out Day event is celebrated every year to honor the anniversary of the National March on Washington for lesbian and gay rights.

According to the Centers for Disease Control and Prevention, negative attitudes toward LGBTQ people put these youth at increased risk for violence compared with other students. These experiences can include behaviors such as bullying, teasing, harassment, physical assault and suicide-related behaviors.

The CDC also states that it is essentially important for LGBTQ individuals to attend a school that creates a safe and supportive learning environment for all students, as this helps them achieve good grades and maintain good mental and physical health.

“This exciting event is for students to celebrate and be proud of their identities and who they are,” said Sarina Loeb, Pride Center coordinator. “We here at CSUN want to help build a more inclusive campus, and this is one more important step forward to that goal.”

The Trevor Project, which provides crisis intervention and suicide prevention services to LGBTQ youth, says that LGBTQ youth are four times more likely to attempt suicide than their straight counterparts and four to six times more likely to suffer injury, poisoning or overdose that requires treatment from a doctor or nurse from these attempts.