Letter to the editor: investigate first, notify after 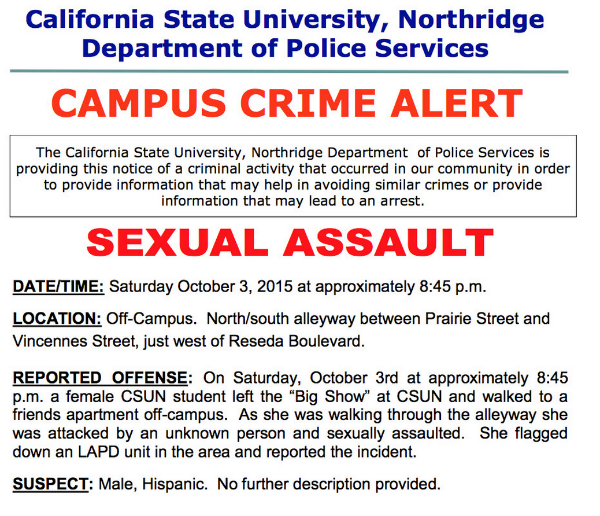 I am writing in response to a recent opinion piece in the Sundial entitled, “Where Was the Urgency?” The subject matter was the recent off campus sexual assault reported to the Los Angeles Police Department [LAPD] and an older on campus report of a sexual assault in CSUN housing. There are some very inaccurate statements and assumptions in this opinion piece that I feel compelled to answer as Chief of Police.

First, let me remind all readers that rape, often referred to as sexual assault, is treated with strict confidentiality which, under law, is the right of the victim. This means, on a practical level, police agencies, regardless of jurisdiction, cannot divulge details which could lead to the identity of the victim. This includes everything from a victim’s name, to the exact location of a rape and the circumstances surrounding the crime. What we can provide is information that a crime happened, general area where it happened, suspect description, possibly some very general circumstances and crime tips which are customized to deter that type of situation from happening. At times, suspect description is vague but the description is reported as described by the victim – however detailed or however vague.

Second, the writer of the opinion piece stated that no notifications for the rape in the University Park Apartments were sent out. This is highly inaccurate. The rape occurred on Saturday, Sept. 26 at 4 a.m. but was not reported to CSUN Police Services until the next day, Sunday, Sept. 27. A crime alert notification was issued on Sept. 28.

On Saturday Oct. 3, a CSUN student reported to the LAPD that she had been the victim of a rape off campus in the alleyway between Prairie Street and Vincennes Street, just west of Reseda Boulevard. She had left the area of the Big Show but the exact circumstances of why she left are not clearly known. Some are engaging in speculation that she was turned away or left on her own by friends. These details are part of the LAPD investigation and are not as yet known for a certainty. Speculation reported as fact, as it is in this opinion piece [the CSUN student was prevented from entering Big Show], is neither helpful or necessarily accurate. When the actual facts of the investigation become known, and if the information can be released without giving away the identity of the victim, then this information may be reported.

Contrary to the opinion piece, a crime alert for this rape was issued by Police Services on Oct. 5 and again, with a bit more detail which became known, on Oct. 6.

Despite the fact that the rape in the alley involved a CSUN student, it is still an LAPD investigation of a confidential matter. Regardless of the campus desire for all of the details, that simply cannot happen due to the legal requirements of confidentiality.

In situations where details of a crime cannot be released for reasons of law, it is very important to pay close attention to the crime prevention tips in the crime alerts or fall back on crime prevention information from our training classes for students on Rape Aggression Defense, etc. Our educational programs are listed in flyers, online and through postings. If you desire to speak to someone in Police Services on personal safety, we are always available to do so.