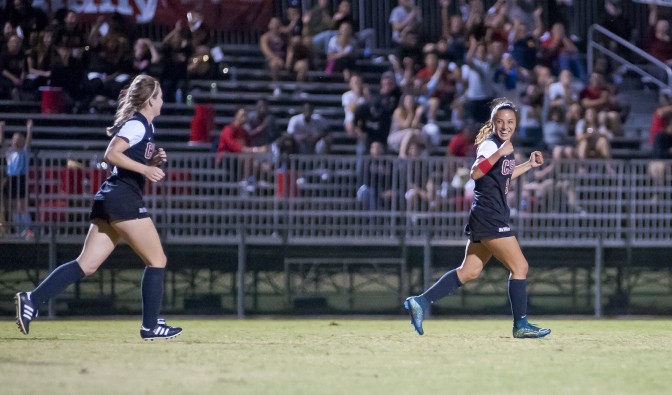 Matadors Cynthia Sanchez, middle, celebrates her first goal in the second half against the UC Irvine Anteaters on Thursday, Oct. 8, 2015 in Northridge, Calif. Sanchez has scored two goals in the second half of the game resulting a 2-0 victory over the Anteaters. Photo credit: David Hawkins

Early on, the Anteaters controlled possession and pace, taking four of the first five shots in the first 15 minutes.

However, the Matadors were undeterred, as the Anteaters came up empty handed on each of those tries.

“I couldn’t be more proud of how the team played as far as the character, attitude and their commitment to defense,” said CSUN head coach Keith West.

In spite of the fast offensive start by UC Irvine, the Matadors would gain their footing and bounce back, taking six more shots to the Anteaters’ one in the final 30 minutes of the half.

But just like the the Anteaters, the Matadors would come away with no goals, leading to a 0-0 tie going into the second half.

But after an evenly played first half, sophomore forward Cynthia Sanchez took the game into her own hands in the second half.

Following an exchange of shots by CSUN and UC Irvine, Sanchez was able to find the back of the net after striking the ball off a volley, slipping it past UC Irvine senior goalkeeper Corey Tobin into the bottom left corner of the goal.

After Sanchez’s goal, the Anteaters put their foot on the gas, attempting four of the next five shots, but CSUN’s defense held.

With the Anteaters’ focus shifted to scoring, their defense began to open up, providing Sanchez and the Matadors another chance at scoring.

That chance was realized in the 72nd minute when Sanchez streaked down the field to beat the goalkeeper on a one-on-one matchup.

Her goal not only put the Matadors up by two goals—and effectively sealed the game—but also put her atop the CSUN record books for most goals scored in a single season.

Although the scoring record and victory was a reason for praise and celebration, Sanchez and the Matadors understood that the game was much closer than the scoreline suggested.

“We’re going to take what we learned from this game, which was that, we may not have played the best soccer,” said Sanchez. “But we did bring enough energy to get the result that we wanted.”

The Anteaters even outshot the Matadors 13-15, and had more saves with 4-3. With those disadvantages showing themselves, the result is a teaching point moving forward, rather than an example of excellence.

“The girls played hard [and] we dodged some bullets out there,” said West. “But I think that’s a testament to the character of our team.”