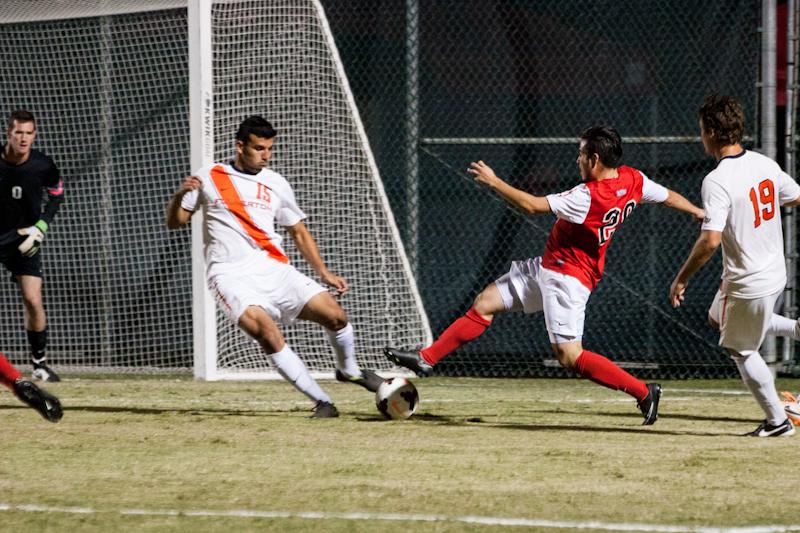 The Matadors fell behind early in the game as the Hornets scored within the first minute off a goal from freshman forward, Brad Bumgarner, his fourth of the season.

CSUN had multiple opportunities to score in the first half, but they were unable to find the back of the net.

Senior forward, Carlos Gonzalez was able to get off two shots, but his first shot was blocked and his second was saved by Hornets sophomore goalkeeper, James Del Curto.

Also getting off shots for the Matadors in the first half were freshman defender, Jumoke Hutton, senior defender Tanner Snedigar, sophomore forward Dean Wright, and sophomore midfielder Steven Manios.

While the Matadors struggled to score, their defense prevented the Hornets from rattling off any more goals, and senior goalkeeper Adam Hobbs was able to match his Hornets counterpart, Del Curto, with two saves as well in the first half.

The second half of the match would prove to be a much different story for the Matadors.

It did not take them long to even up the score as senior midfielder David Turcios kicked in his first goal of the game, and second of the season, a mere 41 seconds in to the half.

The Matadors aggressiveness would continue as they got off two more shots, one by junior defender Shane Steffes and the other by freshman defender Stuart Close, before the Hornets got off one of their own.

With the game going back and forth for a few minutes, Turcios would find the net once again at the 62nd minute mark to give the Matadors a 2-1 lead they never relinquished. The goal was assisted by Wright.

While the Hornets would outshoot the Matadors from that point on, the CSUN defense held firm, with Hobbs recording another two saves, and they kept the Hornets off the scoreboard for the remainder of the game.

Overall, the Hornets outshot the Matadors, 16-14, including 6-5 shots on goal. The Matadors were also whistled for three yellow cards, one on junior defender Patrick Hickman, the second on Turcios, and the third on the CSUN bench.

After completing a two game road trip, the Matadors will return home on Wednesday, Oct. 14 against the California State University, Fullerton Titans. Kickoff is scheduled for 7 p.m.