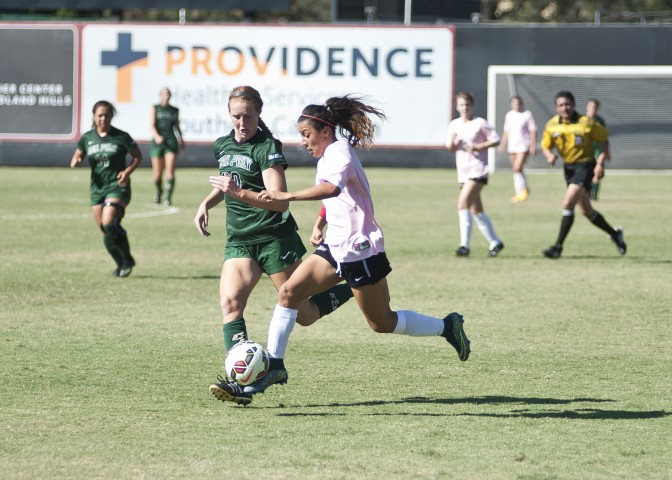 Both teams wasted no time asserting themselves on the offensive end, as they traded shots in the first ten minutes.

However, it was the Matadors that would capitalize first when junior midfielder Kourtney Kutscher scored her fourth goal of the season when senior midfielder Lyndsey Preston and sophomore forward Cynthia Sanchez found Kutscher in the box for a 14th minute goal.

With the lead in hand, the Matadors were not done displaying their offensive skill either.

A mere 67 seconds after Kutscher’s goal, Sanchez also found the back of the net, when Kutscher dropped a long pass in front of her, allowing her to beat the Mustangs’ goalkeeper for a 2-0 CSUN lead.

The goal was Sanchez’s 11th of the season, and also tied her with Brianna Monka for most points in a season.

Despite the quick start, Cal Poly did not let up, as they had four more shots in the half, including a goal in the 31st minute by senior defender Allie Begin, who headed it in off of one of Cal Poly’s three corner kicks in the half.

Although the Mustangs were able to get some momentum from Begin’s goal, the rest of the half belonged to CSUN, as they would get another three shots.

Even though the Matadors came into the second half nursing a one-goal lead, they did play any more conservatively, still out-shooting the Mustangs 7-4 in the half.

Moreover, CSUN had the opportunity to stretch the lead when junior midfielder Krystal Kutscher’s shot in the 43rd minute ricocheted off of the crossbar.

For the half, CSUN also had six corner kicks to Cal Poly’s zero.

The Matadors will look to continue their strong play as they travel to the University of Hawaii to play the Rainbow Wahine at 8 p.m.