The holes in the NCAA’s handling of sexual assault allegations 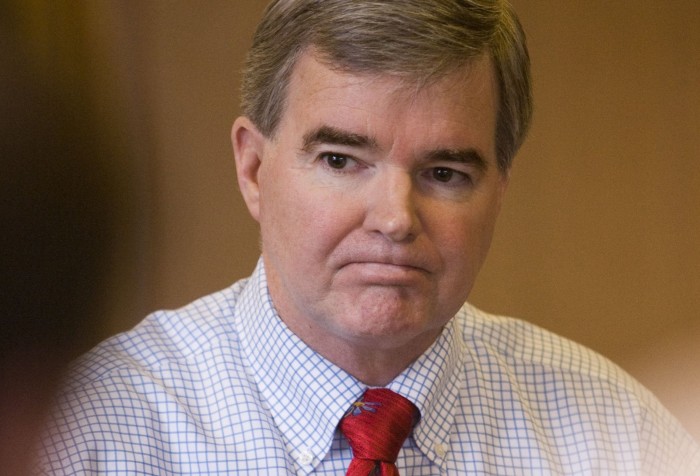 NCAA president Mark Emmert pusehd for a handbook that was issued by the NCAA in September 2014, shortley after he acknowledged issues with colleges' handling of sexual misconduct among student-athletes. (Mike Siegel/Seattle Times/MCT)

It is evident that, even in 2015, sexual misconduct and assault are not scarce or rare on college campuses. According to a fact sheet published by the National Sexual Violence Resource Center, one in five women and one in 16 men are sexually assaulted in college, with 90 percent of these occurrences never being reported.

With that alarming level of frequency among the general student population, it’s no surprise that student-athletes are also involved in sexual assault.

The lack of regulation in the system has not hindered CSUN’s approach to student-athletes and sexual assault, however.

“We haven’t had any problems, to be honest,” said Amy Millstone, associate athletic director of strategic communications at CSUN, “which means that we’re doing something right.”

In spite of the success at CSUN, several schools across the country leave it up to their athletics departments to manage and oversee allegations of sexual misconduct against their student-athletes, creating a conflict of interest.

A 2014 survey of 236 colleges and universities scattered across three NCAA divisions, conducted by the office of Missouri Sen. Claire McCaskill, found more than 20 percent of those institutions have that level of jurisdiction when dealing with sexual misconduct allegations.

And in a July 2014 senate hearing, McCaskill addressed her concerns for victims of sexual misconduct because of the varying levels of jurisdiction on college campuses.

“If you’re a victim and you know your allegation is going to handled by the athletic department, as opposed to any other student on campus, who’s handled in a different system,” McCaskill said, “why in the world did you think the process was going to be fair?”

During the same 2014 senate hearing, those close to the system, like NCAA president Mark Emmert, acknowledged the paradoxical nature in which these sexual misconduct cases are handled, but without offering a solution.

“The fact that this is really inappropriate and we need to find ways that athletics departments are not the ones who are responsible for the adjudication of these issues,” said Emmert.

At CSUN though, there appears to be a joint system in which the athletics department would work and comply with, the university as a whole to address sexual misconduct allegations among student athletes.

“Anything that would relate to this sort of thing would be in partnership with the university; I can’t speak to a specific because it hasn’t happened,” Millstone. “But just like everything, it would be hand in hand with the university supporting each other.”

Another point of contention is what universities do to help train and educate athletes on sexual assault and violence beforehand, rather than waiting until there is evidence of harm to act.

This is in spite of statistics gathered by author and journalist Jeff Benedict, who in 1994 studied 10 Division I schools with prominent football and basketball programs. He found that even though three percent of the male student population was made up of student-athletes, that demographic was responsible for 19 percent of the school’s sexual assaults.

But at CSUN, the athletics department not only has representatives from the Sexual Violence Prevention Committee, the campus organization tasked with annually reviewing the campus Sexual Assault Policy, speak to athletes and coaches about how to watch out for and prevent sexual assault, but it also has its own representative in the organization.

“But I can tell you, by the athletics perspective, we are very active in that,” Millstone said in reference to sexual assault prevention training. “And we use it as a way to educate all of our student-athletes about prevention.”

In addition to its involvement with the Sexual Violence Prevention Committee, the department also has student-athletes participate in public service announcements against sexual assault, as well as tabling events where they encourage fellow students to take a pledge against sexual assault.

The NCAA even issued a handbook in September 2014 that asserts that athletic departments should, “Educate all student-athletes, coaches and staff about sexual violence prevention, intervention and response,” and “Know and follow campus protocol for reporting incidents of sexual violence and report immediately any suspected sexual violence to appropriate campus offices for investigation and adjudication.”

Those assertions are integral to campus communities like CSUN, which has reported one sexual assault and one rape in the past month. And that has not gone unnoticed by the athletics department either.

“I wouldn’t say that we’ve done anything extra or above and beyond, because I think that very honestly we’ve done a good job already,” Millstone said. “All I would say is that student-athletes on this campus are proud Matadors and representative of this university in all that they do.”