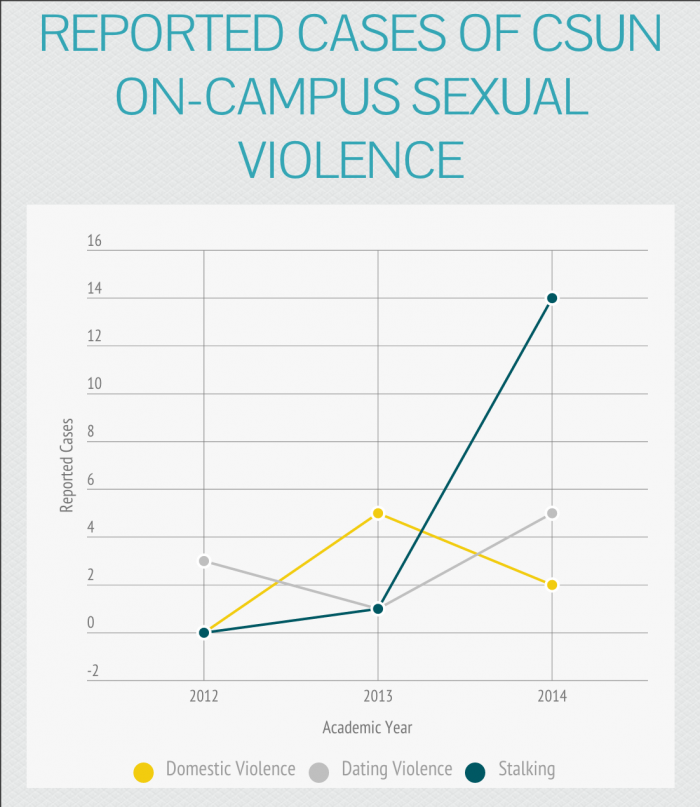 CSUN saw a spike in reported incidents of sexual violence crimes according to a report from CSUN officials, but the numbers still are not adding up when it comes to reports of sexual assault crimes.

One in six women have been the victim of an attempted or completed rape in their lifetime, according to statistics from the Rape, Abuse & Incest National Network, but the release of the 2014 Clery Report shows that CSUN students are still under-reporting sexual assault crimes.

This semester, we have already had two reported rapes on-campus and one near campus.

CSUN has never done well in terms of students reporting rapes, and it has been that way for more than 20 years, says Police Chief Anne P. Glavin of CSUN’s campus police department.

Women between the ages of 18 – 24 that are enrolled in college are three times more likely to suffer from sexual violence than women in general, according to RAINN. Men between the same ages are 78 percent more likely to be the victim of a rape or sexual assault than the general man.

According to the report which is meant to provide an overview of crimes on and off-campus, in 2014 there were a total of 21 sexual violence crimes reported. There were two instances of domestic violence, five instances of dating violence and 14 instances of stalking reported.

“We are seeing an uptick in some of the sexual violence categories, and that’s exactly what we wanted to see,” said Glavin. “If we did not see that, or say it was minimal, by maybe only one or two, I would be very concerned our campaigns aren’t working.”

Some of those campaigns include the plan to help prevent sexual assault, Strength United, Matador Patrol and the multiple workshops offered to students include self-defense training and how to use pepper spray.

Glavin said when someone walks through the door to report that they have been victimized, it is a small victory for her and the rest of the police department. This means that the victim was comfortable enough to come forward.

“That’s how I want students to feel and everyone else in our community to feel on our campus,” said Glavin. “Yeah, we are the police department but we are humans, we feel too. I hurt for every victim that walks through the door, and I want to put all of our services right in front of them and help them as much as we can.”

Glavin said one of the biggest problems is the “trust issue.” The person could be someone that you just met at a party, that doesn’t fit the status of friend but you have hit it off with.

“There is this tendency to put trust in somebody in that moment, even though you just met that person at a social engagement,” she said. “I [the victim] put a trust in [someone] that I really shouldn’t put there. Because even if all goes well and the night ends and we go our separate ways, I still don’t really know that person.”

In the event that a victim wants to report a sexual violence crime, an officer is able to meet the victim in a private place of their choice and will also have a female officer available on request whenever possible, according to the CSUN police webpage.

The police department can set victims up with hospital treatment or other medical needs, counseling services and emergency housing and help to keep the victim fully informed about the investigation or prosecution, according to the webpage.

Victims are also allowed to request that their names be kept confidential, according to the Clery report.

There are also sexual assault and domestic violence counselors and advocates on hand to help victims of sexual misconduct, dating or domestic abuse or stalking, according to the report.

“I want to see the number increase, and that is our goal, if all of the programs and things are working,” said Glavin. “But part of me knows, with 40 years of doing this, that somethings don’t change. And it is very difficult as an individual to get over the issue of coming to terms with what happened to you.”